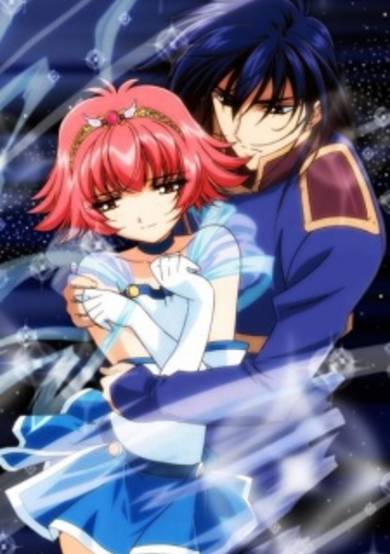 A sixteen-year-old girl is struggling to adjust to a new step-family when seven guys appear on the scene revealing that she possesses a special magical power. Shying away from the strange group, she later joins them when a monster places her friend's life in jeopardy. Without training, she must prove herself capable to take up the sacred duty of the Pretear. They must resolve their differences and work together to defeat the evil princess intent on destruction. (Source: FUNimation)

The Wind of Fate

A green, bubbling light shines out from the darkness. As it grows brighter, a man's voice says, ""Liefe [pronounced 'leaf']: it is the life in all things."" The light swirls in on itself and contracts. ""Liefe: the power which all living things carry. In both men and women..."" The light becomes a shadow, one of a teenage girl. { Screen Shot } Her arms are stretched out in a ""T"" position. Behind her appears another shadow, this of a young man. ""When Pretear's Liefe and a Knight's Liefe are combined, a new power is born..."" In a peaceful, green land, a little pink bird is snoozing away on a leaf as a fish flies by. (Above the water.) A shadow comes over the land, and violet-black crystals shoot out of the ground, next to a small lake. The bird freaks out. { Screen Shot } Next, a dragon like crystal leaps at it - only to be smashed by the magic powers of a long haired man dressed in dark violet, non-modern clothing. { Screen Shot } (His profile is the same one in the beginning, for the ""Lie

Let Me Hear Your Heart Flutter

Himeno has decided to accept her destiny, but she's going to need a lot more training if she's really going to be a Pretear. She's far too inexperienced with combat for Hayate's liking, a fact that pits the two against one another in a battle of insults. Luckily, Sasame is a little more understanding, and willing to teach her the tricks of the trade.

The Way of Becoming Pretear

The training continues, and while Himeno seems to have made a great deal of progress, Hayate still isn't convinced of her skills, and puts her through another series of tests that she ultimately fails. But, it seems that he may very well have more confidence that he will reveal, but another demon attack is going to put any sort of praise on the back burner.

A Promise Made Under the Sunlight

Kei has been working on a program to predict where the demons will strike, and it seems that the next probably location is Himeno's home. Determined to stop it, Hajime, Mannen, and Shin run off to try and locate the demon, and Himeno is right there for the quest. Unfortunately, so is the family butler, Mr. Tanaka, who is more than willing to help, and introduces the group to some of the houses more interesting sides.

Himeno has been having nightmares about the Princess of Destruction, and after Hayate finds out, he decides that it's his duty to guard her. The other Knights won't have any of that however, not without being able to protect her as well. But, Himeno's dreams become a reality when a demon larva arrives.

Himeno tries to focus harder to become more beneficial to the Leafe Knights cause, but what she really wants to know is who the Princess of Destruction is, and she convinces the kids to take her to their homeland of Leafenia. While they try and keep it a secret from the others, they unfortunately get caught, but scolding will have to wait when another larva attacks.

Hayate finally gives Himeno the details on who the Princess of Destruction came into existence in the first. The Leafe Knights also search for the lone demon larva that escaped after the last battle, but their efforts are in vein as it is merely a trap set by the Princess to lure Himeno to her and break down her confidence.

Himeno has lost her ability to Prét, although it could simply be the fact of having discovered the truth about who the Princess of Drestruction really is. As a result, she isolates herself from the Leafe Knights for a short time to sort through her emotions, but finds some emotional support from a very unlikely source: Mawata.

Still unable to find the strength to protect anyone, Himeno continues to find the power within herself. Meanwhile, another demon is lurking about the Awayuki residence, but Karou thinks perhaps its a ghost and enlists (forces) everyone to help him track it down. The Princess of Destruction however revels that she is much closer than anyone thought, and it seems that one of the Leafe Knights is still in love with her and willing to anything in order to be by her side.

The Furthest Ends of One's Emotions

Sasame has confessed his love for Takako, and she is more than happy to take him by her side as her very own Dark Knight. Himeno might have finally found the power to become the Prétear once again, but this tragic turn of events is slowly taking its toll on the Knights, and things get much worse when Takako comes to Leafenia with her new Knight by her side

If there's one word that sums up "Pretear", that word would be "cliched". It's not a word I personally use all that often, but whilst watching "Pretear", I couldn't help but have that word pop into my head constantly. The whole magic girl setting is a well treaded premises, but usually there would be at least something that gives the show a sense of identity, something that helps distinguish it in some small way. That something is absent in "Pretear".And as I watched, the cliches piled on one after another: the generic character designs; the overused magical girl transformation sequences; the annoyingly loud heorine; the emotionless bishounen architype; the stereotypical villain with the signiture evil manic laughter. In fact the villain overused the evil laughter to the point of obsession. What's more, she had a textbook backstory that I predicted waaay before they tried to sell it off as a big twist. That's also far from being the only predictable part of the story, but I'll refrain from giving out specifics in order to avoid spoilers (given the predictable nature of most of the twists though, I use the term "spoilers" loosely).On occasion, "Pretear" did manage to surprise me, but only because thoseplot developments are feels so sudden and random that it was like they were made up half way through - there's no sense of things clicking together, no sense of "ahhh that explains why in that earlier episode this person did that" kind of thing.But despite the dubious plot execution, the stale, over the top comedy tropes, the terrible lack of originality in general, etc, "Pretear" isn't that bad a show to watch. The last few episodes are particularly good and appropriately climatic, even through the deja vu inducing "I'M NOT GIVING UP!!!" battle of wills scenes. The reason "Pretear" isn't a bad show is simple: even though nearly everything it does have been done more than a few times before, it still does it pretty well, and it succeeds to be a lot more than the sum of its unimpressive parts. Overall, "Pretear" is a decent watch, no more no less.

To sum it all...I'd say that there needs to be more action into this anime. It's very cliche though, but overall I did enjoy watching it.

Start a new discussion for Shin Shirayuki-hime Densetsu Prétear anime. Please be fair to others, for the full rules do refer to the Discussion Rules page.