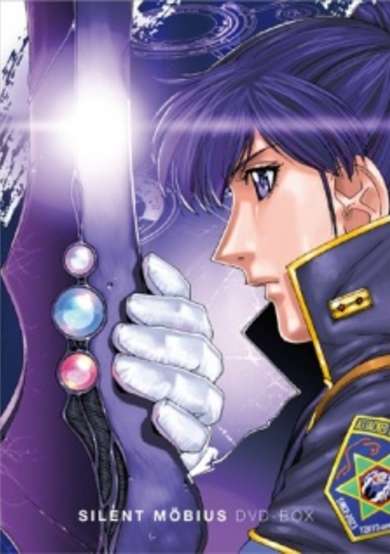 The year is 2023 and Alien Beings known as "Lucifer Hawks" have begun invading earth from another dimension. All that stands between them and the enslavement of the human race is the Attacked Mystification Police Department - a special division of the Tokyo Police staffed by women with amazing paranormal abilities. (Source: ANN)
User Count1078
Favorites Count3
Start Date29th Jan 1998
Next ReleaseInvalid date
Popularity Rank4659
Rating Rank5681
Age RatingPG
Age Rating GuideTeens 13 or older
SubtypeTV
Statusfinished

The year is 2024, and it's a rainy night in Tokyo. Getting soaked is the least of one man's troubles, however, as he is fleeing from something that has him visibly shaken. One wrong turn down an alley, and the man becomes a bloody crime scene, courtesy of a towering, shadowy figure. Two detectives converge on the alley to collect evidence, but they're interrupted by four females belonging to AMP (the Attacked Mystification Police Department), a division of the Tokyo police force. Judging from how they are greeted by the two male cops, their organization doesn't command much respect from others in the department. AMP is there because they specialize in destroying the Lucifer Hawk, the perpetrator of this crime and a life form discovered at the turn of the century that feeds on humans. Unfortunately, the creature is still around, and emerges from through a wall ready for another meal. Something, however, captures its attention and it takes off in pursuit. What the Lucifer Hawk s

Haunted by visions of her deceased mother, Katsumi Liqueur heads off to Tokyo at the request of Rally Cheyenne, a police officer who claims to have information concerning her mother's mysterious death several years earlier. Expecting a smooth landing, Katsumi instead notices the Lucifer Hawk that sensed her arrival to the city standing on the wing of her plane. She awakens to burning pieces of the aircraft -- and to the creature as well, which chases her down and corners her. The members of AMP arrive just in time, but their efforts to control the Lucifer Hawk are for the most part ineffective. Katsumi then calls upon a power she herself didn't realize she had, and destroys the creature. Cheyenne arrives shortly afterwards to explain as much as she can. Though information concerning the threat she just faced is scarce, it is known that there are three types of Lucifer Hawks. Category one is the most plentiful but least intelligent, and category two is somewhat smarter, and cap

Upset over the real reason Rally Cheyenne brought her to Tokyo. Despite what they thought was an adequate barrier against the Lucifer Hawk, one manages to penetrate AMP's defenses and make contact with a sleeping Katsumi. By the time two officers reach her room, a category-three Lucifer Hawk has already shown Katsumi secrets from her past. What she learns is apparently interesting enough to make her go to police headquarters with her two AMP bodyguards. While there, she again meets up with the creature that offered her a glimpse into her past. To the dismay of AMP, she seemingly decides to join him in their world, a place called Nemesis. She ultimately rejects the creature, but she'll have some backup against his future wrath, as she finally accepts AMP's invitation to join their elite force. There's only one small problem -- she was a secretary in Hawaii only days earlier, and her utter lack of skill clearly shows through. To ensure her improvement, AMP brings in a talented bu

Although Katsumi has been invited by Rally Cheyenne to join AMP, she still needs police training. And based on her abysmal performance, she'll need all the help she can get. A police sergeant just back from suspension is assigned to act as her tutor. He has his work cut out for him. Though they crash land in the most dangerous part of the city, Katsumi is able to carry her injured and unconscious partner to safety, barely eluding a gang of masked criminals with a particularly strong hatred for cops. The sergeant never thought she'd get as far as she did, which can only mean that her training is complete. Unfortunately, his problem with authority may have rubbed off on Katsumi, because she disobeys orders and runs off from the rest of the group to confront a category two Lucifer Hawk on her own. When she's confronted by Cheyenne she makes things worse by saying that she thought she could fight the creature by herself. This enrages her boss and alienates her teammates, who consi

Let's Have A Party

Katsumi isn't on the job very long before she starts making waves, as her disregard for orders incurs the wrath of both her superior and teammates. Though she truly believed she was capable of confronting a Lucifer Hawk on her own, the only thanks she receives comes in the form of a stern reprimand from Rally Cheyenne and a cold shoulder from the others. How does Katsumi respond? By again striking out on her own to chase down a Lucifer Hawk. This time, however, she walks right into an ambush and is quickly surrounded by far more of the creatures than she can possibly handle on her own. Yuki, the only AMP member who has made any effort to get to know Katsumi, has just finished a long heart-to-heart talk with her, so she's luckily close enough to send out a distress signal. Thanks to some persuasive words from Yuki, Katsumi finally earns the friendship of all the AMP members. Fighting side-by-side against a Lucifer Hawk proves to be quite a bonding experience as well. Though eve

The Lucifer Hawks haven't shown their faces much lately, which means a lot of sitting around for the AMP. Most of the group relishes this rare opportunity to relax, but Kiddy, the muscle behind the group, gets antsy when she isn't killing something. Luckily for her, Sergeant Ralph Bombers is heading her way in the corridor. She has already choked him twice during the course of AMP's investigations, and she also beat him up at their recent party, throwing him into a pile of garbage for good measure. For some reason, Bombers still hasn't learned his lesson. He just loves to get under her skin, and this latest confrontation is no exception, as she chokes him again. His response to the latest beating? He asks her out on a date, and for some strange reason, Kiddy says yes. They of course argue throughout dinner, but he must be a glutton for punishment, because he asks her out again. They argue over everything from his boring personality and her need for a makeover to what vegetable is

Though things got off to a rocky start, Kiddy's relationship with Sergeant Ralph Bombers seems to be working out, or at least that's what the grin on her face at work would lead her AMP teammates to believe. Emerging from yet another daydream, Kiddy finds the rest of the group laughing at her giddiness, and she's none too happy about it. She needn't be embarrassed for very long, however, as attention shifts toward Nami Yamigumo's shocking revelation that she never even thinks about having a boyfriend. Nami usually keeps her feelings bottled up, but this statement is far too interesting not to investigate further. Unfortunately, any probe into her personal life will have to wait, as Nami's sister unexpectedly arrives at AMP headquarters with the intention of brining her home. At her grandfather's request, Nami is to take a leave of absence from her police duties so that he may pass on to her a sacred sword in a ceremony naming her as heir to the powerful and revered Yamigumo clan.

The category three Lucifer Hawk that has appeared to Katsumi Liqueur twice in the past has resurfaced, still intent of bringing her back to his world. The outcome of their rooftop battle is different from the last time they met, however, as the creature has had ample time to analyze her powers, meaning Katsumi's spells are no longer effective. The Lucifer Hawk also swore after their last confrontation that he would show no mercy the next time they met, and he's got Katsumi right where he wants her, dangling helplessly from the end of a pole. At the last possible second, Katsumi uses her dagger to wound her unsuspecting assailant, but she is herself badly injured as a result and must be hospitalized. Katsumi's father brought the Lucifer Hawk into this world, which is why they feel it's her responsibility to open the gates of Nemesis for them. It's for that reason that they'll never stop hunting Katsumi, and why she's particularly vulnerable now, unconscious in a hospital bed. H

An encounter with a category three Lucifer Hawk leaves Katsumi badly injured, but the hospital is the safest place for her to be, considering that the creature is still on her trail. A strange voice in her head, however, prompts Katsumi to leave behind the AMP protective barrier that surrounds the building, an action that places her in grave danger. Surprisingly, the voice does not belong to the Lucifer Hawk, but rather to Grosspoliner, the mystical sword that once belonged to her father. Freeing Grosspoliner from the tower that has served as its prison since the turn of the century, Katsumi finds both a new companion and a powerful ally in the battle against the Lucifer Hawks. Katsumi is eventually healthy enough to return to active duty, but it's her life outside of work that's now in shambles, as she learns that her apartment has been destroyed. Unfortunately, payday isn't anytime soon, so a hotel is out of the question. Instead, it looks as if she and Grosspoliner will be spe

Three little girls have escaped from a prison-like facility, but they aren't safe yet, as the vehicle in pursuit is unwilling to let them go so easily. One of the girls points to the city of Tokyo across the bay, and tells the other two, named Lisa and Hiroko, that there are people there who can help them. Despite the rough seas in front of them, death is apparently a better fate than what they just left behind, and they jump in. It turns out that the third girl instructing them to jump was Yuki, whose bubbly demeanor belies this troubled past. The smile leaves her face, however, when she sees a news report at AMP headquarters about the recent murder of two women -- named Lisa and Hiroko. Troubled by the news, Yuki leaves work early and finds herself reminiscing about her two deceased friends. She is interrupted by a shadowy figure approaching her door, which turns out to be Annie, another friend from the past, who warns Yuki that someone is trying to get rid of them. Yuki comfor

Start a new discussion for Silent Möbius anime. Please be fair to others, for the full rules do refer to the Discussion Rules page.