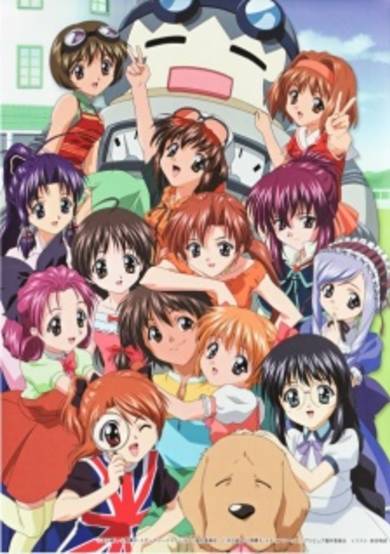 Wataru Minakami is a top student who failed his high school entrance exam because of a computer glitch. He later discovered that he was accepted to Stargazer Hill Academy, which is located at a mysterious place called Promised Island. At the request of his father, Wataru is whisked away to the island, and before he can settle in, a dozen of cute and charming girls start to flock him and claim to be his younger sisters. As Wataru gets closer to his newfound siblings, a deeper mystery as to why they were sent to the island comes to play. (Source: ANN)

After failing to pass a high school entrance exam, Wataru is unexpectedly whisked to Promised Island, where he meets four girls who turn out to be his sisters.

I Love Big Brother So Much!

A chain of initially unexplained events leads Wataru to meet his eight other sisters.

Together With Dear Brother

Wataru and his sisters go on their first day of school, but Wataru is feeling the pressure to watch over them.

Wataru helps Hinako search for her teddy bear, even if that teddy bear only appears in her dreams.

The sisters are beginning to be suspicious about the numerous e-mail messages Wataru receives. So they each send their own.

Big Brother is a Prince

Wataru plays a prince in a play. His twelve sister get into the act, too.

Simple fun with the laundry turned into play as the sisters dress themselves up as brides.

One Day Two of Us

Wataru spends a day with Marie. Marie, however, becomes sick because of a downpour.

Wataru spends his initial summer days with his sisters.

Do Your Best, Big Bro!

Mamoru teaches her Big Bro Wataru how to swim.

Sister Princess is a 26 episode series based on the light novels, and subsequent video games, of the same name.  The adaption is from Zexcs, also known as "that company that made My-Hime and Da Capo", and barely follows the already somewhat lose plot of the original. That being said, it's actually not that bad. The premise of Sister Princess is, you got Wataru Minakami, this ordinary guy, well, as ordinary as you can be for being rich and a total loser, that fails the exams for his only choice of high school. As a result, he gets kidnapped by tweedle-dee and tweedle-dum and is sent to a school on an island where he finds out that he has not one, but twelve sisters of varying ages that he never knew about, look nothing alike, and seem to come from different countries. Hilarity ensues. Before I go any further, no, it is never mentioned whether his father is a playboy, mother is a whore, or how in the vast cosmos you could have twelve sisters that have no resemblance to each other. The premise sounds like a set-up for an incestual harem anime, but actually, it works rather well as a plain old comedy about sisters that love their brother and cause humorous or heartwarming situations. I would at most call it a "Family Harem".  The series is "clean", and by that I mean if you dislike fanservice(I don't), then you will have no problem with this show as there is slim to none; there would be very few qualms showing this series to kids. If you have any problems with incest(I don't), then you may turned off to know that there is a bit of incestual sub-text, but you will be glad to know that is mainly restricted to small teases from the seductive, sexy, eldest sister, Sakuya. Beyond that, the sisters genuinely love their brother, and by that I mean in the "my older brother is always there for me" way, and not the "I want to foodangle him" way. As stated, I would call this a "Family Harem" anime. The main plot of the series is not about these girls throwing themselves at Wataru, but about how his life is slowly changed little-by-little because of his sisters. It does follow some of the tropes of harems, such as episodes focusing on him getting closer to one specific character, but it is never romantic and always humorous and heartwarming. He starts off as a loser, but by the end becomes a pretty cool guy as a result of his sisters. In this way, the series has some character development, nothing deep, but it's there which is a plus. The series remains good throughout. It is consistently funny, not gut-bursting, but decent chuckle worthy. The series also has some nice touching moments, nothing big, but you'll probably smile from them. All that being said, the series has a slow pace at times, a couple of the less interesting episodes nearly slow enough to bore. The designs of the characters are nothing that special, but they fit the characters. Animation-wise, it's what you would expect from an early 2000's show from Zexcs, that is, not great, but okay. The music too is not special, but the opening is surprisingly catchy for a somewhat silly and serious song that repeats "Aenai, ai, ai, ai" over and over again. Comparing the sub to the dub, this is an anime where I actually preferred the English dubbed over the subtitled. The script does a nice job adapting the cute names each sister has for Wataru, from "onii-chan", "tan", "san", etc., to "Big Bro", "Brother Dearest", "Brother Mine", and so on. The English dub also gets bonus points for giving some of the girls fitting, if not somewhat stereotypical, accents that were missing in the original Japanese cut. A song half-way through the series that could have easily been ruined, is given a great translation into English and stands out in it's own right as a good Christmas song. Overall, Sister Princess is not exactly a stand-out anime, but it is good enough to not be a waste of time, and I still re-watch every now and again when I've got nothing to do. I recommend giving a watch at least once, and if you enjoy it, I would recommend the sort-of sequel [Sister Princess RePure][1](actually, that is the only time I would recommend the sequel). [1]: http://www.hummingbird.ly/anime/sister-princess-repure

Start a new discussion for Sister Princess anime. Please be fair to others, for the full rules do refer to the Discussion Rules page.