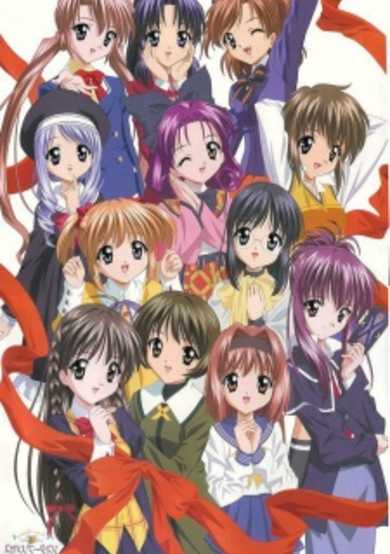 After a long time, Wataru has decided to leave his family home and live on his own. The girls have also decided to split up and most of them are living separately as well. But none of them have forgotten about their brother and still stick together to meet him. (Source: AniDB)

Secret of the Garden!

Anii and My Mug Cup

The Red Thread of Fate

Sister Princess RePure is strange in that it is a psuedo-sequel. It was released a year after the original Sister Princess, and was made by the same studio, ZEXCS. It is often purported as a direct continuation of Sister Princess as such, but this is not entirely true for several reasons. For one, RePure makes little to no mention to the events of the previous Sister Princess. Secondly, Wataru Minakami is no longer the main character, and many side characters from the previous serious either do not appear, or appear only as cameos(that's gotta sting). Finally, where as the previous series had an actual plot, this series is a collection of short vignettes each focusing on a different sister, and more closely following the light novels the entire series was based off. All that being said, while not being a direct sequel, this show would be better watched after viewing the previous series. Why didn't they just make a direct sequel? Who knows? Those that did not see Sister Princess, or did see but disliked, are better off skipping the show entirely as they will be bored to death. The show gives better insight into the twelve sisters; their memories and motives reasons for the immense adoration of their brother being the main focus of the show. The show has barely any comedy, a slow pace, and hardly any sense of conflict or drama. Each episode is split into two halves, the first a short story being the only source of anything in the show, and the second half a tale about one of the sisters. It is, for all intents and purposes, pure fanservice for fans of the original Sister Princess. If you loved the sisters and their cute quirks, then this show will quench your thirst for more of their antics. Otherwise, the show would serve as a good sleeping aid. If you did like the previous Sister Princess and the characters, then you will love this show. Not just for the stories either. The animation is markedly better than the previous series, the vignette on sleepy younger, French sister Aria being pretty avante' garde and a nice visual treat. The soundtrack too, is a major improvement. The new opening being miles ahead of the previous one, and a personal favorite of mine. Now, one thing that is also different, is the amount of incestual sub-text. The previous series had a bit of it, especially with sister Sakuya. However, this show is drenched in it. The incest is less of a \*wink\* \*wink\* \*nudge\* \*nudge\*, and more of a major driving force smashing you in the face like a railgun-fired hammer. Many of the sisters flat-out state they wish to marry their brother, and it is actually the main focus of quite a few vignettes. If incest is not your thing(I don't mind it), then you will probably want to skip this show even if you loved the first Sister Princess. All in all, the show is simultaneously an improvement, and worse in other ways, like any sequel really. Bottom line: if you like Sister Princess and don't mind incest, this show is worth watching, otherwise, you should<strike> go jump in a ditch</strike> , er, I mean, skip this show.

Start a new discussion for Sister Princess: Re Pure anime. Please be fair to others, for the full rules do refer to the Discussion Rules page.