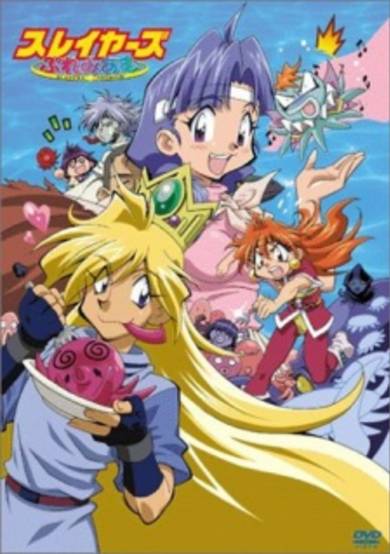 Lina and Gourry travel to a seaside town named Acassi, where octopus tentacle is a delicacy. However, the octopus meat carries a curse that dooms the eater to only speak Takogo (octopus language). Amelia, Zelgadiss, and Xelloss all show up, and the main four characters (Lina, Gourry, Ameria, Zelgadiss) get cursed. The octopi enlist the power of a mazoku to get rid of the humans once and for all. The white sorceress Ruma must learn the cure to the curse from her long-lost master in order to save the town. (Source: ANN)
User Count1443
Favorites Count6
Start Date22nd Dec 2001
Next ReleaseInvalid date
Popularity Rank4099
Rating Rank3590
Age RatingPG
Age Rating GuideTeens 13 or older
Subtypemovie
Statusfinished

Slayers Premium was a huge step back in quality from Slayers and Slayers Next, I’m obviously glad that it’s no longer than 32 minutes, but it was 32 minutes that were quite painful to go through… First, let me say that I watch Slayers in english dub (yes, yes, I know, I’m an heretic.) It’s one of the few series I prefer the dub over sub. And to my great disappointment Slayers Premium changed the voice actors… and that was terrible mistake. It’s dreadful, the Lina in Premium sucks, it doesn’t fit the character at all and even then most of the cast seems to be acting out of character for no apparent reason. The art is also stepped down, as well as the music. The story is uninspired and dull and, like I said, thank god it’s only 1 episode; because I would have dropped a season with that kind of prelude. So yeah, overall Slayers Premium is simply a bad OVA, but that happens all the time in anime doesn’t it..? It is not necessary to watch it to understand the rest of the series, skipping it would be recommended, unless you have time to kill. It also doesn’t bring any relevant backstory or anything like that, so it’s really just a basket of stale bread in between the main dishes.

Start a new discussion for Slayers Premium anime. Please be fair to others, for the full rules do refer to the Discussion Rules page.