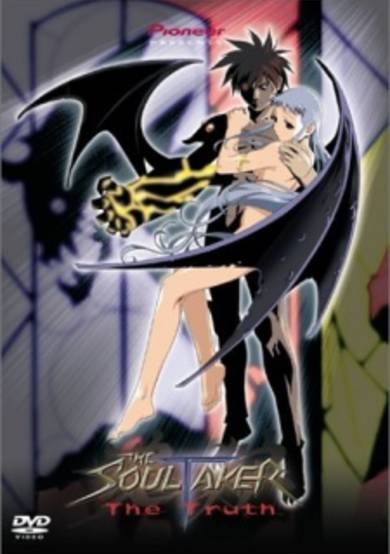 After the human colony on the moon was destroyed by disease, Kyousuke Date and his mother flee to Earth—separated from their family. They take refuge in a cathedral where his mother hides as a nun for reasons unknown to Kyousuke. After dangerous people find their sanctuary, his mother stabs him before she herself is murdered. Days later, Kyousuke finds himself alive and in the house of a mysterious girl who claims to be his twin Runa—and she is not the only one! Runa suffered a similar fate at the hands of her adoptive mother; however her soul was divided into several pieces making "flicker girls" who are being hunted by the evil Kirihara Group. The reason Kyousuke survived: his body's DNA conformed to the disease and he is able to transform into a fearsome alien mutant known as the SoulTaker. Kyousuke begins his battle against a hospital of evil mutants and dangerous corporate assassins in order to save himself and the sister he has never known.
User Count2329
Favorites Count6
Start Date4th Apr 2001
Next ReleaseInvalid date
Popularity Rank3248
Rating Rank8571
Age RatingPG
Age Rating GuideTeens 13 or older
SubtypeTV
Statusfinished

All The SoulTaker: Tamashii-gari released episodes

The Crest of the Devil

One day, a horrible thing happened. A mother killed his son named Kyosuke Date. Is this the end for him? Or is it the start of a new adventure?

The World is an Illusion

Kyosuke asks his new found friend Shiro why his mother killed him but he was not a big help. Meanwhile, Kirihara captures Maya so that they could run experiments on her. At the same time, Kyosuke dreams about Maya's struggles and sees an amusement park. He runs off and heads to the amusement park. Can Kyosuke save Maya? And what new enemies are awaiting his arrival in the amusement park?

The Skull and the Maiden

A girl is being chased by unknown people. Meanwhile, Kyosuke heads to the church to look at his mother's diary. At the church his eyes starts to bleed and the girl shows up claiming that she is his sister. Is this girl really his sister? Or is it a trap set by the Kirihara corporation?

A boarding house in the middle of the forest is the home for another flicker named Sayaka Tachibana. Outside the boarding house Kyosuke, with Shiro, observes the boarding house. Later, the houses nurses says that she will help them. Is this nurse really going to help them? Or is she a minion of Dr. Narugami?

Beyond the Human Realm

Kyosuke decides to infiltrate Kirihara's base so that he could save a Flicker named Kasumi. Meanwhile, Shiro heads to the core of the base with the intentions of destroying the Flicker Searcher. Kasumi and Kyosuke were attacked and were separated. Kyosuke goes into a room where a doctor was waiting for him. He transforms into SoulCrusher. Can Kyosuke defeat this new foe? And is Shiro successful in destroying the Flicker Searcher?

The battle against the SoulCrusher might be over but the danger for Kyosuke is still great. Now he is flying straight down to Earth and nothing can save him until he was teleported a floating fortress. There he meets a Flicker named Megumi who he starts to trust and actually like. Also in the ship is Zabo but he is in a state of suspended animation. Later, Megumi finally reveals her true form and expresses his anger towards Kyosuke. Can Kyosuke defeat her?

The Last of a Woman

On the riverside, Shiro, Komugi, and Kyosuke perform a riverside ritual were they put candles on boats in memory of dead love ones. But a mysterious woman appears that says that she is Kyosuke's birth mother. There she explains that Megumi is wrong about the things she said. Then a couple of Hospital mutants appear and Kyosuke was able to defeat them but Kyosuke got injured. He later wakes up with his mother and Richard Vincent is there for a visit.

Shiro reveals to Kyosuke that his sister, Yui, is the actual leader of the Kirahara group. Shiro says that her sister wants the Flickers so that she could find Runa. Also Shiro tells Kyosuke that he could have saved his mother but decided not to because only the mental trauma that he experience was the only thing that could awaken his mutant powers. Meanwhile, Nogumi is about to fight Yui's new monster she calls the SoulAnubis.

Phantom of a Beautiful Dead Woman

Kyosuke arrives to help Nogumi and when he did the SoulAnubis sees his cross and returns back to his human form. Kyosuke recognizes the face and it was Maya. Then Yui explains that she combined flickers to create this new beast including Shiro's girlfriend Suki. Meanwhile, Richard Vincent spots Nogumi and starts to heal her.

Runa's signal has been lost and a strange underwater entity has told Yui to cut off their ties with the aliens. Meanwhile, Kyosuke decides to his father Vincent but Komugi tries to talk him out of it. Will Kyosuke really fight his father?

Start a new discussion for The SoulTaker: Tamashii-gari anime. Please be fair to others, for the full rules do refer to the Discussion Rules page.