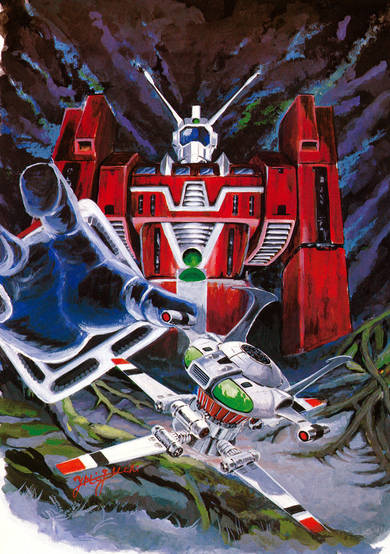 Mankind has traveled to the stars and come across various alien civilizations, now long dead. Upon discovering the archaeological remains of such a civilization on the planet Solo, humanity finally has its first encounter with a living alien species: the Buff Clan. When Karala Ajiba, the daughter of the Buff Clan's military leader, sets foot on the surface of Solo, the Buff Clan launches a brutal assault on the colony to retrieve her. In order to escape, Cosmo Yuki, Kasha Imhof, and Bes Jordan climb aboard three trucks, which soon transform into the giant humanoid robot Ideon. When the settlement on Solo is destroyed, the survivors board a recently discovered spaceship—the Solo Ship—and flee, endeavoring to get away from the aliens and finally find peace. The relentless Buff Clan, however, is still in hot pursuit and will not give up so easily. [Written by MAL Rewrite]

Humanoid aliens known as the Buff Clan discover the Earth colony planet Solo, where archeologists have found 3 large armored trucks from the 'Sixth Civilization' a long extinct alien civilization. Karala Ajiba, daughter of the Buff Clan military commander heads down to Solo along with her assistant Mayaya and is pursued by her colleagues Gije Zaral and Damido Pechi. A panicked Buff Clan soldier attacks one of the Solo excavation sites, triggering an interstellar war. Seeking cover, some of the colonists including Cosmo Yuki, Kasha Imhof, Bes Jordan and Sheryl Formosa board the armored trucks, which combine to form the god-like mecha, Ideon, which fights off the enemy.

The Ideon's 3 vessels revert to their normal forms after the battle is over and are equipped with powerful weapons under the direction of Bes. Bes later runs into Karala in the woods, mistaking her for a colonist. Gije leads an attack on Solo to rescue Karala, and totally destroys Solo's capital, New Lopia. Fleeing from the attack, a group of children including a baby, Piper Lou, board the Ideon, which finds the strength to fight off the Buff Clan once again. Sheryl meanwhile heads to the second excavation site, where a giant spaceship has been discovered.

Karala is reunited with Mayaya aboard the Solo Ship. Gije and Damido request help from their commander, Abadede, and launch yet another attack on Solo in order to rescue Karala. Bes discovers that Karala and Mayaya are actually Buff Clan aliens. During the ensuing battle with the Buff Clan, the Solo Ship rises from out of the ground.

Battle in the Sandstorm

Suprise Attack of the Bajin

Start a new discussion for Space Runaway Ideon anime. Please be fair to others, for the full rules do refer to the Discussion Rules page.