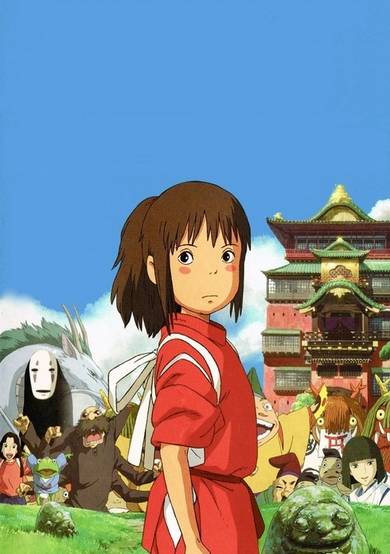 Stubborn, spoiled, and naïve, 10-year-old Chihiro Ogino is less than pleased when she and her parents discover an abandoned amusement park on the way to their new house. Cautiously venturing inside, she realizes that there is more to this place than meets the eye, as strange things begin to happen once dusk falls. Ghostly apparitions and food that turns her parents into pigs are just the start—Chihiro has unwittingly crossed over into the spirit world. Now trapped, she must summon the courage to live and work amongst spirits, with the help of the enigmatic Haku and the cast of unique characters she meets along the way. Vivid and intriguing, Sen to Chihiro no Kamikakushi tells the story of Chihiro's journey through an unfamiliar world as she strives to save her parents and return home. [Written by MAL Rewrite]
User Count206347
Favorites Count2682
Start Date20th Jul 2001
Next ReleaseInvalid date
Popularity Rank11
Rating Rank47
Age RatingG
Age Rating GuideAll Ages
Subtypemovie
Statusfinished

All Spirited Away released episodes

Story 10:+The story is one of the best of any anime movie I have ever seen. The diverse themes can make anybody love it. The ending was happy, yet left you with a sinking sad feeling.Art 9:+The animation is typical of Kyoto Animation. It was very good but not awesome. The characters are very well portrayed.Sound 9:+I watched the subs first then the dubs. The English dubs where of excelent quality. Otherwise sound was good.Charectrer 10:+Between all the the characters, you will have to love one of them. After watching I felt that I knew the characters as well as I know my friends.The contrast between the witch sisters significantly adds to the story.Enjoyment 10:+I really loved it. The plot keeps you watching with very few boring points.Overall 10:+I think that this is a true masterpiece, and all people who like anime should watch Spirited Away.

There isn't much left to say about *Spirited Away* that hasn't already been said a thousand times. Easily the crown jewel of Hayao Miyazaki's career, *Spirited Away* embodies everything good about the medium. Studio Ghibli knocks it out of the park in every way with this film, and it is their greatest production thus far. The story revolves around Chihiro, a young girl who is moving to a new town. She and her family accidentally run into a bit of a problem on the way to their new home, and Chihiro must be resourceful in order to save them all. Chihiro, modeled after Miyazaki's friend's daughter, is one of the most realistic girls you will ever find in an anime. She is simultaneously full of life and bratty (just like a real girl), and it is refreshing. Additionally, the fantastic characters she meets are all full of their own wonder, and I don't want to give too much away, but you've never quite seen anything like them. Animation is some of the best Studio Ghibli has ever done. There is a scene on a train that is quite possibly the best thing Studio Ghibli has ever done. Just do yourself a favor and watch the film. It is an absolute visual treat. The score by Joe Hisaishi is delightful. The Sixth Station is one of his most memorable tracks, and the rest of the score is quite lovely too. Overall, this film is widely revered as the best production of both Miyazaki and Studio Ghibli. If you haven't seen it, go watch it now. I don't know if I can think of a better way to spend two hours than with Chihiro, Haku, and the Spirit Bathhouse.

Spirited Away. If you haven't seen it already, you've probably already heard of it. Needless to say, Spirited Away is nothing short of perfect, and nothing less. Revered as one of Hayao Miyazaki's (many) masterpieces, it shows us clearly and skillfully why it should be regarded as such. Chihiro, a young girl who is thrown into a bizarre world, riddled with entities and apparitions, must save her parents who have been turned into pigs; by no means other than to remember them. Along this wonderful tale of an animation, she meets a young boy named Haku. Though given the state of hypnagogic turmoil she is in, everything is but rarely what it seems to be. Spirited Away in its entirety, is creative, considerate, impulsive, and above all else, beautiful -- and it does this ever so subtlety. It alludes to what we wish we could do, and what we could ever hope to dream of. It is creative in its art, considerate in its musing abstraction of the practicality in logic, impulsive in its endowment to draw us in with its detailed architecture, and beautiful in every aspect imaginable, though most notably the art and soundtrack. It should be duly noted that the art alone will be enough to draw one in. Fluidly and masterfully done, the natural artistic nature of this film amplifies, and even dares the cognitive reflexes of oneself. At times, you may find yourself gazing brazenly at the backdrops and forgetting about the story, for the sheer fact that it is nothing short of breathtaking. The pairing of an original yet premature love, an exquisite cast, a mesmerizing soundtrack, and not to mention its splendid artwork; Spirited Away does everything effortlessly and gracefully. Almost as if it was created to remind us that we, however we may be now, deep down inside, and wherever we may have locked that which was once a part of us -- we were once those imaginative and carefree children. Not bound by societal [labels and](#) shackled by the thought's of another individual, no, simply carefree. Spirited Away does all this much like breathing, effortless and thoughtless. If you haven't already seen Spirited Away, why not today?

This movie is one of the first anything of anime I had ever seen. It was breathtaking to watch. Amazing visuals. Great story. Watching this movie is when I remember my childhood most. I used to watch it all the time. Overall, it is a-w-e-s-o-m-e.

Great story. Fantastic characters. Awesome animation. Incredible sound. You will watch more times than you can count. What are you waiting for watch it now. Almost forgot, it has a freaking white dragon. 12/10

Lol everyone given 10/10 what should I say? It's perfect! Best anime movie I've ever seen, Good music, good characters, good, story and good animation! If you haven't watched it yet, do it now or you'll miss something!

One of the most beautiful stories I've seen. The whole thought behind the story is so amazingly original and out-of-the-box not to mention the animation is gorgeous.

Spirited Away In the making-of feature on the *Spirited Away* DVD, there is a scene in which Hayao Miyazaki (the film's writer and director) asks his animation team, "Have any of you ever had a dog?" The question concerns a particular scene in which the heroine, Chihiro, must pry open the maw of a wolf-headed dragon. To achieve a certain realism, the animators want to make it look like prying open a dog's mouth. But given their inexperience, it's off to a local vet to film themselves forcing open some canine jaws. While the idea of live research forcing open a dog's mouth may seem odd, this devotion to detail is apparent when watching *Spirited Away*. Subtle touches of realism are everywhere, such as Chihiro tapping her foot when putting on her shoe, or the way Chihiro's mother holds her arm when she eats. These minor details make *Spirited Away*, despite its fantasy setting, seem very much a part of the real world. For long-time animation fans, such devotion to the craft should come as little surprise given the pedigree set by Hayao Miyazaki and Studio Ghibli. The level of quality that fans have come to expect from Ghibli are met with *Spirited Away*—the film is gorgeous. Artwork is lavish and vibrant, featuring stunning depictions of the fantasy world in which Chihiro finds herself. The animation is life-like and fluid, with realistic nuances in character movements. And complimenting the wonderful visuals is the sweeping musical score by composer Jo Hisaishi. *Spirited Away* opens with Chihiro and her parents traveling to their new home. Chihiro resents the idea and expresses her disapproval in a quiet sulk. Along the way, her father mistakes an off-beaten road for a short cut, and they inadvertently wind up in what he thinks is an abandoned amusement park. A brief exploration reveals a restaurant's unattended buffet and Chihiro's parents succumb to the delicious offerings. While her parents gorge themselves on the food, Chihiro continues to explore and encounters a young man named Haku. Haku warns her to leave at once, but by this time it is too late. Chihiro discovers she is trapped in a vacation spot for the spirit world and that her parents have literally become pigs. With no one to turn to, she must learn how to survive in this strange land and, more importantly, how rescue her parents and return home. The story is primarily about Chihiro's personal growth and the life lessons she learns from her experiences in the spirit world. She manages to land work at a bathhouse run by a stern matriarch named Yubaba. As the newest member of the staff and shunned by the other workers, she is given the most grueling, demeaning jobs. But Chihiro responds in a fashion that is both admirable and believable, and even makes a few friends along the way. Miyazaki's envisioned world is filled with all sorts of beings, from the wondrous and mystical to the just plain strange. Some have distinctly animals characteristics, such as the frog caretakers of the bath house or the insect-like boiler-room operator, Kamagi. Others, like No-Face, a shapeless black being who wears a white mask, or the stink spirit, a mass of oozing brown goo, are more transcendent. And then there are whimsical creatures, like the delightful little soot balls and a walking lamp. The English dub is a treat, but with Disney's resources, anything less would have been disappointing. Casting is all-around excellent, highlighted by Daveigh Chase's spot-on performance as Chihiro. Memorable performances are also turned in by Suzanne Pleshette as Yubaba and Susan Egan as Lin. But for die-hard subtitle fans, the DVD release also sports the original Japanese track in full 5.1 surround sound. Disney seems to have learned from the fiasco resulting from their planned English-only release of *Princess Mononoke*. Having displaced *Titanic* as Japan's #1 all-time film, been the subject of near-universal praise by critics, and received numerous accolades (including a 2003 Academy Award for "Best Animated Film"), the consensus is in: *Spirited Away* is a wonderful film. And I can't say I disagree with that. **The Verdict**\: 9 1/2 (very good)

Start a new discussion for Spirited Away anime. Please be fair to others, for the full rules do refer to the Discussion Rules page.