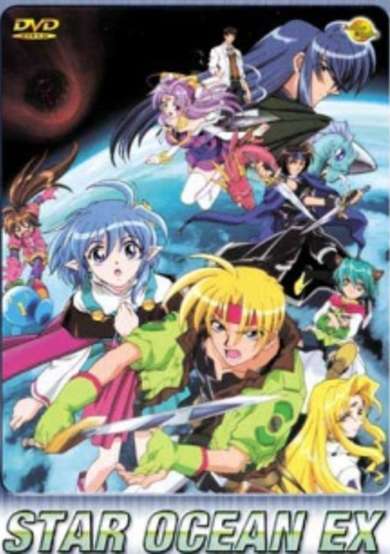 Claude C. Kenni, a crewmember on the spaceship Calnus and son of the commander of the ship, is transported to Expel, a backwards planet with swords and magic. He teams up with Rena Lanford, who thinks he is the legendary Warrior of Light, and other characters to investigate the Sorcery Globe, a meteorite that has been causing problems all over the world. (Source: ANN) After an asteroid crashes onto the planet of Expel, strange things begin to happen. Natural disasters happen with greater frequency and monsters begin to appear. A legend states that a warrior will come to save their planet with a sword of light. Far away, on the planet of Milocinia, the small party from the space ship Calnus, under command of Ronixis J. Kenni, investigates a large black globe that has been the cause of some disturbances. While doing so, Claude C. Kenni, son of Ronixis, is pulled into some type of device and sent to Expel, where he meets Rena Lanford, saving her from being attacked. She mistakes the weapon he uses, a phase pistol, for the sword of light and believes that Claude is the warrior that will save them. 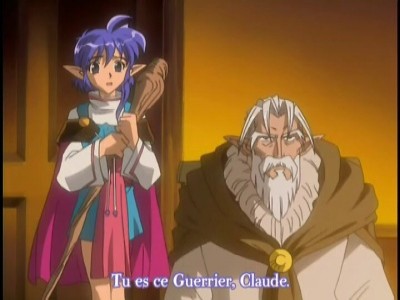 After saving her life, Rena takes Claude to her village, Arlia, where she has him wait at the church for her to get the town elder. As he waits, he sees that the church's stained gass windows tell the story of the warrior of light. Rena comes to get Claude soon and takes him back to her house. He has dinner then Rena shows him to his room. As they sit on his bed, it begins to rain and she begins to stare at him and mutters that she "has been waiting all this time". Embarrased, Rena leaves and Claude decides to take a nap. Claude dreams that his father comes to save him, but refuses to help. He tells Claude that the only one that can save him now is himself. Claude wakes to find someone in his room. This person attacks, but Claude just dodges. Rena tells the man to stop. It is the town elder, Regis, that has attacked Claude, but he tells Claude that he had to be sure that Rena was right about Claude being the Warrior of Light, and now he is. Regis tells Claude more about the disasters that have ben happening on Expel and about what his mission is. Claude, however, insists that he is not the Warrior of Light. He just wants to go home. Not being able to change Claude's mind, the elder tells Claude that he can stay at his house for the night then should go to Salva, a town to the north, where he can find more information. The elder also gives Claude a sword with which he can protect himself. The next day in Salva Claude saves a girl named Yuki from several thugs. She tells him that they work for the mayor's son, Alen, who is childhood crush of Rena. Alen came through earlier saying that he and Rena would be married that day. Claude runs back to Arlia, but on the way meets Alen, who has kidnapped Rena and is taking her back to his mansion in Salva. Rena's crecent moon hairpiece falls off near Claude and he takes it and goes to save Rena. Claude arrives at Alen's house, but finds that the front door is locked. Yuki appears from behind the house and shows his another way in. In the house, Alen explains to a tied up Rena that he is not the same man he was before. He holds out his and a purple stone appears, floating just above his palm. Alen has been reborn through the power of the stone. Alen begins the ceremony, but Claude enters then and tells him to stop. Alen explains that he and Rena have loved each other since childhood; but when he asks, Rena won't look at him. He turns her head, but all he sees in her eyes is pitty. When Rena begins to cry, Alen is shocked and steps back. In his anger, Alen turns into a monster. Claude and Yuki rush to Rena and free her. As they get ready to leave, Alen blocks their path. Claude prepares to use his pistol, but Rena tells him not to, causing a moment of cunfusion in which Alen hits Claude, hurting him and damaging the gun. Rena remembers what Alen said about the stone and tells Claude that if he can destroy it, maybe they can free Alen from its power. Rena pleads with Alen and causes him to let his guard down for a moment, in which Claude slips by and uses his sword to destroy the stone. Back in Arlia, they meet with the elder and explain what happened. They come to the conclusion that the stone must have had something to do with the Sorcery Globe. Claude is more determined now than ever to get to the Sorcery Globe. As Claude walks with the elder back to his house, the elder explains that Rena is actually not Westa's daughter. In fact, nobody really knows anything about Rena. The only clue is the pendant she wears, which she was wearing when she waas found. The elder wants Claude to take Rena with him when he leaves. But, Claude is not so sure. That night, as Claude thinks about things, Rena shows up and asks Claude to take her. He afixes Rena's hairpiece back on her and tells her that it will be too dangerous and she cannot come. The next day as Claude is about to leave, Rena comes up to him. He tells her it will be a hard journey, if she can live with that. Then Alen shows up and offers to take them to Cross. And so they begin their journey to the Sorcery Globe. 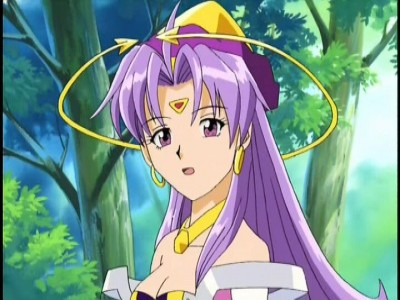 The Master of Heraldic Magic

Rena and Claude decide to visit the king in Cross, who tells them that the battles with the monsters on the continent of El, where the Sorcery Globe landed, are still going on. After making sure they will not change their mind, the king gives them a passport to go. Back outside, they meet Celine Jules as she is being attacked, though she does more damage to the attackers than they to her. But, because of him stepping in, Celine makes Claude her bodyguard. Celine tells them that she is a treasure hunter and is searching for the treasure of Cross Cave and eventually talks them into making a detour to the cave while on their way to El; although the cave is in the wrong direction. After searching the cave and getting lost, thanks to a false map that Celine had, they stumble onto a chamber with the treasure. It turns out to be an old book written in a language that they do not know. After coming back out of the cave, Celine tells them that she is going with them. Rena, Claude, and Celine discover a sign pointing them in the direction of a town called Mars. Celnie tells them that this town is a town of Heraldic sorcerers like her. Then Celine notices a bog crawling on her hand and runs away. That is when Claude and Rena hear someone scream. They go see what the trouble is and find some bandits trying to steal a stagecoach full of children. While saving the children and their teacher, Rena and Claude meet an old friend of Rena's named Dias. Rena and Dias grew up in Arlia before he left and became a great swordsman. After making their way to the town of Mars, the town elder and the teacher thank them for saving the children. They tell Claude, Rena, and Dias that the bandits wanted to capture the children and use them as hostages to get the Book of Seals, which is a book filled with Heraldic secrets and is never permitted to leave the town. They ask Claude and Dias to help them protect the town. Claude accepts, as does Dias. Dias, however, tells them that he will be enough then leaves. Rena follows and tells Dias that she thinks Claude is the Warrior of Light and that they are going to El to see the Sorcery Globe. She asks Dias to help Claude. The next day, Claude finds Dias in the forrest and goes to apoligize, but Dias attacks him using only his left hand, pointing out his weeknesses. After beating Claude senseless, he talls Claude that he's too weak to protect Rena. Claude gets up and attachks Dias this time, forcing Dias to use his right hand. This makes Dias mad and he uses Kuuhazan to defeat Claude. After getting Claude back to his room in Mars, Rena uses her powers to heal Claude. It's not long after that the town is attacked. Dias is lured away by some of the bandits, but is forced to face another enemy. While he fights and defeats them, the town elder tells the people there that this is the time to move the book to a safer location. But, Celine and Rena reveal that the real elder was attacked and this man is an imposter. Rena used her healing ability to help the real elder. The fake elder reveals himself to be a shape-shifting serpent. Claude and Rena hold him off while Celine and everyone else leaves. After a little fight Claude uses Kuuhazan himself to defeat the serpent. As Claude turns to leave, though, it jumps back up to attack him, but Dias uses his Kuuhazan, which is more powerful than Claude's, and kills it. Claude and Rena spend some time alone to talk, but Celine soon joins them and they continue on their journey. Because of the dragons attached to Ashton's back, Ashton decides to join Claude's gang in search of the Tears of the King to remove the dragon, Gyoro and Ururun behind his back. 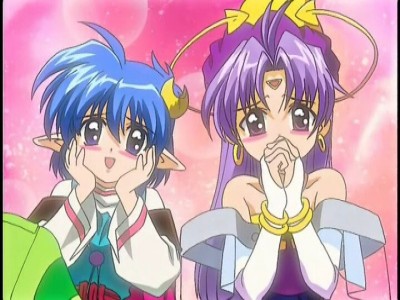 The gang decides to put a hold on finding the Tears of the King and help a beautiful woman named Opera to look for her long-lost boyfriend in the Mountain Palace. 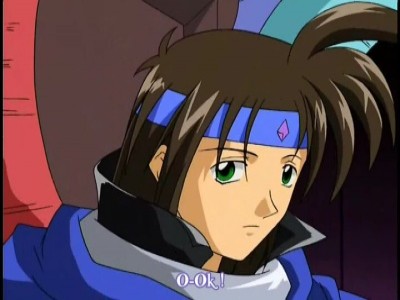 After finding out that the Tears of the King will kill Gyoro and Ururun, Ashton must decide whether to get riid of them and return to normal or stay it that way for the rest of his live. 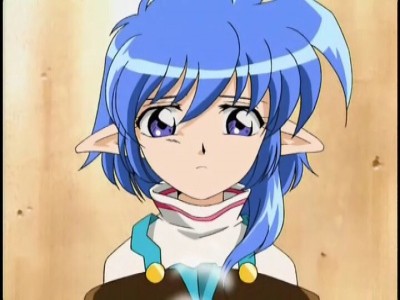 The gang reaches Harley Town where Ashton and Rena have their own mini adventure in this town. 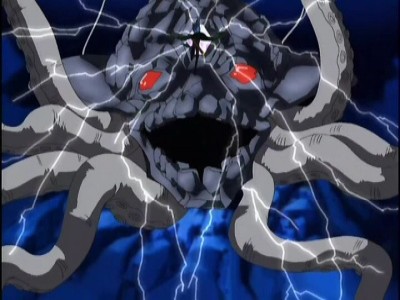 After Claude encounter a maiden ghost and a pirate who dresses up in seaweeds, the gang decides to solve both mysteries to bring back peace to Herlie Town.

Start a new discussion for Star Ocean EX anime. Please be fair to others, for the full rules do refer to the Discussion Rules page.