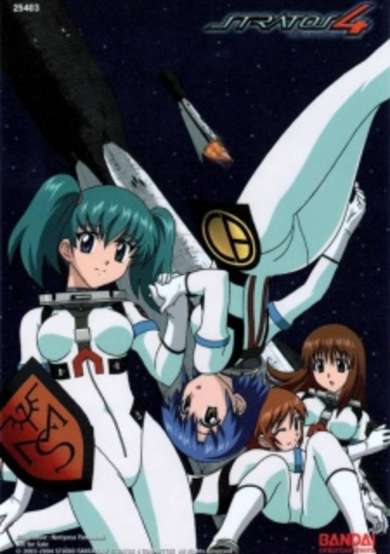 The Earth has developed a defense system against large meteorites that are on a collision course with it. This protection system is made up of the Comet Blasters based in several space stations as the 1st line of defense, using nuclear warheads launched by spaceships. The 2nd line of defense consists of the Meteor Sweepers launching from ground airbases using hypersonic planes with special missiles to deal with the resulting debris from the blasts. Mikaze is a troubled girl that is a trainee pilot for a Meteor Sweeper team that dreams of becoming a prestigious Comet Blaster pilot. Stratos 4 revolves around Mikaze's and her teammates' challenges to become real pilots, while the Earth faces the threats that come from space. (Source: ANN, edited by Falre)
User Count982
Favorites Count5
Start Date5th Jan 2003
Next ReleaseInvalid date
Popularity Rank4836
Rating Rank6061
Age RatingPG
Age Rating GuideTeens 13 or older
SubtypeTV
Statusfinished

Mikaze Honjou dreams to become a Comet Blaster pilot but due to certain circumstances she lacks the motivation to fulfill her dreams. Meanwhile, the comet Katherine is on a collision course to Earth so the Comet Blasters are sent to intercept the comet. Also, ground forces are also preparing to sweep fragments that might result to the comet’s destruction.

Mikaze is still feeling depressed and it is starting to affect her school performance and the people around her. Meanwhile, the Comet Blaster team is sent to destroy the comet Lucy. Their attempt was a failure since four fragments was still on a collision course to Earth. It is now Mikaze’s turn to destroy the fragments. Will she be able to do it at her current emotional state?

Mikaze Honjyo has discovered the goal of going to space and begins physical training, lectures and flight simulators.

The comet being intercepted has suddenly changed orbit!

Mikaze Honjyo is being questioned by a committee and is placed under strict surveillance.

Alice "Admiral" Mikuriya, a cat, sneaks on to the base.

The Stratos Zero, a huge aircraft on the base, has been abandoned without being completed. Mikaze Honjyo has decided to help rebuild the Stratos Zero with Sako Kohichiro.

Once a year, a festival is held on the base and the families of the girls come visit.

The girls go to a hot springs when Kazuma enters the same bathing area and tells the girls an important story.

As Mikaze's exam date is drawing near, communications from the base to the orbital station have been disrupted.

Start a new discussion for Stratos 4 anime. Please be fair to others, for the full rules do refer to the Discussion Rules page.