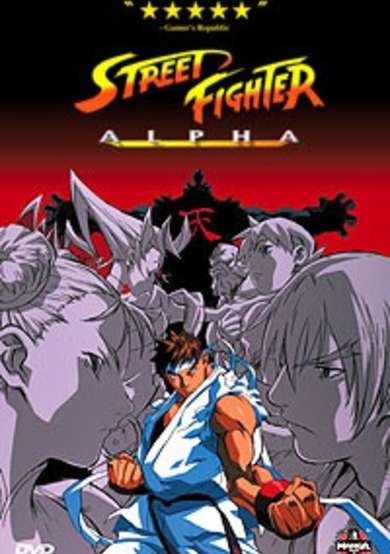 Ryu, the current Street Fighter champion, must overcome the power of the "Dark Hadou" which consumed Akuma, the brother of his sensei, Gouken. Plus, he deals with the unexpected arrival of Shun, a young boy who proclaims to be his long-lost brother. (Source: ANN)
User Count1186
Favorites Count3
Start Date22nd Dec 1999
Next ReleaseInvalid date
Popularity Rank4458
Rating Rank7780
Age RatingPG
Age Rating GuideTeens 13 or older
Subtypemovie
Statusfinished

"Street Fighter Alpha: The Animation" came a lot later than "Street Fighter II: The Movie", and it's not a patch on it. (Just to confirm: I'm talking about the animated movie, not that goddam awful live action one starring Jean-Claude Van Damme and Kylie Minogue...) The visuals aren't as good, nor is the production, nor anything else for that matter. The action is not that great - half the time it's hard to tell what's going on, and the other half of the time they're charging up fireballs. In fact they spend so much time charging up fireballs that that the anime feels hollow and seriously lacking in substance. There is one thing that's good about the fighting though - the bone crunching blows has a sickening, brutal quality to it when they land, helped along by a dark and twisted atmosphere that's prevalent within the anime. In fact that heavy atmosphere is probably the one thing about the movie that stood out for me.Content wise, Ryu's struggle with the dark hadou is mildly interesting, as is his brother appearing. These concepts might have been put to better use if the anime wasn't too busy dragging its feet and doing, well, doing nothing really. When the characters aren't wasting time charging fireballs, the anime generally takes on an air of contemplation. But what are they contemplating? Well, turns out this is yet another one of those crappy fighting anime which spend the length of the show asking that "all important question": why do we fight. By the end of it, they come to the laughable conclusion: to find the answer!!! Or something stupid along those lines. Wow that was worth the wait. Such talent is surely wasted in street fighting - these guys should have become philosophers instead!Ultimately, "Street Fighter Alpha: The Animation" feels sluggish and forgettable. Though it's not quite as worthless as some of the other fighting game to anime conversions floating about ("Fatal Fury" and especially "Tekken" jumps to mind), it's quite a way away from hitting the standards set by "Street Fighter II: The Movie" (the animated one, not that goddam awful live action one staring Jean-Claude Van Damme and Kylie Minogue).

Start a new discussion for Street Fighter Zero The Animation anime. Please be fair to others, for the full rules do refer to the Discussion Rules page.