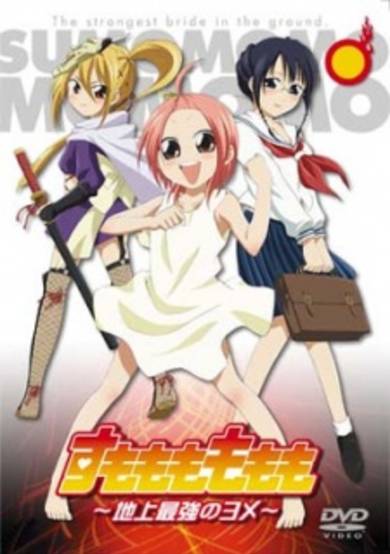 Koushi Inuzuka is a smart high school student who aims to become a public prosecutor. Unfortunately for our good guy, he was born into a martial arts family whose head (ie his father) only knows one language: violence. When Koushi was still a baby, his father made a pact with his biggest rival to marry Koushi to his opponent-turned-friend's daughter. The union of the two blood lines is supposed to bring forth Earth's strongest martial arts clan. Skip forward: Koushi is in high school, oblivious to the marriage arranged for him at his birth. Enter Momoko Kuzuryuu: sugar bomb, airhead, loli martial arts artist and Koushi's self-proclaimed bride (the strongest on Earth, no less). Her wish for sexual intercourse meets with Koushi's square refusal as he has absolutely no desire to get it on with someone who looks like she could be his little sister, not to mention that he doesn't have the foggiest idea who she actually is. Meanwhile, a war has broken out between the martial arts families. For Koushi, this means that numerous fighters are out to challenge/assassinate him. As if that weren't bad enough, our protagonist also has a fight phobia due to a traumatic incident that took place in his childhood. Now it's up to Momoko and her superhuman fighting skills to protect her "husband." Will the two sweethearts survive the trials and tribulations ahead of them? More importantly, will Momoko get her way receiving a baby from Koushi? (Source: Kotonoha)
User Count3854
Favorites Count9
Start Date6th Oct 2006
Next ReleaseInvalid date
Popularity Rank2407
Rating Rank5428
Age RatingPG
Age Rating GuideTeens 13 or older
SubtypeTV
Statusfinished

The Strongest Fiancee on Earth

Momoko, a strange girl skilled in the martial arts, locates Kōshi Inuzuka and wants to marry him in order to produce a strong child.

Momoko joins Kōshi's class, much to his surprise. The gym leader, jealous of Kōshi's popularity with a lot of the female students, challenges Momoko to athletic contests with Kōshi's credit in the class on the line.

Caught at the Zoo

Kōshi and Momoko go to the zoo together, though before long, animals escape their cages and a massive polar bear attacks them. All of this is a plot by Iroha to kill Kōshi.

Humanity and Justice Is Not an Assassination Plan

Iroha tries repeatedly to assassinate Kōshi, but upon developing a crush on him, she is unable to go through with it.

Iroha tries once again to kill Kōshi but gets caught up in the moment when Kōshi and Momoko are showing her around the park. Eventually, Hanzō has to step in to try to complete the mission.

Assassination of the Tiger, Reality!

Tenka Koganei of the Tiger family comes to assassinate Kōshi, but ends up in a fight to the death for Momoko's affection.

Bonds that Cannot Be Seen

After learning about the meaning between their marriage from his father, Kōshi starts to act nicer towards Momoko though soon worries about being manipulated and distances himself from her. Eventually, Kōshi realizes how much he has hurt her and tries to rectify for his actions.

The Kouhai that Calls the Storm

Iroha and Hanzō join Kōshi's school and instantly Iroha notices how friendly he and Sanae are to each other. Iroha proceeds to help Momoko convey her feelings more strongly to Kōshi.

Sanae, as a member of the horse family of the Zodiac Masters, is bound to protect Kōshi from danger without revealing herself to anyone. She is constantly battling the feelings she has for him.

Sanae's fiancé tries to prove to her through various strength tests to show her that he is worthy of becoming her husband. Meanwhile, Sanae is having enough trouble just keeping her martial arts background a secret from Kōshi.

Start a new discussion for Sumomomo Momomo: Chijou Saikyou no Yome anime. Please be fair to others, for the full rules do refer to the Discussion Rules page.