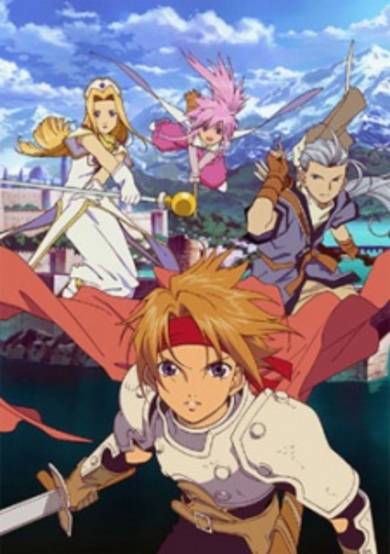 Tales of Phantasia The Animation

Tragedy strikes the lives of Cless Alvein, a young swordsman, and Chester Barklight, a young archer, as they return to their village of Totus to find it razed to the ground by the mysterious Black Knight. To take over the world, the Black Knight seeks to claim the power of the Demon King, Dhaos—sealed away by the ancestors of Cless and a young cleric named Mint Adnade. Dhaos's reawakening signals not only the end of the Black Knight, but potentially the world. Cless and Mint must now journey a century into the past to rally allies capable of vanquishing the Demon King for once and for all.Tales of Phantasia The Animation follows Cless and Mint's journey through time to long ago, where they forge an alliance with the half-elf sorceress Arche Klaine and the summoner Klarth F. Lester. Together, they strive to defeat Dhaos and his army in saving the past as well as the years to come.
User Count1896
Favorites Count5
Start Date25th Nov 2004
Next ReleaseInvalid date
Popularity Rank3603
Rating Rank5535
Age RatingPG
Age Rating GuideTeens 13 or older
SubtypeOVA
Statusfinished

All Tales of Phantasia The Animation released episodes

Mars Udole and his army of knights are attempting harness the power of two stolen pendants and awaken the Evil King Dhaos. Cress Albane, Mint Adenade, Chester Burklight and Trinicus are trying to stop them however but find themselves overpowered.

The war has ended following the destruction of the MysTek Cannon and Dhaos has disappeared into the future. Unfortunately, the cannon's explosion has destroyed a huge chunk of the city of Midgard and quite a number of people have lost their homes.

Cress, Mint, Claus and Arche fight relentlessly against Dhaos in the hopes of finally defeating him and saving Chester. Unfortunately, his defenses prove too strong for them and he is able to block all of their attacks with relative ease. The heroes keep on fighting though, and Cress pounds away at the Evil King's protective barrier while Claus and Arche give him a helping hand using magic.

The episode starts at the Alavanista Kingdom were Lundgrom reports to his superiors of the heroes status and they plan to attack Dhaos directly and confront within his own castle. All they could do was wait and hope the heroes are successful for an army of monsters lead by a dragon waiting and watching the kingdom.

Start a new discussion for Tales of Phantasia The Animation anime. Please be fair to others, for the full rules do refer to the Discussion Rules page.