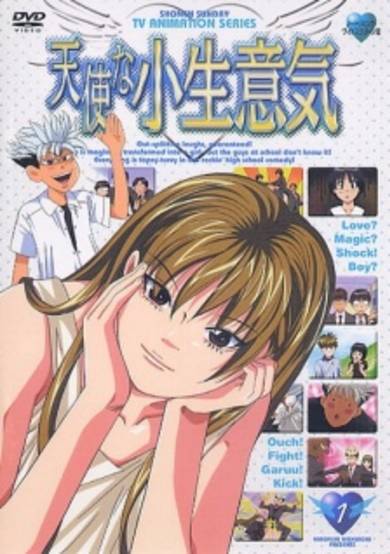 Megumi-chan is a girl with a secret past. She used to be a boy until she met a person she thought was a magic user. This person gave him/her a magical book from which a genie appears to grant one wish when blood is applied to it. Megumi made the wish to be a man in a man's body but the genie has a twist: he grants wishes backwards so he turns Megumi-kun aged 9 to Megumi-chan. Years pass and Megumi enters High School where she immediately beats up the school bully who of course falls in love with her. She is looking for that book again to be able to reverse the spell placed upon her. (Source: ANN)
User Count1920
Favorites Count14
Start Date6th Apr 2002
Next ReleaseInvalid date
Popularity Rank3583
Rating Rank2811
Age RatingPG
Age Rating GuideTeens 13 or older
SubtypeTV
Statusfinished Meeting at Full Speed. Is the Angel Male or Female?

This is the Man's Hand that Defeats All With a Single Blow!

The Angel Dances Down from the Sky...

Let's Try to Get Closer to Her Secret!

I Will Become a Woman!!?

A Magical Book! I Don't Want Megumi to Be a Guy!

Smash it! The Little Demon's Curse!!

Cheeky Angel. The name doesn't lie. The story, at first glance, is a "gender-bender" comedy, but oh dear, were we all wrong! Despite all the comedy, it manages to tell a pretty good and unique story that you won't see again without it being copied. What's the story?  It follows the fifteen year old Megumi. She has a secret: she used to be a guy. One day, she found this magician being beaten up by these guys and when he/she saved him, he gave her a magic book. Blood spills on it accidentally, making a trickster genie come out. Megumi wishes to be a man amongst men, but instead, he turns her into a beautiful girl! Frustrated, he/she throws the book in the ocean and now it's his/her goal to find that book to become a man again.  You'll probably not be shocked by the plot twist I won't spoil, but this story is more of a gender issue story than it is a gender-bender. By the way, it IS a school story, too, there's this whole group of guys who form a club to protect her, which is pretty ridiculous. Getting past the comedy, which on its own is pretty nice, the story is very interesting. It's not really the perverted with this, either. It never really crosses any lines because it's not an ecchi. There's no fanservice at all.  The animation is actually pretty bad. Remember, this anime is a 2002 anime. The art isn't very good, either, though. I can think why, well, the artist who drew the manga hadn't really done much before this series to my research. It must have been hard to transition this into anime. ...Wait, no, something else popular came out before this. It's just the art style. The sound is fine. The OP is awesome, though! The first one, anyway. The characters? Ah, what fun. This was when tsunderes became common. I love Genzo and his determination for Megumi. It's really cute. All the guys are really dense and stupid, and that makes them fun to watch when they try to all "help" Megumi in various things. Megumi herself is pretty cool. Even Miki is awesome. I have no complaints for the characters. I loved this anime. It doesn't follow the manga 100%, but it's a classic worth looking into. I recommend it. Give it a go. It's pretty long. This is back when anime was really long, though, but it won't be a waste of your time! 89 out of 100.

The amount of fillers and pointless episodes is insane in this anime, but if you want to enjoy it watch the first 10 episodes and then skip to episode 45........... trust me, it will make a huge difference.

Start a new discussion for Tenshi na Konamaiki anime. Please be fair to others, for the full rules do refer to the Discussion Rules page.