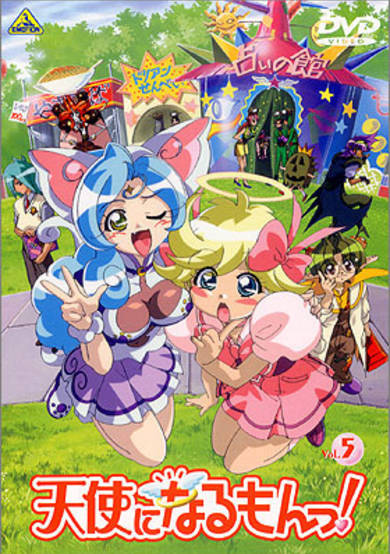 Yuusuke was just a normal kid going to high school. Then one day, the cute and behaloed Noelle fell, quite literally, into his life, naked as a baby and every bit as innocent. Before he can even fathom what's just happened, Yuusuke is inducted into a rather odd family of otherworldly beings. Papa is a Frankenstein monster with a taste for calisthenics. Mama is a gorgeous lady with a penchant for "round objects" -- really! The eldest sister, Sara, is literally invisible; the brother, Gabriel, is a teenage vampire with an attitude problem; and the youngest sister, Ruka, loves inventing things. There's a disapproving Grandma, who's a witch to the nth degree, and her vulture familiar. All Yuusuke wanted was for the beautiful Natsumi to even notice his attention, but now he has an angel-in-training to follow him wherever he goes. And Noelle, too, has a guide on her path to being an angel, the mysterious Michael. (Source: AnimeNfo)

Yuusuke's father has moved abroad, and now Yuusuke has the house to himself. However, on his way to school, he stumbles upon (actually, falls on top of) a naked, sleeping girl in the forest, with a halo over her head. He runs away when she wakes up and declares that he's her husband, but he can't escape her - she's the new student in his class! Noelle follows Yuusuke home, and he discovers that her family of demons from the underworld have moved in - and redecorated.

Patched Up Love Is Okay with Me!

Yuusuke is in love with his classmate Natsumi, who's on the diving team. She's a bit standoffish and doesn't take to him, especially after a couple of accidental incidents convince her that he's a pervert. He tells Natsumi that she's like an angel to him, but she rebuffs him. Noelle overhears this conversation and decides she's going to become an angel for Yuusuke. Meanwhile, Papa is trying to find a job and ends up promoting a wrestling champion named Delicious White. The family finds out that Deli-chan is actually working for a demon named Dispell, who has an unhealthy obsession with Noelle. Deli-chan kidnaps Noelle, and Yuusuke and the family have to rescue her.

Hug Me, Squeeze Me

Dispell, the villain, doesn't want Noelle to become an angel. To him, beauty lies in imperfection, and a haloed angel with no wings is beautiful and imperfect. He sends another demon, the cat-girl Miruru, to make sure Noelle doesn't succeed in becoming an angel, while his companion Silky sits passively by and echoes his lunatic ravings. Miruru obliges, though she'd much rather chase after Gabriel, Noelle's vampire older brother who has a terrible allergy to cats.

Yuusuke has developed a cold, and Noelle wants to make him feel better. Although she'd rather stay by him, he convinces her to go to school, where his friends Masaru and Saiki remark that he's lucky to have someone who thinks he's precious. Noelle doesn't know what the word "precious" means and tries to find out in class. Her teacher tells her that when you think someone is precious, it means you want them to find happiness. Miruru catches Noelle after school and tries to persuade her to go to a fancy restaurant with her, promising it will bring her true happiness. Noelle becomes extremely happy when she samples the dessert, Jasmine Jelly (it's pururun!), and decides to take it home to Yuusuke right away. Once she leaves the restaurant uproots itself and chases after her, trying to capture her to give her to Dispell. The restaurant is distracted by a giant cake and leaves Noelle alone - though it managed to smash her Jasmine Jelly before she could get it to Yuusuke.

Not There, But Still There

Noelle's oldest sister, Sara, is invisible. At first she enjoyed being invisible, because people left her alone, but now she can't make herself visible again and feels alienated. While the rest of the family plays a mean game of beach volleyball, Sara meets Yuusuke at the beach, wrapped in bandages. She said he was the first person who's paid attention to her in a long time, and she could make herself visible in front of him. The two of them are interrupted when a UFO kidnaps Noelle. Yuusuke runs to save her, and Sara has to get help from the rest of the family - if she can get their attention, that is.

Hearts Have Wings and Stuff

Because she wants to be Yuusuke's angel, Noelle starts her flying attempts, with the help of mechanical wings built by her sister Lucca. We see through flashback Natsumi's traumatizing memory of losing her older brother, Fuyuki. She's bitter about his death and is very annoyed with Noelle for endlessly talking about angels, but still Noelle follows her around and demands that Natsumi teach her how to fly. She goes to the diving team with Natsumi and attempts to dive off the high diving board the way Natsumi does. After all, Yuusuke said Natsumi was an angel, and every morning he watches her "fly" off the diving board.

A package arrives for Yuusuke --it's a squid! With a halo over her head! The family decides how they're going to cook her, until the squid announces they can't do that -- she's Noelle! After all, Noelle's family is not blood related, so what difference does it make if another Noelle moves in with them? She commences usurping Noelle's seat at the dinner table, Noelle's rice bowl, and Noelle's bedroom. To keep the family together Papa goes out and buys squid Noelle her own rice bowl. She's so touched that she confesses to Papa that she's not Noelle at all, much to Miruru's chagrin. Miruru asked her to disrupt the family and get rid of Noelle, presumably to drive her to Dispell.

I Wanna See You, But It Hurts

In the first episode, Noelle and her family had to battle a giant rice-cooking Daruma, sent by Dispell, using a mecha built by Lucca. Now Lucca has updated the mecha and Noelle is the designated pilot. Meanwhile, Miruru convinces the Daruma's wife (with baby in tow) to wreak vengeance upon the family for taking her husband away. The Daruma's wife proceeds to attack Noelle, who refuses to fight back - she understands that it's painful to be separated from the one you love. Sara suggests they bring the Daruma back to life, so that there will be no reason for revenge anymore.

No Doesn't Always Mean No

Granny doesn't want Noelle to marry an "impure human" so she goes off in a huff when the family starts discussing marriage plans (ignoring Yuusuke's objections). Miruru and Granny team up to try and get Yuusuke out of the picture (Miruru telling Granny that she loves Yuusuke and wants him for herself). So the newest robot has a ukulele that can turn people into frogs. Slowly each family member is turned into a cute little frog until Yuusuke is the only one left (Miruru betrayed Granny so even she is a frog) and has to figure out how to save everyone. He thinks you have to look into the ukulele's eyes but it's the strings that hold the magic.

The Thing at the End of the Tunnel

Natsumi has a fight with Kai. Yuusuke and Noelle go to a festival and Noelle receives a little creature called Bunbun ("Boonboon"), who supposedly will turn into a angel with 7 color wings if it's taken care of properly. Yuusuke has a bad feeling about the little guy though since it refuses to let Noelle sleep in Yuusuke's room and she even left for school without him the next morning. When it goes cray and eats all the food at the table when Noelle runs off to get some napkins, Yuusuke is convinces Bunbun is bas news, but Noelle refuses to believe him. When Yuusuke yells at her to get rid of it, Noelle seems like she's about to say "I hate you!" but instead says "I still love you!" so Miruru pops out, disappointed that her plan to break up Yuusuke and Noelle didn't work. Bunbun then goes berserk and drills holes into the walls of the house, making the whole thing look like Swiss cheese. Bunbun goes after Noelle and Yuusuke saves her. Lucca then fixes the old Bunbun into a proper, non-evil, creature and Noelle celebrates.

Start a new discussion for Tenshi ni Narumon! anime. Please be fair to others, for the full rules do refer to the Discussion Rules page.