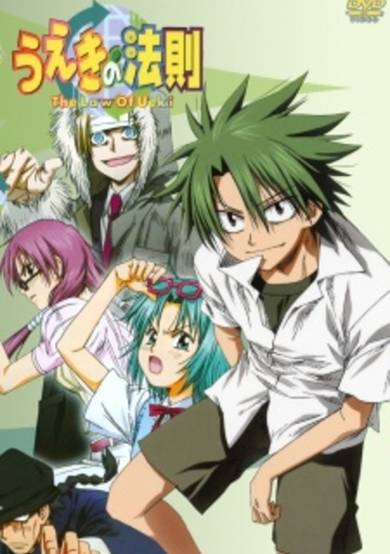 The Law of Ueki

Kousuke Ueki, a student of the Hinokuni Junior High School, is picked by a Celestial King Candidate, Koba-sen, to participate in a competition where people battle out to become the Celestial King and only the strongest will prevail. Embodied with the ability to turn garbage into trees, Kousuke will be joining in the battle against other junior high school students in this selection. This sets the premise for the earth-friendly battle where the students will pit their powers against the rest, with a reward of the Blank Talent giving motive for students to win. (Source: ANN)
User Count8014
Favorites Count65
Start Date4th Apr 2005
Next ReleaseInvalid date
Popularity Rank1424
Rating Rank2053
Age RatingPG
Age Rating GuideTeens 13 or older
SubtypeTV
Statusfinished

All The Law of Ueki released episodes 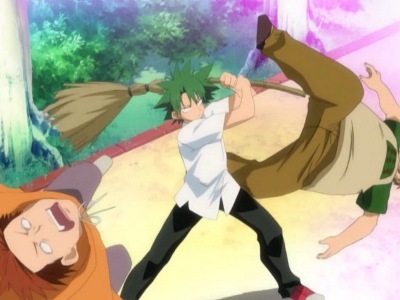 Kosuke Ueki has been given the power to change trash into trees for the battle to decide who would be the next King of the Celesial World. But if Ueki were to attack non-power users with his trees, then he will be punished by losing one of his talents. If all of Ueki's talents are gone, he will vanish.

The Law of the Battle Commencement!

Mori has decided to help Ueki, but she’s starting to see threats in every direction. When any middle school student could be a gifted, who knows when Ueki will be challenged. Two gifted do cross their paths. One is Seiichiro Sano, a decent type who they met while trying to rescue a small girl from a big fall. Another is Maruo Taira, a less than decent individual who has no problem attacking from behind. With the ability to turn water in his mouth to fire (and a little help from his God Candidate), how will Ueki fair in his first official gifted fight?

The Law of Talent

Thanks to Seiichiro Sano, Ueki defeats Taira. As Sano leaves, he talks about the Talent of Blank...Afterwards, Ueki and his school's running team practice with another school's running team. However, Ueki is soon lured into a trap by Adachi, who can turn cotton into stakes.

The Law of Li Ho, the Man of Physical Skills!

Mori is determined to learn more about this tournament so when the opportunity arrives to gain such information from Mr. K, she leaps at the chance. During their talks they are interrupted by another gifted. Unlike Ueki’s previous opponents, though, this one is different. Li Ho prefers to use his own body to fight rather than his given ability. When Li Ho starts smashing Ueki’s trees with his bare hands, not even the sarcastic talent can help our hero. So what can he do when Li Ho unleashes his most powerful attack: The Count of Monte Cristo?

With another win and another zai under his belt, Ueki is able to relax for a little bit. When traveling by train one day, he meets Junichi Baba a.k.a. B.J., a hip-hop enthusiast who takes an immediate liking to Ueki. So why does he also say his name is Robert Haydn when he discovers that Ueki is also a gifted? Fortunately, B.J.'s ability to turn coins into wind is not enough to stop Ueki. The two part on friendly terms, but when the real Robert Haydn shows up, what will happen to Ueki’s new friend?

The Law of Goodbyes

Mr. K sacrifices himself to save Ueki from certain death.

Ueki finds out why Mr. K was so interested in him. Ueki also gets a new God Candidate, Yodogawa (AKA Yotchan), who wants him to drop out of the battle. Ueki fights his next opponent, Bolo T, who can turn his forehead into a diamond.

Fair and Square! The Law of Onimon!

Ueki's next opponent is Onimon (full name - Oniyama Monjirou), who can turn the dirt he kicks into cannon balls. This guy is different from all the other guys, and it's not because he likes to shorten names.

The Law of Onimon's Training

The fight between Ueki and Onimon reaches its conclusion. A week afterwards, Onimon trains Ueki so that Ueki can fight a stronger enemy known as Kuro Kage, one member of Robert Haydn's Ten.

The Law of Justice That Never Comes

Ueki continues his fight against Kuro Kage, whose sad past is told by Kuro Kage's little brother.

An anime one by Studio Deen correctly: adapting it AFTER it was finished rather than adapting it BEFORE it finished. Fascinating. And this anime is by far, my favorite shonen anime ever since watching Full Metal Alchemist. Story... It follows the story of 12 year old Ueki Kouske. He has the power to turn trash into trees. He was given this power by the teacher Mr K. (Kobashen) as a God Candidate (King Candidate in the manga). This is a big battle where other middle schoolers with power fight for the Null Talent of Zai which lets you get whatever talent you want. If Ueki uses his power on a non talent user, he loses his Zai, and if he loses all of these, he will disappear, and Mori is going to make sure he doesn't. This series basically follows this plot line. I love this story. This is the summary I can give without spoiling the whole thing. It's simplistic, but it's really good in my opinion. In my opinion, PERFECT for Studio Deen considering their mindset. I was engaged all the way through. Good for preteens or kids in their nines and tens. Animation is nice and fluid for something so "old." Nothing too bad, nothing too horrible, but I love the mad hair colors like TEAL HAIR, and ORCHARD HAIR and whatnot. IT'S FUN. I never knew hair was teal before in anime until I saw this. The art is better than in the manga, too, because the manga's art was horrible! The anime proves that it can be art fluid.  THE SOUND IS AMAZING. It fits with the world well, the voices are PERFECT. Especially Mori's omg... fits her so well, I can't even. THE CHARACTERS ARE FAB. There isn't much development until later, but I love every single character (including Robert Hayden). All of them are really funny in my opinion and shape up to be a really oddball cast.    I really enjoyed this anime, and would watch it hundreds of times if I could! Such a touching ending. Hit me right at home. Watch it! You'll love it! Who cares what studio did it? It's good.

Start a new discussion for The Law of Ueki anime. Please be fair to others, for the full rules do refer to the Discussion Rules page.