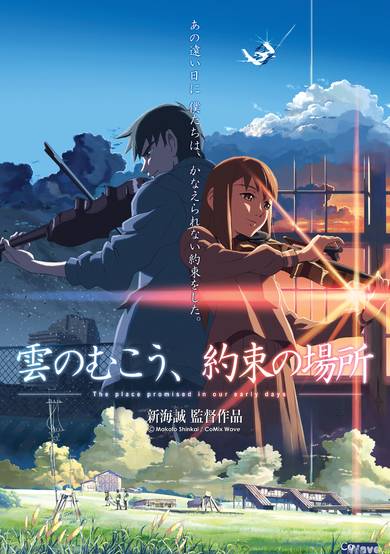 Kumo no Mukou, Yakusoku no Basho

In an alternate-reality 1974 Japan, the country is split, with the southern islands controlled by America and the northern lands claimed by the Soviet Union. Hokkaido, referred to as Ezo in Kumo no Mukou Yakusoku no Basho, decides to construct a tower into the sky designed by Ekusun Tsukinoe. By 1996, Hokkaido Tower's construction is complete and three students of Aomori have big dreams concerning this tower. Hiroki Fujisawa and Takuya Shirakawa are considered child prodigies, and both harbor romantic feelings for Sayuri Sawatari, though neither of them would dare admit it. When a drone crashes down, the two boys resolve to repair it and fly to the top of Hokkaido Tower. Assisting them is their boss at the military plant, Mr. Okabe. They name the drone Bella Ciela, but before their dreams of flying it are realized, Sayuri vanishes. Unbeknownst to them, her disappearance is related closely to the tower that the two dream of reaching.
User Count16686
Favorites Count92
Start Date20th Nov 2004
Next ReleaseInvalid date
Popularity Rank696
Rating Rank1855
Age RatingPG
Age Rating GuideTeens 13 or older
Subtypemovie
Statusfinished

All Kumo no Mukou, Yakusoku no Basho released episodes

Originally published on Anime Viking: http://animeviking.wordpress.com/----------What marks Shinkai’s first full-length movie also remains as his best work to this date. Unlike Voices of a Distant Star’s rather simplistic production, The Place Promised in Our Early Days instead features gorgeous visuals, a breathtaking soundtrack and a much stronger directing overall. Personally, this is the movie by Makoto Shinkai.What makes The Place Promised in Our Early Days such a success is how it is built up; divided into four distinct parts, yet flowing into each other naturally. This way of telling the story strengthens it, since we see the main characters interact with each other and grow up; making us feel the strong bond they all share.But much to my disappointment none of the three characters grow to anything much more than the blank slates they started as. On one hand, this lowers the emotional investment. On the other hand, this increases the chance for speculation.You see, compared to Shinkai’s other works, this one stands out in how it tells an ambitious sci-fi story about three young children and their promise to travel to a seemingly endless tower reaching for the stars. As the movie goes on, so does the characters’ lives. We see them grow up and change, while we are also sparsely given details about how the world they live in functions.This is an interesting approach, as when I finished the movie, I still had not fully grasped the story. There were still dots to connect, details to figure out and so on. With The Place Promised in Our Early Days Shinkai managed to tell a story that is as much as an exciting journey as it is an engrossing puzzle.If I had to summarize this movie with one word, it would probably be: an experience. From start to finish I was completely absorbed into it and the ending left me with a feeling of admiration. It is the kind of empty feeling you have after finishing something really good. The fantastic music definitely played a big part in this. In the end, I will most likely remember The Place Promised in Our Early Days for a long time. With the exception of a few dumb irks, such as a certain character doing a complete 180 to create drama and a scene bit too magical for my taste, this is a nearly perfect movie.If only Shinkai could make me truly care about his characters.If only.

Let me explain why this is my favorite movie. Now, this may just be me personally, but I love everything about it. I've seen it twice and I still love every second of it. I even convinced my parents to watch it and they enjoy it.This is my favorite of Makoto Shinkai's works that I have seen so far (which includes 5 cm/s).The story is brilliant and develops smoothly over the full hour and a half while keeping a bit of mystery in order to keep the audience interested.I love scenery porn. The art is unmatched in terms of detail, style, and animation. They go above and beyond what is necessary and it might even induce a sort of sensory overload at some points. If you have seen his other works, then you will understand.The sound is always wonderful and their are a few pieces with the violin that just melt my heart.The characters are realistic usually and very well developed. If I met people like this in reality, I'd probably want to be their friends because they are really cool and likable.Tons of enjoyment. More so on the second time through.So, that's my review. Let me know what you think. Maybe something like "OMG how dare u give 5 Cm/S an average score while loving this so much. You hypocritical monster!?!"

I've hoped for much more. Full-length anime movies usually bring enough pleasure to account for 90+ minutes of my time. But this one left a neutral-to-negative feeling. The sounds were muted which did it no favors in the task of bring me into that world. The animation was good, and the main story was interesting - but the ending left me disappointed. It does definitely remind me of the feeling of pointlessness I got from "5 cm/s" - but that one I enjoyed immensely. So this one was probably just not my cup of tea.

Hm... a bit disappointed. Story: 7 - I find the premise quite original and interesting, also a bit confusing. Probably because I was expecting something different and I wasn't in the mood for the style it turned out to be (more 'tangled' than I expected), so I didn't pay the attention I should. Also I felt the development quite slow. Despite this, as I said, it's quite original and I like the idea. Animation: 9 - As always, Shinkai's movies stand out in animation. Beautifully drawn, but I felt that in some scenes it lacked the detail level it has in general; in some scenes from a relatively distant view, the faces of the characters were just two dots and one horizontal line. Sound: 5 - This is probably one of the main reasons I couldn't get into the movie. It felt as if everything was happening in a mute world, the sound in general completely lacks that 'thing' that brings you into the fictional world of the movie. It didn't help to get involved in the story, and thanks to that, the whole movie felt pretty bland. Character: 6 - Not much to say about the characters. Not good, yet not bad. Nothing special, they are just okay. Enojyment: 6 - Probably better sound in general and more dynamism in the story would have helped a lot. That 90 minutes felt longer than they had to.

it was a very gud watch for me the casting was brilliant (same studio as for 5 centimeter per second so go figure :p) thou it might seem slow but it is kinda poetic too @,@ but needs patience if one is willing to watch I felt that most of the characters were kinda dull but I liked the guy who loved the girl and the scenes where they show how both of them had similar dreams and such I loved that part of the movie probably the best part of it

If the producers held this out to maybe a full season of 24 episodes and added more of a story this would have been phenomenal. None the less, it was still a great short.

Start a new discussion for Kumo no Mukou, Yakusoku no Basho anime. Please be fair to others, for the full rules do refer to the Discussion Rules page.