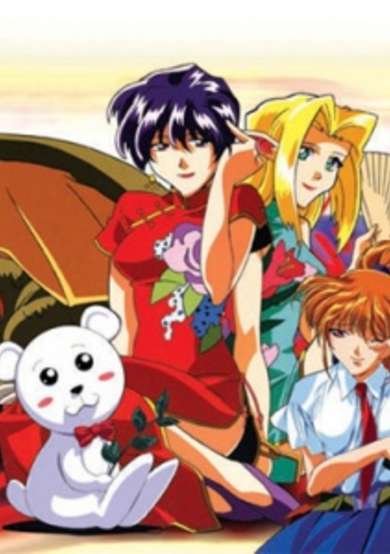 After Junpei botched the second attempt to transport back to Japan, the four embark their journey once again to collect runes imprinted on skin of Elven females by stripping them. Celsia is cursed into the form of another animal this time. (Source: ANN)
User Count951
Favorites Count2
Start Date1st Oct 1997
Next ReleaseInvalid date
Popularity Rank4905
Rating Rank4251
Age RatingPG
Age Rating GuideTeens 13 or older
SubtypeTV
Statusfinished

Even though the second season of "Those Who Hunt Elves" doesn't seem all that different from the first, I found it a lot more entertaining, and not just in a so-bad-it's-entertaining kind of way (though there's a bit of that too). I'm not sure whether this is because the second season is better executed, or whether I just became more tolerant of anime humour by the time I got around to watching it. Maybe a bit of both.Whatever the reason is, it's safe to say that I found "Those Who Hunt Elves II" considerably funnier, in particular the abuse-filled exchanges between Celcia and Junpei. The stories seem better too - even though it's essentially same thing as the first season, the episodics seem more imaginative and interesting. It also feels like there's even less serious content than the first season, which is good because the first season fell flat on its face on the occasions when it tried to be more serious. This isn't to say the plot doesn't have its problems, a glaring one being the lack of urgency on the part of the protagonists, which totally contradicts the events that led up to the second season. The ending was also poor, and was in fact so meaningless that I'd struggled to remember what happened within a couple of weeks of watching it. In addition to its own problems, "Those Who Hunt Elves II" also inherit some of the senseless problems of the first series, such as Junpei continuing to strip elves in the most crude manner possible and the others making no attempt to persuade him otherwise.While "Those Who Hunt Elves II" retained the general feel of the original, there were some small changes here and there: the episode titles now have a common theme; they introduced this adorable teddy bear who doubles up as a kind of mascot for the series, which worked pretty well; there's also the addition of a bizarre but strangely funny line at the end of each next-week-preview clips, but it only really works when Junpei says it. Oh, and they've added a new combination of open/ending themes. The new opening is nothing to write home about, but the new ending theme is great."Those Who Hunt Elves II" may satisfy the conventional goals of a good sequel - building and improving upon its predecessor - but the first season was so far from being good that this second season needed to improve a lot to be considered good itself. Unsurprisingly, it falls short. It's funny at times, but not consistently so; it's better, but still suffers from too many of the original's problems. It's an example that, no matter how much you decorate and polish a turd, it's still just a turd.

Start a new discussion for Elf wo Karu Mono-tachi II anime. Please be fair to others, for the full rules do refer to the Discussion Rules page.