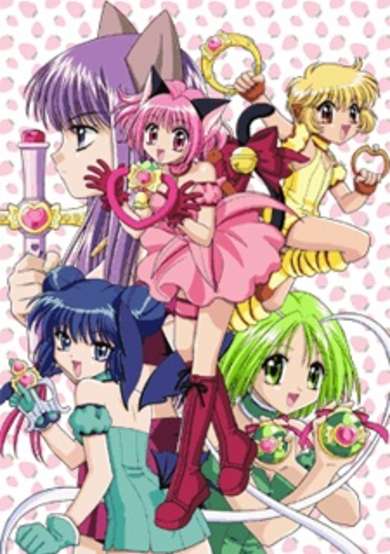 The story of Tokyo Mew Mew begins when the main protagonist, Ichigo Momomiya, attends an endangered species exhibit with her crush (and hopefully future boyfriend) Masaya Aoyama. Their peaceful day takes a turn towards drastic when an earthquake strikes and Ichigo, as well as four other girls, are enveloped in a mysterious light. The next day, Ichigo begins to behave like a cat and learns from two scientists that her DNA has been combined with that of an iriomote cat as part of Project μ, which aims to protect the world from alien invaders! Aliens have come to reclaim Earth in the name of their ancestors who inhabited the planet three million years ago. To get rid of the humans now inhabiting the planet, the aliens have released parasites that infect animals and turn them into monsters. With the DNA of the iriomote cat now inside her, Ichigo can transform into Mew Ichigo and use her powers to fight off the invaders. Ichigo will not have to fight alone, as the four other Mew Mews take to the stage and join in the battle to protect Earth.
User Count7610
Favorites Count114
Start Date6th Apr 2002
Next ReleaseInvalid date
Popularity Rank1503
Rating Rank5337
Age RatingPG
Age Rating GuideChildren
SubtypeTV
Statusfinished Turning into a Cat: Justice lies in a Girl in Love ~Nya!

While Ichigo Momomiya is on her first date with Masaya Aoyama, she is bathed in a strange light and sees herself being merged with a cat. Afterwards, she begins to display cat-like behaviors. The next day, Ichigo follows Masaya into a park, where a strange jellyfish-like creature takes over a rat's body, turning it into a monster. Ryou Shirogane saves Ichigo and gives her a pendant allowing her to transform into Mew Ichigo. With her new powers, she defeats the monster, turning it back into a normal rat. Afterwards, Ryou refuses to explain what just occurred, so the newly arrived Keiichiro Akasaka offers to do so instead. A new comrade – Justice lies in a real lady ~Nya!

Ryou and Keiichiro tell Ichigo that the creature she saw was a parasitic alien, called a chimera anima. To stop them, the Mew Project infused five girls with the DNA from specific endangered species, enabling the girls to become "mew mews". Ichigo begins working at Cafe Mew Mew while searching for the other four girls who bear the Mew marks. Keiichiro gives her a robot, Masha, to help with her work. While going home, Ichigo meets Mint Aizawa and her dog. Later, Ichigo visits Mint's home to return a handkerchief, but Mint's dog becomes infected by a chimera anima. During the battle, Ichigo discovers that Mint is the second mew mew, Mew Mint. They defeat the monster, returning the dog to normal. Mint joins Ichigo in working at the café 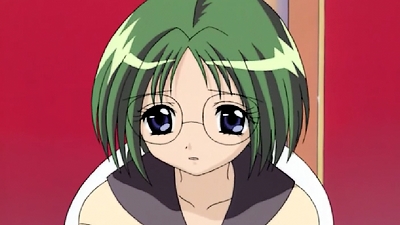 Ichigo meets a shy and timid girl named Lettuce Midorikawa. Later at the café, Ichigo sees her with three other girls, who are trying to coerce an unwilling Lettuce to try to photograph a rumored school ghost. Ichigo "accidentally" dumps parfaits on them to get them to leave Lettuce alone. After work, Mint and Ichigo go to the school to investigate the "ghost". Instead, they find Lettuce who was afraid of being isolated because of her new powers and started "haunting" the pool. After a brief fight, Ichigo and Mint calm her by explaining her Mew powers and welcome her to the team. While Ichigo is walking home, an alien named Kish appears, steals her first kiss, and introduces himself before disappearing again. 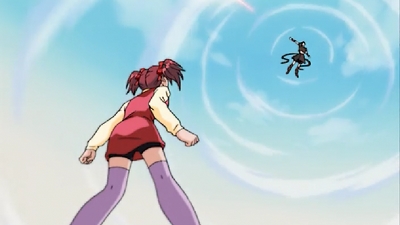 A Tearful Date – the secret I can't tell Aoyama-kun ~Nya!

Upset about her first kiss stolen, Ichigo avoids Aoyama, even declining a date with him. While looking for chimera animas, Masha leads her to the park where she runs into Masaya. Resolved to forget the kiss, Ichigo agrees to spend time with him. Kish attacks the park, turning a lion into a chimera anima. Ichigo leaves a worried Masaya behind as she hides to transform and fight. After Mew Mint and Mew Lettuce arrive, the three defeat the monster. When Ichigo finds Masaya, he scolds her for running away. As they walk home, he explains his worry about her, and Ichigo promises not to do it again. 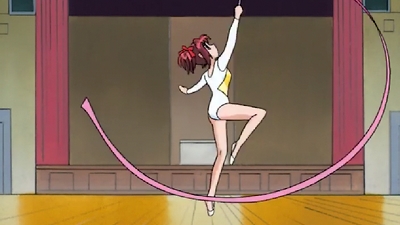 The school rhythmic gymnastics team sees Ichigo avoid the path of an on-coming bus by leaping over it, and the team recruits her. A promise from Masaya to come and cheer for her at the competition changes Ichigo's participation from reluctant to enthusiastic. After Ichigo's spectacular individual performance, Kish attacks with a chimera anima. After the Mew Mews defeat the monster, competition continues; but Ichigo's performance drops during her team's round due to exhaustion from the fight. The team is happy with their second place win and names Ichigo the team's Most Valuable Player. 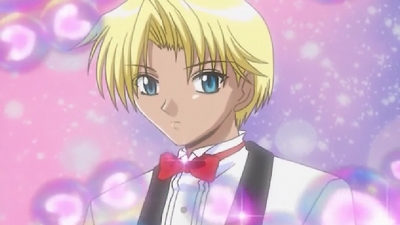 The Piano of the Heart – It's the heart-pounding dance party! ~Nya!

While cleaning the café, a woman approaches Ichigo and Lettuce and begins speaking to them in English (Spanish in the 4Kids dub), but they cannot understand her. Masaya appears and translates for them. The woman, Mary McGuire (Maria Rivera in the 4Kids Dub), is a pianist who Ryou asked for a performance at an upcoming formal party to reward the girls for their good work. During the party, Kish appears and uses a new technique to steal Mary's (Maria's) spirit to create a chimera anima. During the battle, he mentions the name of the mysterious alien leader, Deep Blue. The girls use Mary's (Maria's) music to weaken the monster, enabling the girls to defeat it and return her spirit back to her body. 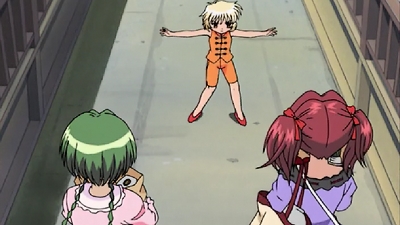 Enter Pudding – The Ears and Tail are Part of the Act!

Returning from the grocery store, Ichigo stops to rest on a bench. A young girl, Pudding Fong, begins performing acrobatic tricks in front of her and then demands a tip. Ichigo gives her a piece of candy then runs off. Angered, Pudding causes Ichigo's cat ears and tail to pop out. Amazed, Pudding chases Ichigo wanting her own set of ears and tail in order to make money. Ichigo finally yells at her but later at the café feels sorry for the girl as they wonder why she wants to make money so badly and goes to apologize. The next day, Kish attempts to steal Pudding's spirit, but the Mew Mews stop him. Using the spirit of another human stolen earlier, he attacks with a chimera anima. While protecting Ichigo and Mint, the monster's attacks; Pudding's mew mark is revealed and she transforms into Mew Pudding. She quickly helps them defeat the monster and is ecstatic to join the Mew Mews. 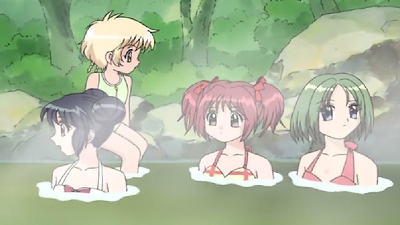 To the Hot Spring! The Mysterious Mountain's Miracle of Love

The girls win a day-trip to a resort in the mountains. On the way up the mountain, they stop at a shrine to eat lunch where a boy named Masazou Aoyamada yells at them for desecrating the shrine of Bacchigappa, the god of the mountain. The girls find a natural hot spring and stop to relax. There they learn that the resort is under construction and that their prize trip is for the following year. Masazou tries to stop the construction workers, claiming that the work has scared away the local otters and is destroying their habitat. Kish arrives and steals the boy's spirit to create a chimera anima. The Mew Mews defeat the monster and restore Masazou's spirit. The incident prompts the other villagers to join in Masazou's cause to oppose the construction. 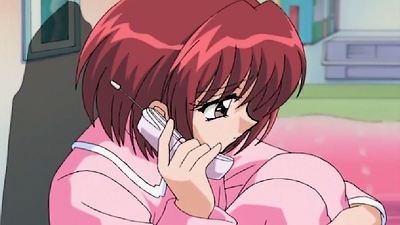 Dearly Beloved Brother – The Memories lie in the Picture

While at Mint's house to borrow a dress, Ichigo meets her older brother, Seiji, who is going to study abroad. She is saddened to learn that they have grown apart after seeing an old photo of the two. Wanting to help the siblings reconcile, Ichigo invites him to attend Mint's next ballet performance. When the girls bring Seiji to Mint's dressing room before the performance, Mint maintains her distance from her brother. As he is leaving, a chimera anima attacks and Seiji tries to protect Mint. After the Mew Mews defeat it, Mint again tells Seiji he should not waste his time there. He gives her a bouquet of flowers and tells her that she is still important to him. 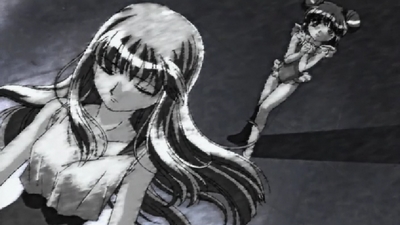 One night, a mysterious girl saves two people from a chimera anima. At the café, the girls read a newspaper article about the incident and realize that none of them is the girl shown in the picture. Mint arrives and recognizes the girl as Zakuro Fujiwara, a famous model whom she idolizes. Ryou sends the girls to an audition to meet her, but Pudding's tricks nearly get them kicked out. That night, the girls find her praying at a church where she is attacked by a flock of crows infected by chimera animas. Before the girls acted, Zakuro transforms and defeats them all. Afterwards, the girls are shocked with she refuses to join them and dismisses them as annoying.

I swear i am inlove with Kisshu (Dren) !! This anime is an absolutely wonderful. Every episode brings you in more and more. You will adore to see what happens, I also believe it is best to watch in Subbed. As dubbed also ends at Episode 26.

One of the first titles you think of after Sailor Moon. Was it good? Not really. Regardless, it holds a special place in every mahou shoujo fan's heart.

Beeing th first anime I've ever watched, this awakened the little child in me again. I never had so many different emotions in any anime before. The animations are flawless, the soundtracks are cute and I really think the characters are very unique. I can only give it a 10 in every category possible. Must watch though it obviously is a child series!

Start a new discussion for Tokyo Mew Mew anime. Please be fair to others, for the full rules do refer to the Discussion Rules page.