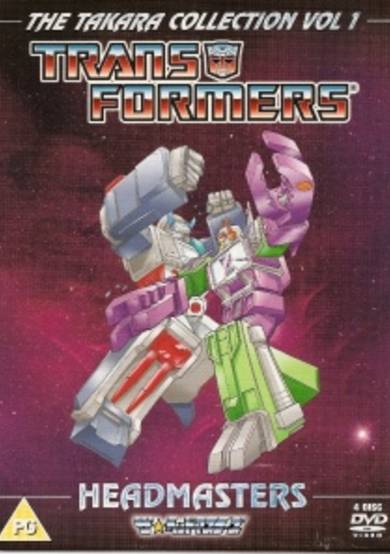 Headmasters starts with Galvatron leading a new batch of Destrons to wage war on Cybertron, the Destron Headmasters. The Cybertrons are rescued by the arrival of the Cybertron Headmasters, led by Fortress (Cerebros, the head of Fortress Maximus). It is revealed that Fortress Maximus left Cybertron millions of years ago in search of energy, and have finally managed to come home. He explains that the Headmasters are from a planet called Master; the human-sized robots who live there built themselves Transformers-sized bodies. They can then transform themselves into the heads of the robots, and have now joined the Cybertron-Destron war. (Source: ANN) 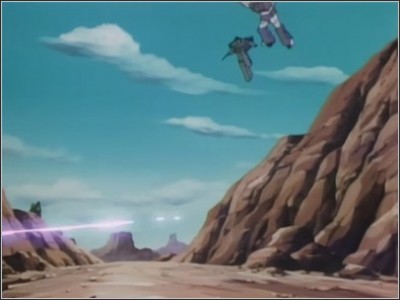 Four Warriors Come Out of the Sky

The first episode recalls the Cybertrons and the Destrons leaving Seibertron for new resources and Megatron being rebuilt as Galvatron. Under the leadership of Rodimus Convoy, the Cybertrons have finally driven off the Destrons and have brought peace to their home. The leadership is passed back from Rodimus Convoy to Convoy and both Seibertron and Earth are at peace. Suddenly in the year 2011, the space bridge reactivates and Galvatron, along with his new set of Destron warriors, Skull, Wipe and Weirdwolf, launch a new campaign of terror. The Dinobots and the Technobots head out to stop the Destrons, while on Earth, Convoy receives word of the Destron attack. Sixshot leads his brigade against the Cybertrons and Ultra Magnus. Meanwhile, Daniel and Wheelie run into Dinosaurer, but manage to trick him into crossing a flimsy bridge and falling down into the river below. As Sixshot and Ultra Magnus duel, the Trainbots suddenly arrive and the Cybertrons head back toward base. The Constructic 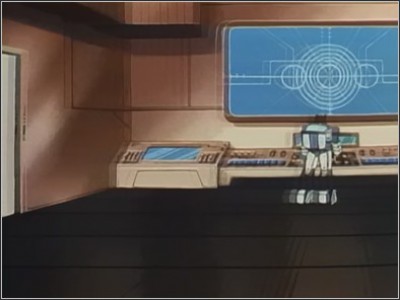 The Mystery of Planet Master

The four robots who mysteriously appear do battle with the Destrons, who happen to be Headmasters as well. Wipe tries to put Brainstorm to sleep, but a blast from Chromedome saves him. Convoy is in serious jeopardy from Galvatron until Hot Rodimus appears and saves him. A fierce battle rages between the Cybertron and Destron gestalts, until the mysterious spaceship shows up and sends the Destrons running. Fortress appears from inside the base and Cha recognizes him as an old friend. Fortress then explains to the Cybertrons the origins of the Headmasters -- how they had created the bodies for themselves on the planet Master. Meanwhile, Convoy heads toward Vector Sigma when he suddenly is aided by the appearance of the ghost of Alpha Trion. Blaster gives Wheelie a tape of his for some unknown reason as he heads back to Earth with Hot Rodimus and Ultra Magnus. As they enter the base, Blaster spots Ratbat and sends Steeljaw after him. It turns into a tape free-for-all as Soundwave appears. The Destrons manage to put Soundwave back together after his struggle with Blaster and rename him Soundblaster. Back on Earth, Sixshot sends Dinosaurer heading toward an energy plant in his battle station mode, but Metroplex moves in to intercept him. They battle when a strange creature suddenly appears from out of the ground and incapacitates Metroplex with a blast. Ultra Magnus reports this to Rodimus Convoy back on Seibertron and he prepares to send out the Cyberton Cassettes, still upset about Blaster's destruction, to figure out what's the matter. Rodimus Prime announces that the Cybertrons have been working on repairing Blaster, who is reborn as Twincast. With the reunion over, Twincast and the Cybertron Cassettes head to Earth. As Superion and the Cybertron Triple Changers battle Bruticus and the Destron Triple Changers, Twincast and the Cybertron Cassettes sneak into Dinosaurer and defeat the Destron Cassettes. The Destron Headmasters take the creature with them to Seiertron a 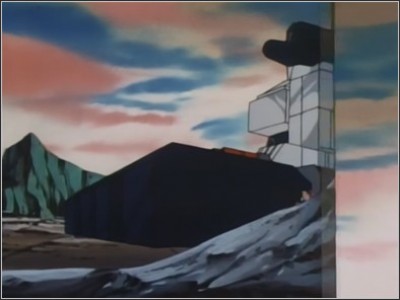 The Cybertron Headmasters, flying around in Fortress' ship in space, pick up a couple creatures wearing exo-suits who are badly injured. They take them inside and work on them, while hearing their story. They aliens reveal that they are from the planet Beast, a planet where the inhabitants resemble humanoid animals. Their planet has come under attack from the Destrons, who are enslaving their people, and they were barely able to escape with their lives. They request the help of the Cybertrons in removing the Destrons from their home. While the Cybertron Headmasters plan their strategy, Wheelie and Daniel befriend a small Battle Beast, who leads them to the enemy's base, where they both get captured. Rodimus Convoy, having heard of the situation, arrives with the Trainbots and the Monsterbots. The Cybertron Headmasters try to save Daniel and Wheelie, but are confronted by the Destron Headmasters. Rodimus squares off against Galvatron, with Cyclonus lending an unwilling hand. Inside the 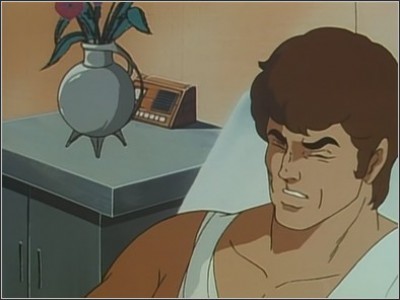 Approach of the Demon Meteorite

The Aerialbots, patrolling in outer space, pick up a large meteorite, which possesses some strange powers, heading toward the Earth. The Technobots, patrolling the desert area, come under attack from Cyclonus and the Terrorcons. In outer space, Fortress fires the guns of his ship at the meteorite but it has no effect on it. On Earth, Galvatron and the Destron Headmasters meet up with the Sweeps, before the Throttlebots intervene and attack. The Cybertron Headmasters and the Technobots then show up, challenging the Destrons. The Throttlebots try to intercept the meteorite, but it ends up injuring them and their ship. The Cybertron Headmasters head out into space again where they encounter the Destron Headmasters and Galvatron. Daniel is able to actually land on the meteorite since he is not made out of metal though, and he finds out that it is actually a spaceship built by the Destrons to get rid of the Cybertrons. He manages to disable its controls and to blow it up, much to Galvatron' 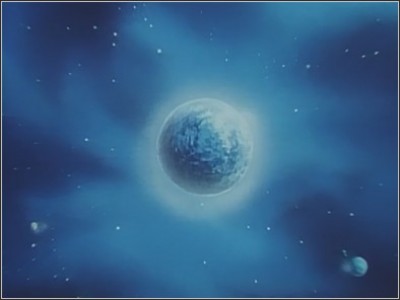 A shadowy figure approaches Galvatron with a plan to defeat the Cybertons once and for all. At the Cybertron base, Arcee receives word that Praun, one of Seibertron's front-line defenses has come under Destron attack. Fortress Maximus and the Headmasters go to investigate, but find only dead bodies there. Rodimus Convoy and Ultra Magnus arrive to inspect the damage, and discover some files missing. Rodimus uses the Trainbots to head into space toward Praun. Meanwhile, Fortress Maximus and the Headmasters get trapped inside a revolving fortress and buried in the sand, while the Destron Headmasters laugh outside. The Headmasters must recall the training they received in the deserts of Master four million years ago in order to survive. They switch heads and manage to escape, then confront the Destron Headmasters. Galvatron shows up on Astrotrain, but Rodimus arrives with the Trainbots and the Cybertrons throw the Destrons into the sand. 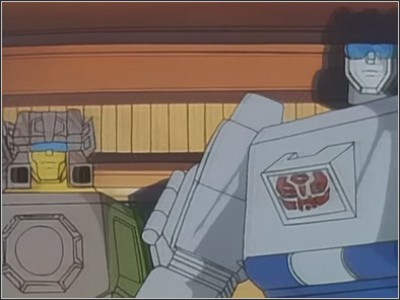 Terror of the Six Shadows

At the Cybertron base, the transmission of a rock concert is interrupted by shadowy figure who threatens to destroy cities unless his demands are met. In New York, the Headmasters collect the transmission and find that it is a different figure who made the threat there. In all, there are six different figures making the same threats in six different locations. In the forests of Great Britain, a ferocious winged wolf attacks; the Headmasters and Metroplex head there to investigate, but are too late. In another city, a laser gun flies around, destroying many buildings, but once again the Headmasters are too late. Daniel returns from gift-shopping with the Trainbots, causing the Headmasters to yell at the Trainbots for not helping. Daniel gets upset, as he had asked the Trainbots to help him pick out a present for his father, and rushes out of the room. The Headmasters then apologize and see Daniel playing with a ninja star. Chromedome recalls a time when his best friend was killed by a n 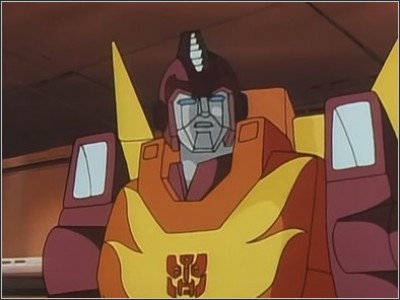 Seibertron is in Grave Danger: Part One

On Seibertron, once again at peace thanks to Vector Sigma, a new compound has been created called Seibertonuron which is many times stronger than Seibertonium. The Destron cassettes find out about it and Soundblaster reports to Galvatron, telling him that the new compound allow him to defeat the Cybertrons. Meanwhile, back on Earth, the Headmasters are working out to keep up their conditioning. Galvatron sends the Predacons to retrieve the compound while the rest of the Destrons head to their new base. The Destron Headmasters and Sixshot meet with the shadowy Scorponok to discuss their next moves while the Cybertron Headmasters arrive at the Destron base. The Combaticons, Stunticons and Destron Headmasters then arrive on Seibertron with Galvatron and wreck havoc on the planet. Fortress and the Headmasters then head to Seibertron with Rodimus, Cha, Blurr and Arcee. They manage to drive back the Destrons - Guardian beating Bruticus, Superion beating the Stunticons, and the Cybertron Head 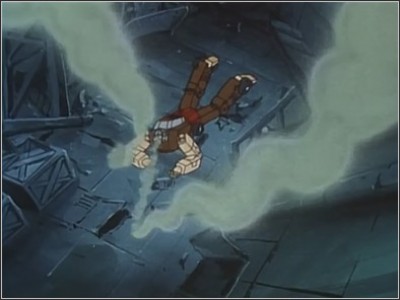 The Predacons are confronted by the Trainbots as Guardian knocks out Bruticus. The Cybertrons continue to plan a way to stop Galvatron from getting his hands on the new compound as Chromedome spots Weirdwolf and Wipe. He notices that they've been heading deep into Seibertron and tries to figure out what they are up to, sending out a telepathic message to the other Headmasters. They arrive, attacking Weirdwolf and Skull, as Chromedome heads underground to stop Wipe. On the surface, the battle still rages on, destroying more and more of the planet. Wipe manages to find Vector Sigma's chamber and he sets the bombs in it, just as Chromedome arrives. The Cybertrons cannot remove the bomb, so they flee the planet after some long, hard farewells. Galvatron arrives in Vector Sigma's chamber just as the bombs go off and is caught in the explosion. Rodimus, Cha and Blurr then depart in search of a new home for the Cybertrons, leaving Fortress in charge.

Start a new discussion for Transformers Headmasters anime. Please be fair to others, for the full rules do refer to the Discussion Rules page.