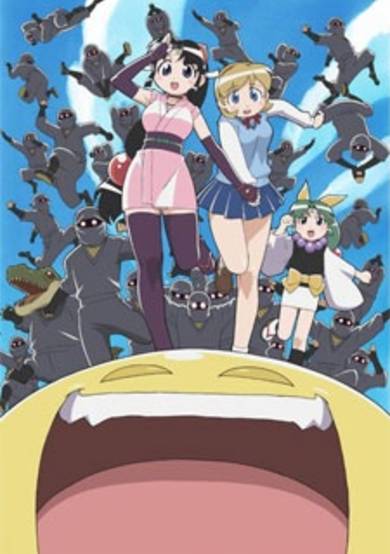 Kaede is a normal school girl who was studying for her exams for school when suddenly she is interrupted by Shinobu, a girl who is a ninja-in-training, attempting to complete her exam. The problem is, in order for her to successfully complete her exam, she must steal one of Kaede's panties! In Kaede's attempt to stop Shinobu from stealing her panties, an unexpected friendship is forged between the two. Kaede soon becomes engrossed in Shinobu's world, surrounded by partying ninjas and a yellow pac-man like thing by the name of Onsokumaru, who claims to be the master of all ninjas! [Written by MAL Rewrite]
User Count2781
Favorites Count11
Start Date10th Jul 2004
Next ReleaseInvalid date
Popularity Rank2932
Rating Rank5086
Age RatingR
Age Rating Guide17+ (violence & profanity)
SubtypeTV
Statusfinished 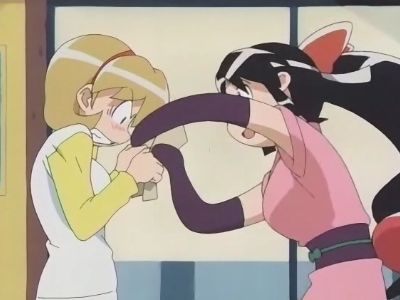 First, ninja trainee Shinobu is sent on a mission by her pervy Head Master to collect underwear from high school girls! Her first target? Kaede Shiranui! 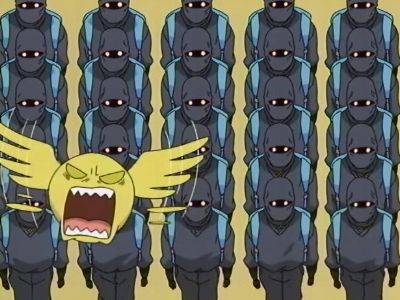 First, rainy weather drives bored ninjas into looking for the Loch Ness Monster in their pond... only to find an Onsokumaru-eating crocodile instead! Then, girl-girl dating?! 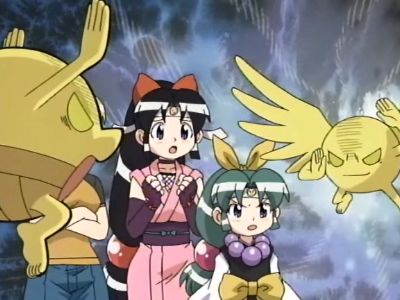 First, Shinobu's little sister, Miyabi, is a total brat! Onsokumaru decides it's time for a little one-on-one... just her, him, and his crocodile power-suit! 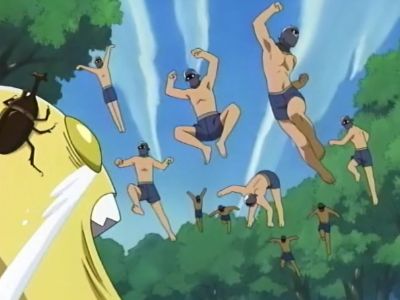 First, rising temperatures provide a perfect opportunity for Onsokumaru to get Shinobu and Kaede into in their swimsuits - and hopefully into a lusty embrace as well! 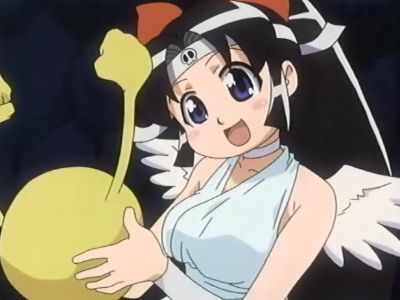 First, Onsokumaru gets sent to Hell! But, Hell can't be all that bad! There are demon schoolgirls, demon wives, demon in-laws... Well, the demon in-laws could be kind of bad. 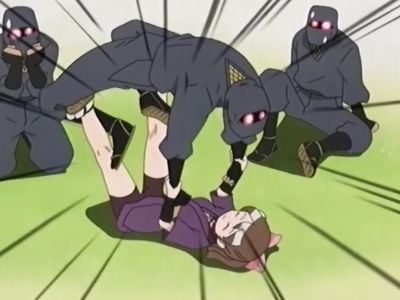 First, the ball of steel finds himself literally stuck to his arch nemesis, Miyabi! With Onsokumaru melded to her clothes, the gang is in search of a way to detach him.

The Girls Get Warm

First, the infamous hot springs episode! Onsokumaru is foaming at the mouth for a chance to see some skin! Unfortunately, Miyabi's stationed her guardians around the women's bathing area.

The Ninjas Have Christmas

First, deck the halls with ninja stars! The ninjas are having their first Christmas ever and it's up to Kaede to teach them about the holiday spirit!

First off, let me explain that this is a gag humor type of anime and it is never supposed to be taken seriously. **STORY** ****This anime does not follow a specific plot throughout and has different plots per episode. Each episode (24 minutes) is split in half. There are two different story plots in each episode, making each story arc 12 minutes each. I think this idea is great as it doesn't make the show so small and actually expands the anime. I think this idea was genius because it has enough content for a 24 episode anime. The humor in this anime is gag, little humor... In the first 5 minutes. After that, it takes a turn for crude kind of humor and it really has a positive impact on the story and the anime itself. I found myself laughing multiple times on each and every episode. By the way, the ending was highly satisfying. This section gets a **9/10** due to the rare feeling of worthless plot arcs (it only happened once to me). <strong>ANIMATION </strong> ****This anime has mediocre animation and is the only thing about the anime that I did not enjoy too much. My thoughts on it are biased, as I despise older anime. So I give it a **7/10** because some of the dislike for it is only because of my biased opinion on older anime. **SOUND** ****The opening and ending song are pretty memorable and deserve praise for being able to fit the gag type of anime this is. The dub is what I really wanted to discuss in this review. I don't like dubs of anime, but this dub is amazing and actually makes the humor alot more hilarious. In the first episode, it is a bit awkward and kind of bad, but trust me when I say the dub gets alot better past episode one. I give this section a **9/10** because of the episode one dub kind of turning me off at some point. **CHARACTER** The characters are not developed too much, and I felt the relationship between Shinobu and Kaede was kind of rushed. However, the characters are what really make the show humorous so I give it an **8/10**. **ENJOYMENT** ****Despite its slight flaws, I loved this anime and it made me laugh more than any other anime I have ever seen. Other people may not appreciate or enjoy the humor, and that's okay, but I personally loved it. It heavily improved the comedy genre in my mind and this is an anime that any comedy fan must watch in their lifetime. Watch the dub! **10/10**. **OVERALL** ****This anime really falls in animation and character development, but it revives itself with the humor and overall enjoyment and happiness this anime can give you. I give Ninja Nonsense (2x2=Shinobuden) a **9/10**.

Wakamoto Norio at his finest as Onsokumaru. Don't expect much story - it's all about the gags and weirdness.

Start a new discussion for Ninin ga Shinobuden anime. Please be fair to others, for the full rules do refer to the Discussion Rules page.