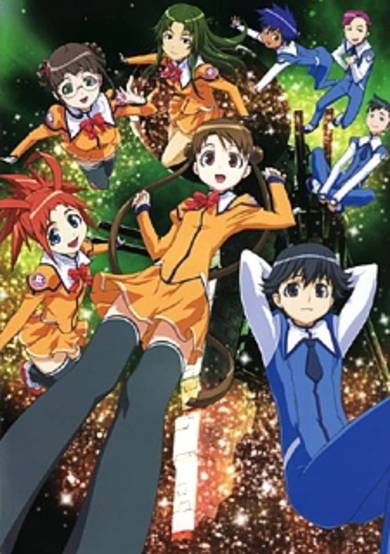 The year is 2356 A.D. - 189 years after a distant supernova caused a global catastrophe that wiped out 99% of the world population. To keep track on all space activities, mankind has built colossal space stations called "foundations" all over the Solar System. After passing the Space Academy entrance exams, Shima Katase embarks to the Earth-based foundation Stellvia to fulfill her dream of seeing the galaxy and to prevent another interstellar catastrophe from destroying Earth. (Source: ANN)
User Count2172
Favorites Count17
Start Date3rd Apr 2003
Next ReleaseInvalid date
Popularity Rank3368
Rating Rank2454
Age RatingPG
Age Rating GuideTeens 13 or older
SubtypeTV
Statusfinished

All Uchuu no Stellvia released episodes 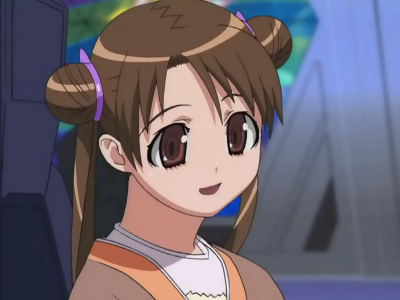 Shima departs the earth, saying goodbye to her family, her brother hands Shima some Conpetto, and says goodbye, as Shima Boards the transport ship headed for Foundation II - Stellvia, onboard she meets Arisa, and the director of Stellvia, as they talk the transport ship is in contact with Stellvia, specifically speaking to Kent Austin, who welcomes them to Stellvia, and prepares the students already on Stellvia to go out and welcome them in their ships, which are lead by Ayeka, everyone onboard the transport is excited to be going to Stellvia as they arriveless Shima settles in to her life onboard Stellvia, after the initial introduction assembly, Shima begins her classes, and is required to select which subjects she would like to learn, and meets a new friend Yayoi She starts the very first lesson she selected which was space training, Shima was at first embarrassed to wear the under uniform but eventually settles in, Shima's first space flight in the Bianca doesn't go well, the instructor tries to stop her machine, but is locked out the system by Shima, which inturn leads to Ayeka Machida of the Big 4 helping, but eventually the Bianca runs out of power, and shima is towed back to Stellvia, Shima feels disheartened. 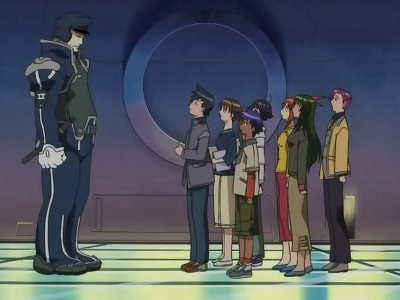 Shimas work is going fairly well in class and Arisa invites herself and all her friends over for a study group with Shima, while Shima was explaining the work to Kouta and the barrier that"l be used, Shimas friends were playing around, much to Akiras displeasure, which leads to Akira coming to their room and telling them to be quiet, which then leads to shimas friend touching the panel and over writing data on stellvias server. They decide to go to the main control room of stellvia to try and write the situation, along the way they run into Kent Austin, Najima, and Shoujin of the Big 4 in different places, upon reaching the control room, they are discovered by Ayeka and Yayoi, which leads to Shimas friend touching the panel again, which makes the situation worse, and Shima worried..the instructor punishes them all after.. 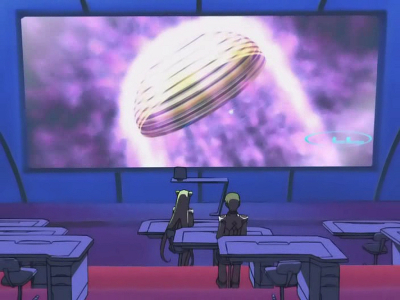 I'll Do My Best

Shima while working off her punishment feels disheartened after a talk with Ayeka which makes her realise a few things, meanwhile Shimas friends were looking for her and run into Ayeka who tells them that Shima may be leaving Stellvia. Shima runs into Kouta while trying to be alone, and tells her not to worry too much about the data when flying in the Bianca upon the next space training lesson, Shima takes Koutas advice into consideration, and much to everyones surprise does very well, and flys almost perfectly, afterwards the instructor talks with Shima about her flying/lesson and shows her the flight record and ways she can improve her performance. 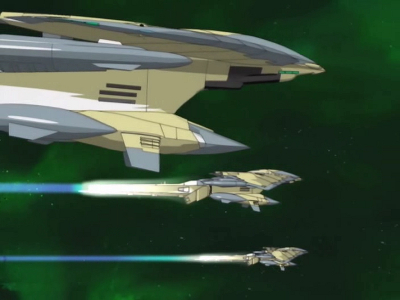 The Students on board Stellvia are informed of a Competition between foundations, and are motivated to do their best by Kent Austin of the Big 4, he tells them whoever wins the Competition will be considered for the Great Mission, everyone is now motivated to do their best The instructors inform the Big 4 of the importance of Winning the Astro Ball event, and are told to bring the glory back home to Stellvia, the Big 4 then tests the students in a difficult task in search of a fifth member of the team, and Shima is the only one that manages to come out on top and get past the Big 4, and so she was invited and accepts to be in the Big 4"s (Stellvias) Astro Ball team at the event. 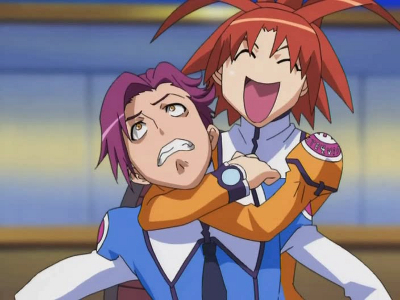 The Competition between foundations is out in full force, with Stellvia currently in first place, the Big 4 + Shima(Stellvia) faces another foundation in the Astro Ball event, but Shima accidental touches a beacon and is dismissed from the match, Shima then feels disheartened but is cheered up by her Friends, and Rinna from Foundation 6 Ultima Whilst at the table they meet another team, who seemed confident in defeating the Big 4 + Shima, Rinna defends Shima and points out the amazing save she made in the game, in her Bianca and tells them i doubt any of them could do that in a training ship, the 5 people from the other team walk away as they leave Shima tells them that she wont lose, no matter what Meanwhile as the game between Stellvia and the said team is taking place, the Big 4 are currently being marked by the other team leaving Shima completly open, she manages to block the other teams attack, and take the ball and score, now full of spirit, shima becomes a part of the Stellvia teams attack force with Ayeka, whilst Kent Austin falls back into defence, everyone is happy with Stellvias amazing victory thanks to Shima. 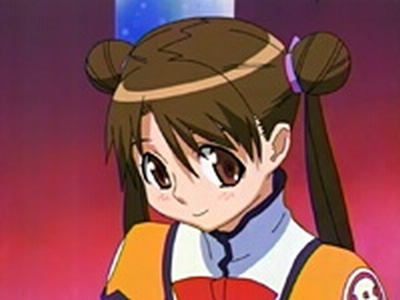 Shima is improving in every subject to everyones surprise, Shima recently ranked 12th in the test, and her friends are optimistic she will eventually become 1st place the students are instructed in the lightning joust training with their biancas, with each student facing one another in turn meanwhile Ayeka seems interested in the students results, as Kent Austin/Ayeka discuss about Shima, and how shes turned into a Honour student the students then face the regular students in the Lightning Joust, which in turn leads to a rather interesting match between Ayeka Machida of the Big 4 and Shima. 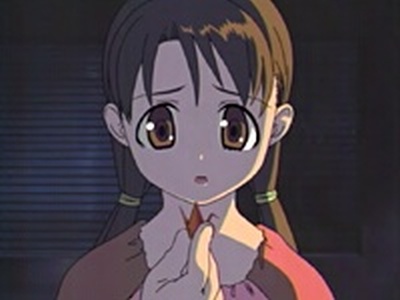 The second wave from the supernova that destroyed the Earth and colored the universe green 189 years ago has approached the solar system. The day after tomorrow will be the day of the Great Mission to protect Earth. 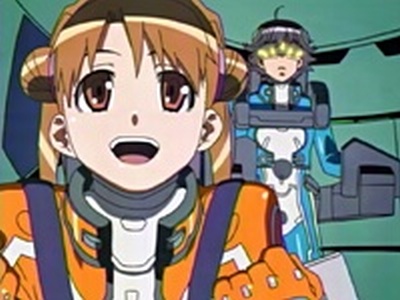 The second wave is moments away from reaching Earth and everyone is prepared, with the Great wall all but set up, and the tatsonaut generators powering and protecting the Earth and the Moon, and the various Langrange points. Kaedes and Biancas are currently in space to destroy any fragments that may prenitrate the Great wall, and repair any holes in the wall that may occur. While Shima is out in space with most of the other students readying herself with the big 4 also, Shima's freinds are closely observing the events as they happen along with everyone from the earth. Shima saves a pilot whose ship was about to be hit, but unfortunately something went wrong. The pilot was saved but the barrier that Shima was trying to set up to destroy the rock didn't work, and her ship was slightly damaged. Shima suffers a lose of confidence and returns to the Stellvia, but is soon cheered up by Arisa and Rinna as well as her overfriends, as the realisation that she saved someone kicks in, and she regains confidence. But there's a problem - a titanic-sized asteroid has penetrated the Great wall. While the big 4 and the other students try to destroy it with the lasers, on their Biancas/Kaedes, it just isnt having much effect The teachers onboard Stellvia as well as Kouta/Shima and her friends decide that the only way to destroy the asteroid is with the Infinite Robot, as they launch and destroy the asteroid, they repaired the breach in the Great wall, as the second wave passes... The earth is well.

Uchuu no Stellvia is a very special and good anime to me personally. It contains the genres of romance, space and sci-fi and a bit of aliens. The story may also contain drama. If you don't enjoy these genres or style, then I suggest you don't watch this anime, but if you don't mind them I also suggest that you give this anime a chance.

Start a new discussion for Uchuu no Stellvia anime. Please be fair to others, for the full rules do refer to the Discussion Rules page.