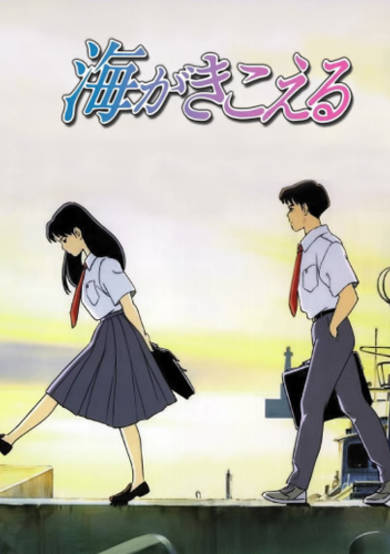 Ocean Waves is a high school love story set in Kochi, Japan. Morisaki Taku and Matsuno Yutaka are best friends when a girl from Tokyo named Muto Rikako transfers to their school. Excluding herself from group activities, she's eventually labeled a snob. Matsuno has a crush on Rikako, so it's no surprise that he gets a little jealous when Morisaki and Rikako start spending more time together. The rumors around school get worse, but Morisaki still insists there is nothing between him and Rikako. (Source: ANN)
User Count5877
Favorites Count27
Start Date5th May 1993
Next ReleaseInvalid date
Popularity Rank1833
Rating Rank6489
Age RatingPG
Age Rating GuideTeens 13 or older
Subtypespecial
Statusfinished

the movie has a classic high school romance type setting tho it has some special elements that other similar shows don't have. it was release in 1993 and the animation was pretty good for the time considering it was made by both jc staff and studio [Ghibli][1].  the story and characters are pretty normal. but there are developments throughout the movie.  overall this movie is entertaining, but if you don't enjoy or can not handle old animation then i would say give it a shot and if it does not work out feel free to drop it. it isn't a master piece by any means so you won't be missing out if you decide not to watch it. [1]: http://en.wikipedia.org/wiki/Studio_Ghibli

It's a very interesting choice to make a romance film where the love interest is a completely unlikable, boring, unsympathetic character. She never really grows as a character, either. She starts out as a mysterious, snobbish child and finishes the story as a spoiled brat snobbish child. The main character's attraction to her is never really shown to have a great reason behind it. Most things that were outside of this relationship were very passable. The friendship dynamic between Taku and Yutaka is relatively interesting, albeit not given quite enough screen times, and ends up with a bit of a strange ending. Thinking of scenes like the high school trip cancellation, I probably would have just preferred it if the movie was just centered around those two, with the love interest serving the point of affecting the relationship, and not just itself. Music is still incredibly quality. Really tries to convince you that parts of the movie have a real meaning, even if it's questionable if they actually do.

Start a new discussion for Umi ga Kikoeru anime. Please be fair to others, for the full rules do refer to the Discussion Rules page.