Earth faces a huge crisis. Aliens want to invade the planet. Humanity's only hope rests with Ataru Moroboshi, who was chosen to represent Earth in a one-on-one duel with the aliens' chosen warrior. There is only one problem with this plan. Ataru is a womanizing, stupid loser. How in the world can he hope to succeed? Selected to fight for the aliens' right to take over Earth is Lum, their curvaceous, bikini-clad princess. Luckily for Ataru, the duel takes the form of a game of tag. All he has to do to win is grab Lum's horns. Not so luckily for him is the fact that she can fly and, being a normal human, he most definitely cannot. Just when it looks like Ataru is destined to fail, his girlfriend Shinobu makes him a promise: she will marry him if he can win. The encouragement is enough to motivate Ataru to succeed. But just when it looks like Earth is saved, he faces another problem. Lum misinterprets something he said and thinks that they are now married! Urusei Yatsura follows the unlikely relationship between the lecherous Ataru, the beautiful alien Lum, and all of the strange people they meet along the way. 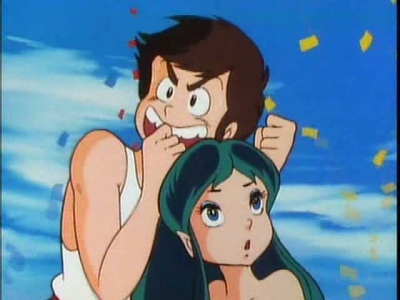 I'm Lum the Notorious! - It's Raining Oil in Our Town

1-1. I'm Lum the Notorious! This episode opens with a baseball game and Ataru getting hit with a left field flyball. Ataru is soon escorted home and discovers he's been chosen to fight an invading alien force's champion in a 10-day game of tag. If he loses, the aliens will invade. But if he wins, the aliens will go home. Ataru isn't at all willing to play tag until he sees the alien's champion: the beautiful Lum. 1-2. It's Raining Oil All Over Town This episode opens with Ataru friends Megane and Lum's Stormtroopers at school who are watching films of the tag game. In this episode, a space taxi gives Ataru a ride home by accident and the fee is...too much. Since Ataru cannot pay, the space Taxi Collection Agency starts stealing all the oil in the world. 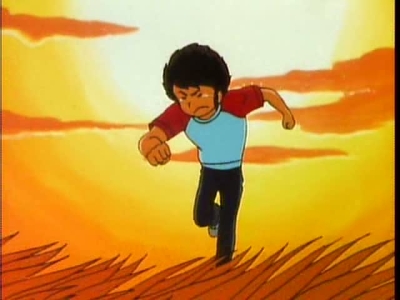 2-1. Space Mail Arrival of Ten-chan! This is the first episode with Jariten, Lum's cousin. Jariten arrives in a giant peach and he and Ataru are enemies at once. 2-2. Mrs. Swallow and Mrs. Penguin This episode opens with Lum putting on makeup to go meet Darling at school. A swallow swallows some food Jariten gives it and it grows such that it looks like a penguin. It's appearance in school is just the start of a full day of panic. 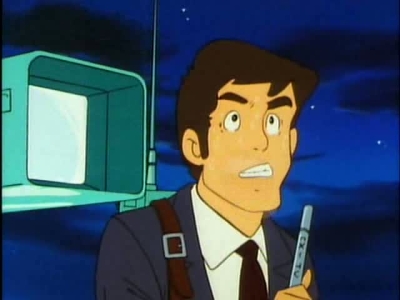 3-1. The Metamorphic Handsome Man Rei is Here! This show features the first appearance of Rei, Lum's former fiance. This episode opens with Ataru in his room watching a storm, and Lum trying to coax him to bed. Shinobu meets Rei and brings him to Ataru's house. After a lot of arguing, Rei challenges Ataru to a duel for Lum. 3-2.Drop Dead, You Lady-Killer! Ataru, Megane, and friends are going to a Gyudon restaurant for lunch and are quite shocked to see Rei munching down food like a black hole. During the rest of the episode, Rei is chasing Lum, Ataru and friends and as the chase goes on, the chaos grows on. 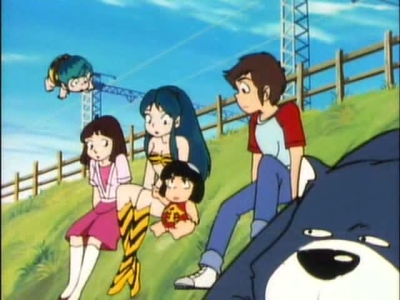 4-1. Kintaro of the Autumn Sky First episode with Kintaro, the vicious little boy with the pet flying bear and the red haired alien nanny. Lum and Jariten meet Kintaro inside a wind carp, and Kintaro tells them he's was looking for his nanny in the carp. Ataru, Shinobu, Lum, and Jariten try to help Kintaro find his nanny by asking around. 4-2. Live Vigorously! Kintaro's nanny, with Ataru's help takes the alien children on a tour of Earth and a Earth child's school. Ataru tells the myth of the real Kintaro who grew up in the wild and slew a demon. So Kintaro decide to live up to his name. 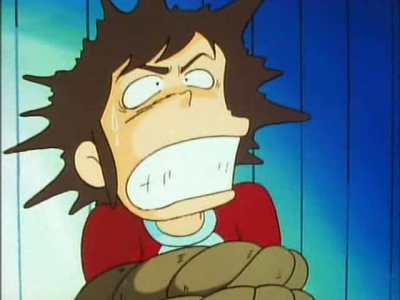 5-1. The Mysterious Seductive Beauty Sakura First appearance of Sakura, The Shinto maiden. Ataru can no longer endure Lum, so he has gone undercover. Unfortunately, at a restaurant, the appearance of Lum, Ataru parents, Shinobu, and Cherry blows his cover; and a mob chases after him. He manages to duck them and bumps into Sakura, who takes him home for exorcising. 5-2. Tormenting Virus Arriving at school one morning, Ataru is greeted by all boys in the school who are waiting for the new nurse, Sakura, arriving at school today. Ataru appears to be sick, but in reality he is possessed; and Sakura performs the exorcism. 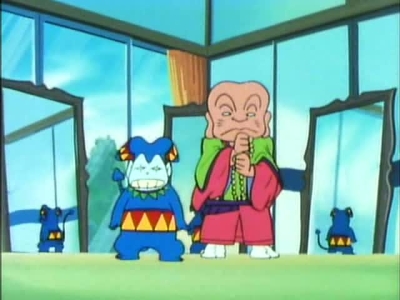 6-1. Love Triangle Black Hole Ataru is phoning Shinobu in order to make plans for a date, when Lum interrupts and get's Shinobu mad at Ataru. Ataru throws Lum out and spends the rest of the episode trying to contact Shinobu. But Lum is persistent and uses a ray to jam the phone lines. But this ray also has the side affect of making a plane and a helicopter vanish. 6-2. Hey Hey, It's a Little Demon Walking home from school, Ataru is assaulted by a group of black cats and gets a nasty bump on the head. At midnight, he is using two mirrors to look at the bump, when a little demon pops out of the mirror. The demon proves to be too much for Ataru and Mr. Moroboshi, so they get Cherry to exorcise it. 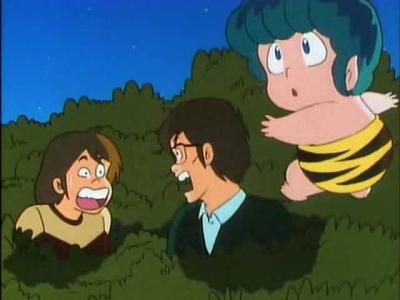 The Scary Electric Shock! / The Doll of Ill Will

7-1. The Scary Electric Shock! Cherry gives Ataru some yellow ribbons which when tied to her horns, negate Lum's powers. In order to coax Lum into wearing them, Ataru has to put on a big charade of really loving her. 7-2. The Doll of Ill Will After an odd loss of control of his body after dinner, Ataru finds out Lum has some clay for making voodoo dolls. Ataru takes full advantage of the situation until Lum make a doll of Shinobu, and Ataru tries to get it away from Lum. Neptune Beyond the Closet / The Confusing Dinosaur Age

8-1. Neptune Beyond the Closet First appearance of Oyuki, Lum friend and queen of Neptune. Oyuki also has incredible ice powers. Megane and friends visit while Shinobu is nursing Ataru, who has a cold; and they discover a gate to Neptune in Ataru closet. By accident, they go through this gate and arrive on Neptune to be greeted by Lum and Oyuki. 8-2. The Confusing Dinosaur Age While Ataru is flying an ultra-light, with Lum and Jariten tagging along, Kintaro crashes into him. With the help of Lum's electric shock, the crash send them all back in time to the dinosaur age. 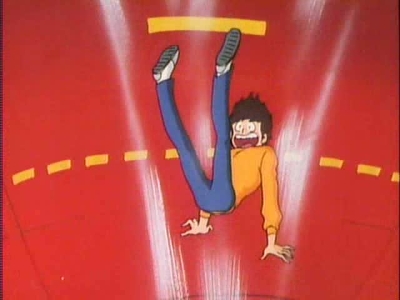 9-1. Sleeping Beauty Princess Kurama First episode with Kurama, the karas-tengu princess. On a field trip, Ataru and friends accidentally meet a karas-tengu who takes Ataru to marry Kurama. Kurama then tries to reform Ataru to be her perfect husband. 9-2 Athletic Woman Hell! Kurama uses a weird dimensional door to try and cure Ataru of his lechery. Inside the door, Ataru faces hostile versions of the girls he loves. 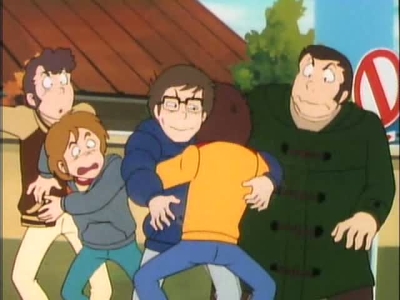 10. Pitter-Patter Christmas Eve Megane and Lum's Stormtroopers set up a plot to embarrass Ataru and get Lum to leave him at the same time. They set up a date who will make a fool of Ataru, but Lum finds out and twists things around.

Start a new discussion for Urusei Yatsura anime. Please be fair to others, for the full rules do refer to the Discussion Rules page.