Everything about him is shrouded in mystery. The mask he can't remove. The past he can't unravel. And the very survival of the people who have chosen him as their leader. But what Hakuoro does know is this: he was gravely injured and left for dead in a forest. A kind young girl named Eruruu found him and nursed him back to health. He was welcomed into a barren land where strange creatures roam, an angry god seeks vengeance, an oppressive government slaughters the innocent, and a bloody war looms on the horizon. Will the masked hero liberate the people who saved him? Can he unlock the memories that elude him? Or will he remain a stranger even to himself? (Source: FUNimation) 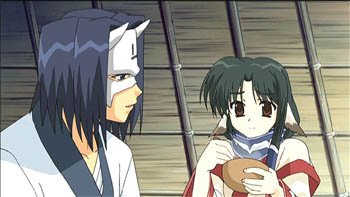 A strange man is found by a girl and her family and nursed back to health. He appears to have lost all of his memories, and can't seem to remove a mask of bone affixed to his forehead. 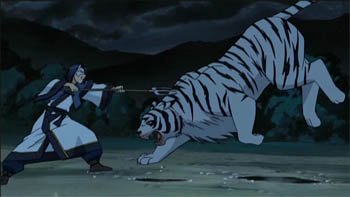 Ruler of the Wild Forest

The Queen of the forest, Mutikapa, is angered and begins killing some of the townspeople. Hakuoro works with the others to figure out a way to defeat it. 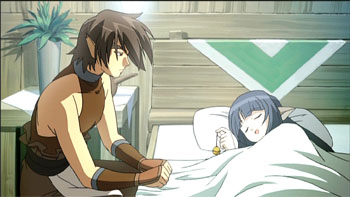 Tusukuru is thought to be missing from the village though is later found offering aid to a young girl with a strange affliction. 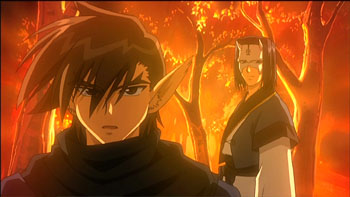 Tusukuru is inadvertently killed and members from the village go on a mission to kill the feudal lord responsible. Daughter of the Forest

Hakuoro takes over command of the station which he captures, beginning to strategically lead a large-scale rebellion. When rallying troops to rise up against the oppressive government, however, he runs into Benawi, the empire's Samurai leader. 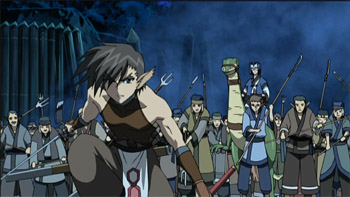 Hakuoro gains more men at his command and once again has a battle involving Benawi and the men he commands. 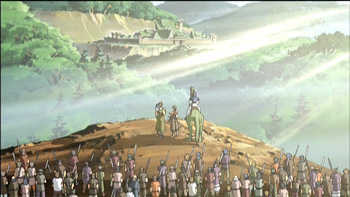 Invasion of the Imperial City

Finally, Hakuoro's small army reaches the castle of Emperor Inkara, to find, when they arrive, that he had already died by Benawi's blade. After this, Benawi and Kurou join Hakuoro. 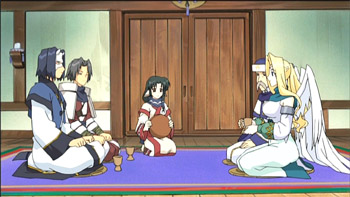 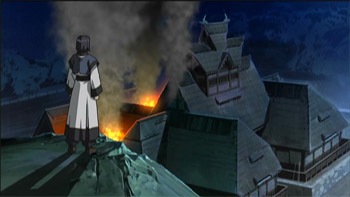 As the large country of Shikeripetim threatens invasion, Hakouro devises a cunning plan to hold off Shikeripetim's emperor, Niwe, and his far superior military force. 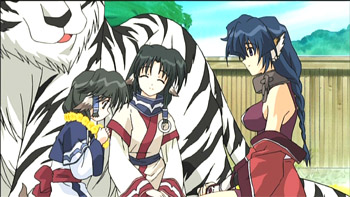 A powerful mercenary is brought to the castle and held captive until she is able to show her worth as a fighter and joins Hakuoro's army.

Utawarerumono manages to be one of those harem animes that anyone can possibly find enjoyable, even if they don't particularly like the concept of harems. Based on the ero-game with the same title, Utawarerumono focuses on an amnesiac man who is found critically injured in a rural village. With the kindness of the villagers, he recovers and spends his days peacefully with them. However, the peaceful times quickly end with a heart shattering event that throws the man and his fellow villagers into a life of war.StoryThe story in Utawarerumono is somewhat simplistic at first, with a majority of the anime following a simple formula of battles, battles and even more battles while introducing new characters. One may find that the way the story unfolds in this show is quite repetitive. However, if you're a fan of war stories with occasionally comedic situations and intelligent strategies to undermine the enemy you will most likely overlook the lack of variation. Despite what has been said, Utawarerumono also has a number of twists and turns (especially in the second half of the show) that should keep the viewer glued to their chairs long enough to see the story through.AnimationAnimation is both a positive and negative point in Utawarerumono. While the animation actually animates the characters in combat (compared to other anime that may just use still images and lines to indicate action) with a good amount of detail, recycled animation occurs. The reused animation is unfortunately quite noticeable (although not too frequent) and may detract one's enjoyment of the battles. The CG animation present in this show is a mixed bag. Some may like it, some may not. Either way, the CG is only used occasionally so it shouldn't be a huge issue. Character designs are more or less consistent, detailed and interesting, albeit one (or more) episode(s) may have the characters looking slightly more odd then usual due to different animators.SoundSound is also quite a mixed bag; you may like it or hate it. The opening song is quite catchy, although there is nothing particularly memorable about it. The ending song also proves to have a unique flair to it, with the overall tone of the music befitting the ambiance of this anime. As Utawarerumono contains a number of battle scenes, the background music does well in giving out the proper mood that is needed to set atmosphere of the show. The voice acting is decent, with no one really standing out but with everyone befitting their character.CharacterUtawarerumono being a harem anime contains the usual female stock characters that you would find from other harems. The serious one, the flirtatious one, the cute one, the shy one and etc. However, due to the majority of the show focusing on war, thankfully most of the female characters are not just part of the harem and play a role in the story. Not every character is developed, most likely due to time constraints (although I'm not sure whether the original game developed the ones missed out in this show). Thankfully the main character and a number of other major characters are given some development and time to flesh out their backgrounds.EnjoymentAs for why I enjoyed Utawarerumono - I have natural bias against anything that would be considered a harem anime, but the nicely animated action scenes and character designs won this series over for me. Storywise I thought most of the show didn't really offer much, but I was quite suprised towards the second half of the show where a number of twists were thrown in, making the overall story of this anime much more interesting. I also found almost all the characters to be likeable, except for the certain few which are obviously meant to be hated by the viewers. I only wish some other characters besides the ones given time were developed more properly.OverallOverall, Utawarerumono manages to deliver an enjoyable package to the casual anime viewer. One may desire to watch this show more then once due to the presence of foreshadowing and a good amount of the background story told in different episodes. Either way, Utawarerumono has a little bit of everything for everyone. It has fan service-like scenes and characters, a large amount of intense action scenes and an intriguing and somewhat deep plot for those seeking something less mindless and profound. It may not prove to be strong in any given area, but it delivers a show that should leave most anime fans somewhat satisfied with what they've just seen.

A previous review of this anime reads, "I'd like this more if it didn't feel like a videogame."  It's also been described as a harem anime. That's 'cause, guess what? It's a visual novel, originally. (A very fun one, at that.) If you go into this, hoping for typical harem shenanigans and save-the-world heroism, you're in the right place. Due to the nature of that game as a whole, that's what you'll get--and as with all other anime based off of VN's, they can't allow for the other female heroines to be not in love with Hakuo. You end up with the harem as a result.  It's very fluffy and funny and the plot-twist at the end is kind of refreshing for what this is. If you can get past the dodgy bits that come with VN-to-anime releases, it's very good. I recommend it, but I also recommend you play the game as well. It's a hoot.

Start a new discussion for Utawarerumono anime. Please be fair to others, for the full rules do refer to the Discussion Rules page.