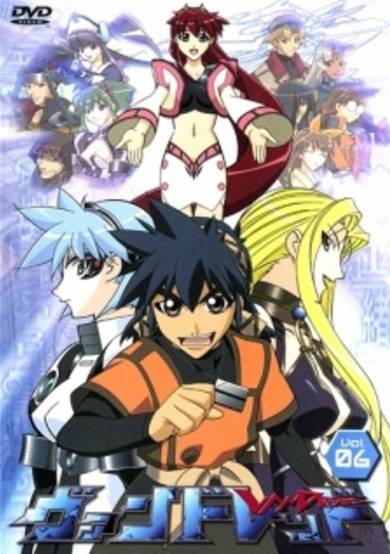 In Vandread, men are from Mars and women are from Venus! Well, not quite. Technology has allowed mankind to colonize the entire Milky Way galaxy, and in one star system, the men and women live on two different planets, Taraak and Mejere. A bitter and very literal gender war rages, to the point where they don't even see each other as the sames species anymore! Hibiki Tokai, a male third-class laborer from Taraak, ends up stuck on a battleship after a botched attempt at stealing a robot. When female pirates capture the Taraakian Vanguard, things don't look like they could get any worse for Hibiki. Unfortunately, they do; when the male crew of the Vanguard fire on their captured vessel out of desperation, they created a giant wormhole, which sucks the Vanguard and the Mejeran pirate's ships into itself! Now, stuck far away from their home planets, these men and women must learn to work together if they ever wish to make it back home.
User Count6194
Favorites Count41
Start Date3rd Oct 2000
Next ReleaseInvalid date
Popularity Rank1765
Rating Rank3811
Age RatingPG
Age Rating GuideTeens 13 or older
SubtypeTV
Statusfinished 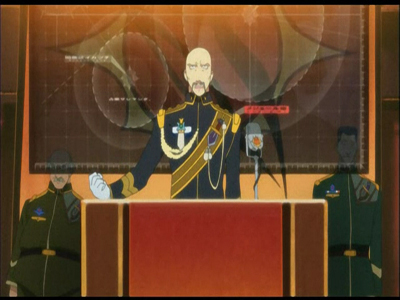 Hibiki Tokai is a third-class citizen who is a parts mechanic. When he boasts to his co-workers that he can and would steal a Vanguard, which is one of the Empire's elite combat vehicles used for defending themselves against the Mejale, he finds himself boxed in by his own words. In order to silence his doubting co-workers, he has to sneak abord the battleship Ikazuchi and find the Vanguard with the marked part on it that makes it his. However, everything doesn't go as planned, as the Ikazuchi takes off for orbit 2 hours ahead of time with Hibiki stranded on board. As if things couldn't get any worse, the Ikazuchi also comes under attack by a group of fearsome women from Mejale - and not just any Mejale women, but pirates! Found out by the Tarak crew and facing execution for being a stowaway, Hibiki comes face to face with a real live woman in the midst of all the fighting, who he immediately runs away from, despite her overly friendly attitude. But the real threat may not come from th 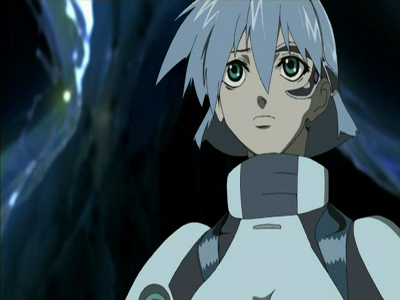 Hibiki finds himself captured by a ship full of women after being abandoned by his fellow citizens, with the exception of two other unlucky men - Bart Garsus, a cowardly, self-proclaimed ""helmsman"" and Duero, a highly educated student who had become a doctor on a whim to stay alive. Things look pretty dire for the men - but while the pirates are deciding about the fate of their new male prisoners, a mysterious enemy begins an attack on them. Now, in a life or death battle, everyone, even the men, must work to escape this new threat. Bart manages to weasel his way into piloting the ship (even though he has no idea how to), and Duero makes use of his medical skills. A despondent Hibiki, left without anything to contribute, feels that he can do nothing to change his pathetic existence - that is, until the vice-commander gives him some words that he will soon not forget... 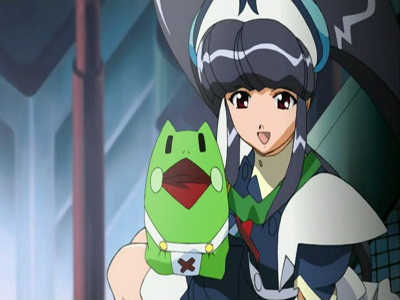 This Is The Path I Choose To Live

The threat is past, but the new ship is unstable, leaving the crew baffled at how to operate it. One by one, the men are taken from their cells in order to try to help out with the repairs of the ship. However, there may be no time for lounging around, as Dita and Gascogne go missing on a supply and information-gathering mission, and the ship plunges into a nebula and asteroid field that threatens to tear the ship apart. It's left to the crew to once again work together to overcome their difficulties. In the aftermath, the crew discovers that it will take 270 days to get home, as they have been thrown to a remote part of space. With this new knowledge, the men and women realize that working together is a necessity to get themselves home. 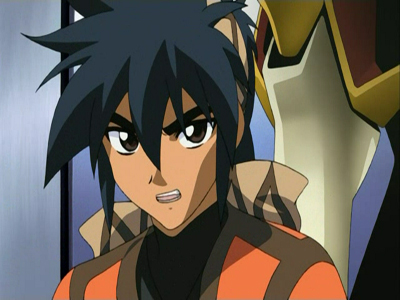 I Want To Know More About You

Parfait begins holding a contest to rename the ship, because she feels that the Ikazuchi is a ridiculous and unfashionable name. Meanwhile, Hibiki proves to be a skilled fighter, however he can't seem to ""play well with others"" or be a team player. In order to give him a lesson, Magno tricks him into being reassigned to the supply depot, which is managed by the tough-as-nails, yet highly logical Gascogne. By placing Hibiki in the role of a supply-providing ""stagehand"", Gascogne plans to teach Hibiki the meaning of teamwork, although it may take more than just himself and the Dreads alone to destroy the latest threat from the enemy. The ship has a new name thanks to Parfetâ€¦ Nirvana, a name that symbolizes Harmony, Stability, and Joy. Dita still has an interest in the ""alien"" Hibiki, who finds the highly energetic girl annoying and would rather spend time trying to find out more about his Vanguard. Meanwhile, Jura schemes to find a way to unite with Hibiki's Vanguard. The Nirvana then comes across a barren desert planet, where they find a artificial structure that is partially buried in the sand. Hibiki isn't happy when the female pilots start to train on the other Vanguards that are left to go down to the planet's surface - especially when they decide to paint them all sorts of ridiculous colors. Despite Hibiki's unhappiness, the Vanguards go down to the surface and find themselves in trouble - but getting out of the situation may be the only way to find out what exactly the mysterious enemy's motivation is. What A Wonderful World

Meia is in trouble! Seriously injured in a battle, and having some 'personal issues' as a result, she is facing quite a struggle for her life. The other pilots do not handle the idea that they may have to replace Meia well, and Jura is unable to command the Dreads in her place. Duero, Parfait, and Paiway struggle to save Meia's life as Meia has flashbacks to her turbulent and troubled past. The latest enemy attack may hinder their ability to bring her back from the brink of death, however, and it is left to Hibiki, of all people, to come up with a plan that just might save them all. Now that things have calmed down relatively, Hibiki now discovers that he still has a major problem - Dita, who still is very interested in him, and whose highly curious actions are starting to get on his nerves. Hibiki having no experience with dealing with women, is at a loss with what to do about the situation, and ends up inadvertantly hurting Dita's feelings. In a rare moment of depression, Dita goes so far as not to talk to Hibiki and state that in battle she won't even combine with his Vandread. The rift may seem impossible to bridge, but Hibiki even goes to Gascogne for advice on what to do. Dita begins to realize that her feelings for Hibiki may go beyond simple curiosity, but hopefully it won't be too late to forgive and forget... The crew on the journey towards home comes across a spacebound colony, where they find a monkey who they would later learn is named Utan. They also come across Utan's owner Rabat, who is more then happy to meet the crew. He manages to get onboard the ship and tries to sell them stuff, as any good sales man would. However, Hibiki, BC, and some of the rest of the crew suspect he may be hiding his true motives, and when Rabat tries to force his way into Hibiki's Vanguard to find out the secret of the Vandreads, their fears are realized. Dita is the only thing that stands between Rabat and the Vanguard, but an angry Hibiki may get there in time to defend her and the Vanguard with his bare hands, if he has to. The crew of the Nirvana come across a planet that is almost completely covered in water. There is one island on the planet, but before they have time to investigate they must face cubed shaped opponents. Jura is as determined as ever to unite with Hibiki, and this is the perfect opportunity for her to do so - although the result may not be what she was necessarily expecting. As Hibiki and Jura crash onto the surface of the planet, the Captain and B.C. go down to investigate, and meet the locals, who seem to be willing to be harvested by the Harvest fleet. Meia and Dita try to desperately hold off the new Harvest fleet ship that is approaching the planet, but it may take Hibiki to motivate an extremely depressed Jura to fight in the new Vandread in order to save everyone. 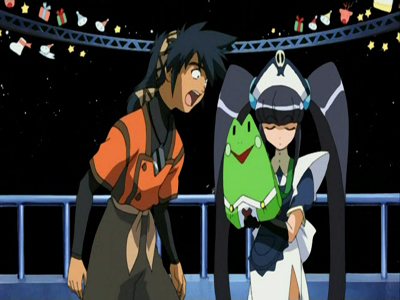 It's Christmas time on the Nirvana, which results in confusion for the guys and excitement for the women - even Magno. BC is the only one to stay at her station, and she just might find something strange in the comet that happens to be passing by. Meanwhile, when Hibiki and the other guys find an old video that shows a family celebrating Christmas together, they are startled to see that it shows man and woman living under the same roof! The source of the men's problems is not the contents of the video, however - they've just found out that gift-giving is part of the Christmas custom, and they all have only a few scarce hours before having to do it!

Start a new discussion for Vandread anime. Please be fair to others, for the full rules do refer to the Discussion Rules page.