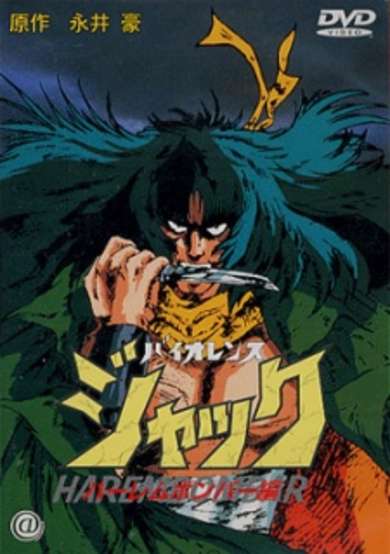 Kanto Hell Earthquake has demolished the metropolitan completely. After the earthquake, Slum King is kidnapping girls and sell them as sex slaves. Mari is wandering on the devastated field looking for her lover, Ken. But she is also kidnapped by them. While she is tortured and trained as a sex slave, Ken saves her. Ken has become the member of Slum King. The king offers condition to him; in return for releasing her, he has to kill Violence Jack. (Source: AniDB)
User Count1018
Favorites Count1
Start Date5th Jun 1986
Next ReleaseInvalid date
Popularity Rank4764
Rating Rank11173
Age RatingR
Age Rating GuideMild Nudity
SubtypeOVA
Statusfinished

Violence Jack is a three part OVA series released from 1986to 1990 based on the Manga of the same name. The action takes place in a post-apocalypticdystopian future after a comet impact has wiped out civilisation. It shares acommon atheistic and central themes with Fist of the North Star and to a lesserdegree Apocalypse Zero, MD Geist and Mag Max in that powerful larger than lifemen are trying to rule what is left of the world. Violence Jack is pretty well known for being an over the topanime full of nudity, sexual and physical violence, pretty par for the coursefor late 80s pulp produced anime such as those mentioned above and the likes ofBlack Lion. True to its name Violence Jack is very violent throughout itsrunning time and there are plenty of tits on show if that is what you areafter. But unlike the likes of Black Lion or Apocalypse Zero that is all thereis to this. Having had several arcs of the manga crushed into a 30minute running time, the story makes little to no sense. There is zeroexplanation of what the characters are doing or what the context of the storyis. Character’s actions make little to no sense for example Jack is supposed tobe a protector of the weak in line with Kenshiro from Fist of the North Starbut allows an entire village to be slaughtered before he takes any action. Anotherexample of the sheer nonsense that goes on is where a character has been savedrepeatedly by our lead female only to instantly betray her out of jealousy of acuddle. If you are going to watch this then try not to pay attention to what isgoing on as it is complete nonsense. The story issues are exasperated by the anime trying to goout of its way to be as shocking as possible. The sexual degradation of our twolead females takes up 5 minutes of the run time for no reason other than toestablish that the villains are bad guys and get in more tits for you to enjoy,needless to say the anime is horrifically misogynistic. The violence even forthe time is actually not that graphic in the first OVA though it does ramp upin the second and third, sure some arms and heads get cut off but it is nothingextreme especially given the reputation Violence Jack has. If your after thatthen watch the second and the third OVAs and skip the first. As far as the animation goes it is exactly what you wouldexpect from a pulp OVA from the 1980s, its not very good but not bad enough toreally ruin the experience. The music on the other hand is actually pretty goodwith a nice electric guitar and synths running through out. In summary don’t bother watching Violence Jack unless youare a die hard fan of 1980s OVAs. If your after violence and nudity watch thelikes of Apocalypse Zero, Black Lion, Ninja Scroll, Fist of the North Star, MDGeist or Genocyber instead. If you really want to watch Violence Jack skip thefirst OVA and watch Evil Town or Hell’s Wind instead, they do the hard-coremuch better. Check out the Harlem Bomber soundtrack on Youtube though, itspretty good.

Start a new discussion for Violence Jack: Harlem Bomber-hen anime. Please be fair to others, for the full rules do refer to the Discussion Rules page.