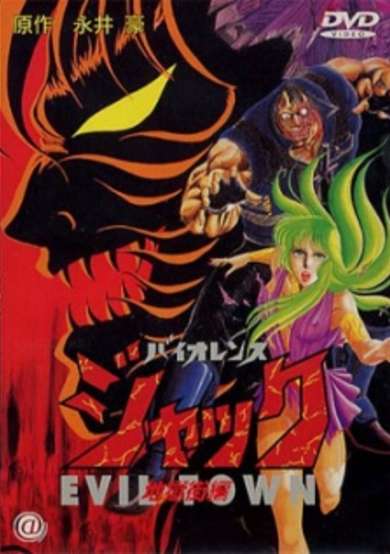 The World as we know it has been torn apart shattered by a series of natural disasters that have turned civilization into a brutish nightmare of survival and has left whole cities buried beneath the Earth. It's now a lethal and chaotic place, a place where only the strongest and most savage remain alive. The strongest of them all is a giant warrior known as Violence Jack… Violence Jack tries to avert a civil war brewing among the wretched inhabitants of a subterranean metropolis called Evil Town. Based on a character created by manga horror specialist, Go Nagai. (Source: AniDB)
User Count752
Favorites Count1
Start Date6th Dec 1988
Next ReleaseInvalid date
Popularity Rank5374
Rating Rank11051
Age RatingR
Age Rating GuideMild Nudity
SubtypeOVA
Statusfinished

Released at the end of 1988, Evil Town is the second oftrilogy of Violent Jack OVAs based on the Manga by Kiyoshi Nagai of the samename and is easily the best.  IchiroItano took over the reins from Osamu Kamijo for Evil Town with Kazufumi Nomurataking over production at Studio88. Evil Town learnt many lessons from thefailings of Harem Bomber released two years earlier and is the OVA that givesViolence Jack its reputation among otaku.Unlike Harem Bomber the plot to EvilTown actually makes sense and with an hour running time instead of just over 30minutes it can ramp up the volume to 11 and not compromise the overall qualityof the anime. Whereas Harmer Bomber tried to crush several arcs into a singleOVA, Evil town takes a single story and does it justice and it is thiscondensed focus that allows Evil Town to be the one Violence Jack OVA that isworth watching.The reason Evil Town works is due to its simple story that requiresminimal contextualisation to make sense and be believable. After the apocalypticevents outlined at the start of Harem Bomber a group of survivors became buriedunderground in a shopping mall and split into three groups living in differentareas all with the same objective of surviving and escaping their prison. In BlockA exists a seemingly lawful collection of people who at first impression upholdthe values of the world they left behind with a functioning civil structure, inBlock B there are a lawless collection of criminals lead by a giant called MadSaurus and a transsexual called Blue and finally in Block C there are acollection of women who have detached themselves from the rest of thesurvivors. This simple set up allows Evil Town to go balls to the wall onviolence in a scenario of desperate people that makes sense.How Jack interactswith these three groups and ultimately destroys the status quo is where the OVAgets it juice from. To avoid spoilers it is best left to say that he starts thestory being dug up by Block A before ending up with Block C and clashing withMad Saurus and that is all you need to know. Violence Jack is known as being oneof the most deprived anime ever made up there with the likes of ApocalypseZero, Black Lion, MD Geist and Genocyber, sorry to those who think that ElfenLied is a violent anime! For most I assume they watched Harem Bomber andwondered what all the fuss was about but it is Evil Town that give this seriesits reputation. Lets not beat around the bush Evil Town is as dark as they comewith multiple graphic rape scenes, huge amounts of violence and evennecrophilic cannibalism. The best thing about this though is the fact that itall works due to the set up, buried away from light and hope the worst thingsimaginable will happen and they do! The animation is what you would expect, itis a step up from Harem Bomber but never gets close to being what could beconsidered good. Importantly it never is actually bad and in particular theclimatic fight between Jack and Mad Saurus is wonderfully animated.Unfortunately the one strength of Harem Bomber its soundtrack is lost. Themusic is understandable minimal but the voice work is very poor especiallygiven Jack has more lines this time and it simply does not work. In short if youwant to see how violent and messed up anime can get then you need to watch HellTown. If you watched Harem Bomber and never continued then get on and watchthis as it is the quintessential violent 1980s anime experience. Go in withrealistic expectations and you will love it.

Start a new discussion for Violence Jack: Jigoku Gai-hen anime. Please be fair to others, for the full rules do refer to the Discussion Rules page.