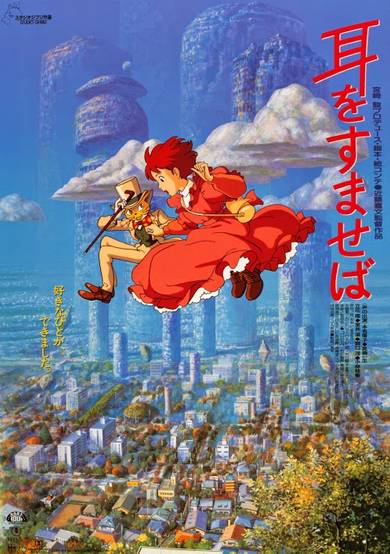 Whisper of the Heart

Shizuku Tsukishima is a free-spirited and cheerful 14-year-old girl who is currently enjoying her summer vacation. She loves spending her free time at the local library where she notices that the books she reads are often checked out by a boy named Seiji Amasawa. One day while riding the local train, Shizuku notices a strange cat sitting near her. Why would an ordinary cat ride a train? Curiosity may have killed the cat, but it can also seriously harm a young girl. Shizuku decides to follow the mysterious cat to see where it goes, and soon stumbles upon an antique shop run by a violin maker named Nishi, the grandfather of the mystery boy who shares her taste in literature. Seiji and Shizuku soon become friends and while Seiji is sure of his dreams and how to follow them, Shizuku is still unsure of her own talents. However, when she sees a strange cat statuette, “The Baron”, in the shop, it seems as if that statuette whispers something to her, tugging at her heart and giving her the inspiration she so desperately needed. One voice pushes Shizuku further than she could have ever imagined, changing her life forever.

All Whisper of the Heart released episodes

I think that this is the most... normal? of the films Miyazaki has made. XD Because of this, it wasn't really what I expected when I started watching it, but it's still a good movie. It's probably the least intense of the bunch, and it focuses more on the life of a young girl who's an aspiring writer.It's also linked to the other Ghibli movie; The Cat Returns, although you don't have to have seen them both for the films to make sense. I would watch this movie just because... it's a Ghibli movie and they all rock, but keep in mind that it's not the typical Miyazaki film. :)

It was hard getting my mother to sit down. It's not that she doesn't enjoy watching films with me and my sister, but she's not exactly a fan of animated films- she often feels that they're not particularly rooted in reality, and I'm not sure why, but she tends to stray away from them. With a bit of trickery (sorry, Mom), I managed to get my mother to sit and watch *Whisper of the Heart* in its entirety. Directed by Yoshifumi Kondo for Studio Ghibli, *Whisper* is the story of Shizuku Tsukishima, a Japanese girl going nowhere fast. Shizuku hasn't a clue as to what she wants to do with the rest of her life- she'd be happy sitting on her bed, reading library books. In the film, she finds that most of the books she checks out from the library have been checked out by a certain Seiji Amasawa- I don't feel that it's too much of a spoiler to say that she eventually encounters this person. If you're used to some of Ghibli's somewhat more fantastical works, such as *Castle in the Sky*, you might want to take into consideration that while *Whisper of the Heart* contains all the magic and joy that mark it as one of Ghibli's works, it's no fairy tale. Besides one scene in the imagination of the protagonist (a wonderful, insane part of the movie), *Whisper* tells a story that happens in our world. Personally, that's part of the appeal of the film for me; it's an everyday story told in an extraordinary way. The protagonist wasn't a tired archetype- she was full of personality, well-rounded- *Whisper* deserves special acclaim for having particularly strong character development. My mother, who tends to speak her mind during movies, was rather quiet while watching *Whisper*- she spoke up a few times and commented on the plot and characters- they caught her attention and, like magic, enthralled her. Visually, *Whisper of the Heart* is just as beautiful as Ghibli's other movies. Everything's nicely animated, the use of colour is fantastic, and the backgrounds? I could rave about those for days. My sister, an artist, noted that *Whisper* is full of wonderful little touches that make it seem much more realistic- characters are animated with their own odd foibles and such- they behave like people. There's a loving amount of detail that went into this movie, and it all paid off. As for music, *Whisper* features quite prominently the song *Country Roads*. I'm not usually one for country music, but by the end, my family was singing the happy little ballad of West Virginia. Besides having good music, *Whisper* featured very good voice acting. We watched the English dub of the film, and the VAs for the protagonists all seemed to fit perfectly. Overall, *Whisper of the Heart* is a wonderful movie- it has a wonderfully engaging story and characters, gorgeous visuals and music that's practically *guaranteed* to get stuck in your head. There are very few animated films that my mother has enjoyed; this is among them. I hold no grudge against her taste, but I think it's worth saying that if you have a friend who thinks that he or she doesn't enjoy animated films, that person hasn't seen *Whisper of the Heart*.

Another great movie from Studio Ghibli. Of course not its best, but still a great entertainement. The Story is pretty simple and linear. As usual with Ghibli, characters don't have a big quest to fufill in this movie. You are not expecting much and not receiving much in return. I mean, it's a love story... Everything is naturally obvious and predictible. Although, the story itself is entertaining for the lengh of the movie. It's a movie, you don't really need a plot twisting ending like Fight Club or Shutter Island. The Animation is classic to Ghibli studio. As a fan of their work, I am probably biased. The artwork is familiar and contains the signature of Ghibli. Nothing to say about it. Sound probably deserve a higher note. Soundtrack in general didn't really bother me or amaze me, BUT if it wasn't from ''Country Roads'' the theme song I would have been indulgent. Sadly, I watch an episode of American Dad were the song was featured. I couldn't stop laughing! For the first minutes, I would only think about American Dad instead of Whisper of the Heart. Characters were great. There didn't had much depth, but as a said, it's a love story... You don't have to expect to have huge back stories behind everyone. They were funny and classic. The land in the common field of Ghibli's protagonists. I am not especially fond of lovey-dovey teenagers in love, but I can say, they were cute to see. The whole movie was cute. This studio has a way to make adorable love stories. Even though, everything was close to past work from Ghibli, this movie was a good experience. It takes you to another perspective and gives you the feeling you a fluffy sensation in your chest... yeah, I am cheesy.

Whisper of the Heart is one of the most down-to-earth, un-Ghibli movies Studio Ghibli has ever produced. And it's one of their very best, I think. The story of Whisper of the Heart is a very simple romance about two people who inspire creativity in each other. Shizuku is a girl about to graduate from high school, and has taken on the job of writing new lyrics for the song "Country Road" so that it can be performed at the graduation ceremony. She reads a lot of books, and one day finds that every book she ever borrowed from the library was previously taken out by a mysterious boy named Seiji Amasawa. On paper the story is extremely simple, but the visuals carry a lot of concepts across without having to mention them outright. This is one of the most meticulously detailed animated movies I've ever seen, and it gives the audience a great sense of location in the city where it takes place, as well as a sense of how big the city is. One of the movie's most important settings is an antique shop. The sheer detail of how it's drawn combined with how much backstory is given to the items there suggest that there's a story behind everything. And everything in the movie outside of the antique shop is shown to have stories behind them too. The main character learns to recognize these stories and make up her own to encompass the world she lives in. There are a lot of shots that show up when the characters are feeling bad that show the whole expanse of the city, suggesting that the world is a lot bigger than they are. This follows logically from saying that everything has a story behind it; the story of the characters that the movie shows us is just one story embedded in a gigantic network of other stories. But that doesn't mean their story doesn't matter. The amount of effort, color, and beauty put into the Shizuku's daydream sequences in which she builds a story around things she ran into during her everyday life, and how the images in her daydreams appear to float above the skyline of the city suggest that while each story is only one in a multitude, each one is great and expansive in its own way. Whisper of the Heart is a romance about two creative people who inspire each other, which in turn causes them to be inspired by the world around them; Shizuku learns to recognize how her problems are incredibly small in the grand scheme of things, but not necessarily insignificant. She learns how much learning the stories of others can influence you, and so tries to make the best of her talents and creativity to give more great stories back to the world. As mentioned before, the detail in this movie is almost unbelievable. The rest of the animation is equally top-notch, with a lot of effort clearly put into making light reflect off of things realistically and into the characters' body language. This is the kind of movie that I get really emotional just thinking about, and it's given me tons more appreciation for the song Country Road to say the least. It has a lot of simplicity, but that doesn't take away any of its beauty at all. If straight-up, down-to-earth romance is your thing, I really recommend this movie if you get the chance to see it.

Wonderful story,animation and music but the amount of times characters almost get run over is just disturbing.

I've always preferred Studio Ghibli's more human movies over their big fantasy epics, and <i>Whisper </i>is a big reason why, cliche story and all. No matter what kind of mood I'm in, this is one of those movies that will have me grinning like an idiot by the end. My favorite Ghibli film, and one of my favorite movies of all time.

Really love this movie. Make my heart melt for a bit. A typical love story for youngsters. If youre up for a chill and relax, then I bet this movie is for you.

96/100 Studio Ghibli's best film. One of the most beautiful, realistic and soulful anime films I have ever seen. I simply love how grounded it was (except for one mesmerising fantasy sequence), and the simplicity of it, and yet at the same time, it's complex. I loved all the characters in this film, and it gave me a warm feeling of pure comfort. The ending is beautiful and works perfectly. It's a great shame that the director, Yoshifumi Kondo, died shortly after the film was completed, because I'm sure he would have made many more great films.

Start a new discussion for Whisper of the Heart anime. Please be fair to others, for the full rules do refer to the Discussion Rules page.