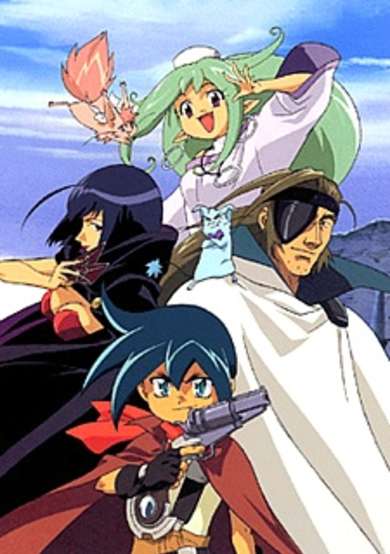 This anime is based on a playstation game under the same title. The story is about four people who travel the desolated land of Filgaea and carve themselves a legendary story while they're at it. These adventurers are Sheyenne Rainstorm, a gunslinger who holds the legendary weapon called ARMs; Kiel Aromax, a scientist who looks like he should be carrying a sword; Roleta Oratorio the Crest Sorceress, a magic-user who uses cards called Crests to cast spells; and Mirabelle Graceland, one of the Noble Red, which are a family of vampiric creatures who live alongside human beings They also travel with cute little intelligent furry things, from the Popepi Pipepo Tribe, named Isaac and Jerusha. (Source: AniDB)
User Count663
Favorites Count1
Start Date18th Oct 1999
Next ReleaseInvalid date
Popularity Rank5663
Rating Rank7016
Age RatingPG
Age Rating GuideTeens 13 or older
SubtypeTV
Statusfinished

Loretta Oratorio and Mirabelle Graceland are two thieves looking to steal an object of great power: The ARMS. They break into Alcatraz, the floating prison in the sky, and soon meet Dr. Kiel Aronnax, who escapes from imprisonment. The three try to escape, while trying to find the treasure, but instead stumble upon a mysterious ten-year-old boy named Sheyenne Rainstorm!

In hopes of finding his real body, Sheyenne, along with Kiel travel to a famous thieves' bazaar. Meanwhile, Mirabelle and Loretta go to an infamous ARMS collector in an attempt to relieve him of his collection. When their plan fails, the two bandits decide to steal Sheyenne’s weapon to sell it!

Sheyenne, Kiel, and Isaac come across a village plagued by a Sand Dragon who guards a treasure. Sheyenne hears rumors that the treasure being a body, and hoping that it may be his, the trio take on the task of killing the dragon and rescuing Machela, who believes that the dragon is actually her dead fiancee! Will they be able to accomplish their mission? Is the dragon really Machela’s fiancée? And, is the treasure really Sheyenne’s body?

In hopes of finding Sheyenne's missing body yet again, Sheyenne and Kiel travel to the fortress library, Libra, after hearing word of an unidentified, charred body. However, Loretta and Mirabelle have also arrived in the great library in hopes of stealing a book that once belonged to the Evil Race; the valuable Faluna Bible. What the gang doesn’t know is that they have all arrived in the midst of a crisis...

Loretta and Mirabelle attempt to cash in on the inheritance of Rotes, a deceased painter, by boarding a ship to attend the reading of the will and "borrow" a few of his paintings. Sheyenne and Kiel also show up looking for Sheyenne’s real body. As the mysterious life of the painter is revealed, the four will, once again, become part of a huge fiasco

Affair of the Fargaia Express

Sheyenne, Kiel, and Isaac board the train the Faraia Express. However, what was supposed to be a quiet train ride turns out to be a fiasco. Between Loretta, Mirabelle, and Jerusha attempting to steal a man’s suitcase rumored to be full of diamonds, a train conductor who wants to always be punctual and on time, a woman about to give birth and her three little daughters, a man who’s cheating on his wife and the wife, a thief who hijacks the train, performers who are mistaken for thieves, and two Sheriffs who aren’t good at their job, Sheyenne and the gang are in for one heck of a ride!

Someday My Robber Will Come

Loretta and Mirabelle infiltrate a convent of pure maidens after they hear that there is valuable treasure guarded within the convent. Sheyenne and Kiel, who are just passing by, are brought into the convent and Kiel is mistaken for the head maiden, Elizabeth’s, "prince".

Sheyenne, Kiel, and Isaac find one half of a key that could lead them to the Treasure of the Midnight Sun. Fortunately, Loretta, Mirabelle, and Jerusha have the other half. After both groups are attacked, they find themselves in a shady town that is currently involved in a feud that could results in one of the clan's death. Sheyenne and the gang need to find a way to put an end to the ancient feud while finding the treasure.

The Slave of the Game

After Loretta loses to a poker Queen named Estelle, in a high class gambling hall in Los Gomoras, she is forced to sell her body in order to earn money. While Mirabelle works to buy her friend out of slavery, Sheyenne and Kiel come to town and try to unravel the mystery surrounding the voluptuous vixen known as the Queen of Hearts.

Start a new discussion for Wild Arms: Twilight Venom anime. Please be fair to others, for the full rules do refer to the Discussion Rules page.