Witches are individuals with special powers like ESP, telekinesis, mind control, etc. (not the typical hogwart and newt potions). Robin, a 15-year-old craft user, arrives from Italy to Japan to work for an organization named STN Japan Division (STN-J) as a replacement for one of STN-J's witch hunters who was recently killed. Unlike other divisions of STN, STN-J tries to capture the witches alive in order to learn why and how they became witches in the first place. (Source: ANN) 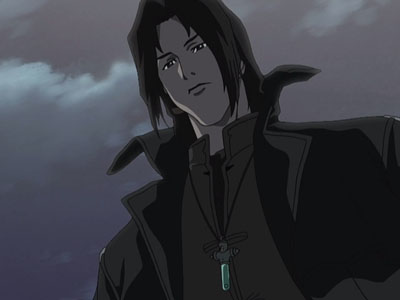 Robin Sena arrives in Japan to replace a fallen member of the STN-J. Engrossed in a witch hunt, the members of the team are unaware that this quiet 15-year-old is the new Hunter and brush her off. When they finally corner the Witch will they come to appreciate Robin's power? 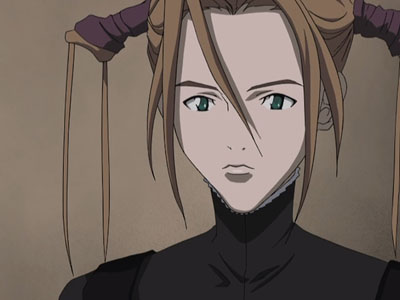 A Witch named Kazuya Misawa is on a high-profile trial for murdering his business partner. However, in spite of police tampered evidence, since Misawa was never seen touching the man it's not likely he'll ever be convicted. The STN-J now has to take care of Misawa themselves, before he kills again. 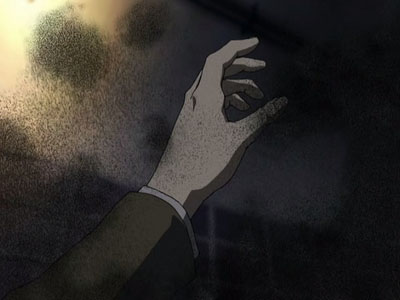 The STN-J is called in by the local police when a dried corpse is found. When Robin finds a dead insect on the body the team goes on a hunt for a Witch who can control insects. They find that there were two previous victims found in the same condition. The cases point to a similar rash of deaths leading back hundreds of years. Apparently, all the dead are Witches. Is the STN-J dealing with an immortal who feeds on Witches? 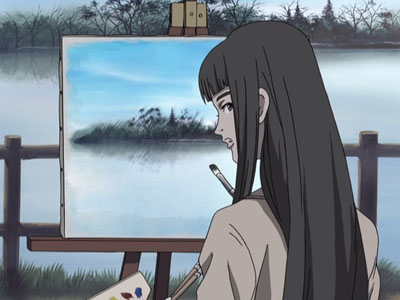 When Amon hands Robin the file for unsolved and possibly Witch related murder cases, she finds a string of deaths that occurred in the very same park she walks through to go to church. There is a young girl who paints landscapes there every day and Robin becomes concerned for her safety. She teams up with Ms. Karasuma to investigate the park, but is she sure the murders were caused by a Witch? 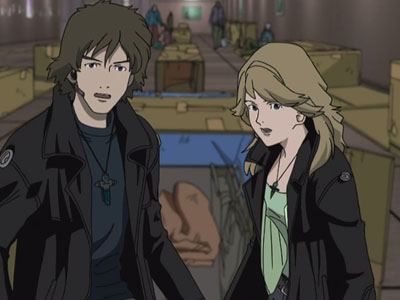 While searching a shanty town for a potential Witch, Sakaki investigates an oddly agitated man. When the man suddenly flees from him in terror, Sakaki chases after him and inadvertently causes terrified man to run into traffic and struck by a truck. An autopsy reveals the man wasn't a Witch after all; just a normal man with the scent of olives. The question remains: Why did he run when he had no apparent reason to? 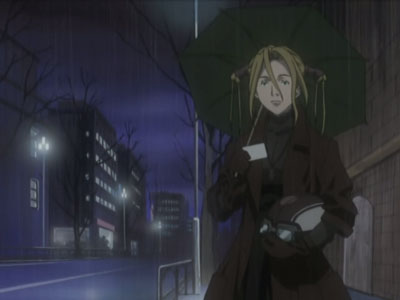 When Robin's Vespa runs out of gas during a rainstorm, she is picked up by a kind-hearted motorist. Shortly after dropping Robin off, the woman is killed in a horrible accident. Upset over her death, Robin senses that a Witch may have been involved. Together with Amon, Robin pushes forward to uncover the truth. 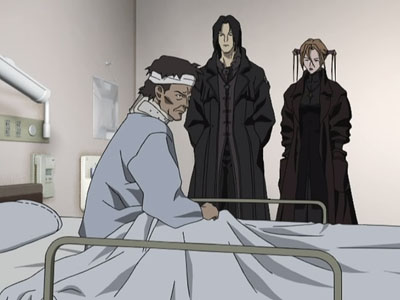 When a suspected thief's wrecked car is pulled from the harbor, the STN-J suspect there is more going on then a mere accident. When the go to question the suspect, however, he flees in his car, crushing Karasuma's vehicle with a powerful blow in the process. But, was it the thief doing the crushing or a more sinister force? Dr. Kirihara is touted as being a miracle worker; someone who even can heal people with terminal illnesses. However, the ‶miracles″ are really being done by another person; a doctor named Karosawa. Unfortunately, Dr. Karosawa performs these healings by using his power to take the life of someone who he feels is unworthy. It's an ethically difficult situation for the STN-J, who have been called in to stop him. 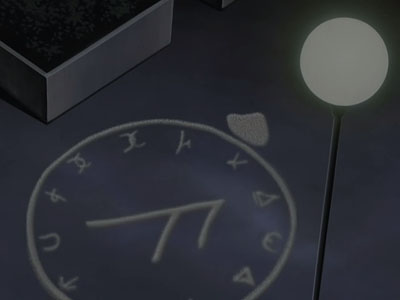 When two bodies are found apparently burned from the inside out, attention is drawn to Robin; whoever did this has the same power she has. A girl named Aki Yoshioka is the best suspect, but when the STN-J investigates they only find a pile of sand and a confession to killing three people on Aki's computer. Is the team chasing a ghost? 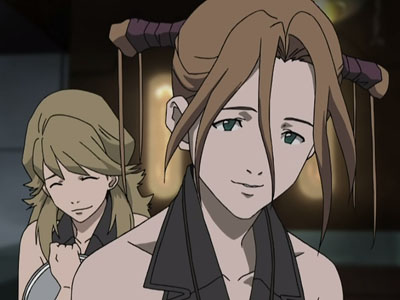 As part of an STN-J sting, Dojima and Robin take jobs as waitresses in Harry's bar. The man they're hunting was once betrayed to the STN-J by his own father, the owner of Harry's. As they wait for the prodigal son to return, the STN-J begin to realize that they're not the only ones after Yutaka Kobari.

let's say right at the beginning this is a anime from 2002 do not compare it to the anime in the future like a 2005 anime or more higher , that's have been a anime that i just have watched at the occasion at the **TV** but now i have watched the entire serie and now.. i can say** **we have a good little build-up but who have some hidden explanation who take a long time to be discovered but this anime stay on the good line but anyway let's begin.. ! <u>**About The Story**</u> the title say it <b>"Witch Hunter Robin" </b>thats related to what we doing in this anime yes.. we gonna hunt some <b>Witch </b>, and a girl named <b>Robin </b>will hunt <b>Witch </b>too with a <b>Organization </b>named <b>STN-J </b>with some others <b>Hunters </b>but that's not the kind of which we can imagine you can take this like a <b>Super-Power </b>and the <b>STN-J </b>is here for hunt them to prevent some bad things who can happen , but behind this we have some story who have a logic who take his place after <b>10-12 episode </b>this is a very slow build-up , at the beginning you can be bored because of the only minor events who look like not relate to the real story who gonna take place later , so like a said very slow build-up but don't be disappointed... if you follow each episode and continue the anime to the end you will like it a little bit more , this is a pretty nice little story i don't jump on the chair but that's good with a <b>End </b>that i like **(dont worry i spoil nothing)** <u>**About The Animation and Sounds**</u> for <b>2002 </b>that's have been a reasonable graphics but we have a lot of copy paste at the first **10-11 episode** and can come back sometimes during all the anime so yeah , for the **Opening and Endings** i find the <b>Opening </b>nice xD the <b>Ending </b>is a little good too but not better than the **Opening...** well i give you the links.. ! **Opening** **Ending** <u>**About The Characters**</u> well i want to talk about all of them but.. they are too much characters i will try to describe them into one text , at the beginning i have find everyone really have a bitches attitude but that's gonna past LOOOl , we have some good characters but i think **Robin ,** <b>Barman </b>and the **Chief** with his assistant** **are the most great person with a good attitude... the others are soo much bitch at the beginning... but they are not soo bad xD... , they gonna change later but i think **Robin** will be your favorite one because she is not rude at all , but **Robin** contain a lot of **Character Development** if you know what i mean.., if not .. she contain a lot of story about her compared to the others , we see just a little bit the story of some characters and some of them we don't know at all their story , but i can say to you... they will not stay with a bitch attitude after a time.. !  <u>**About The Enjoyment**</u> at the beginning some of you can be bored for sure , but not judge soo fast this is just because the build-up is slow and can be appreciated if you watch all the anime , you can like this anime after a certain time just take in consideration the slow build-up before saying that's not good , because that's a good little anime who have **26 Episode** and who are from **2002** but yeah pretty serious story who make the anime more good.. ! Give it a try this is old so don't compare it to the anime in the future , for me i have liked it i don't know if that's gonna be the same for you but before judge it watch the anime entirely , this is not everyone who can like this kind of anime and if you are not too much in old anime i don't know if you gonna be capable to watch it so just try , but don't judge this anime without finishing it.. !

Start a new discussion for Witch Hunter Robin anime. Please be fair to others, for the full rules do refer to the Discussion Rules page.