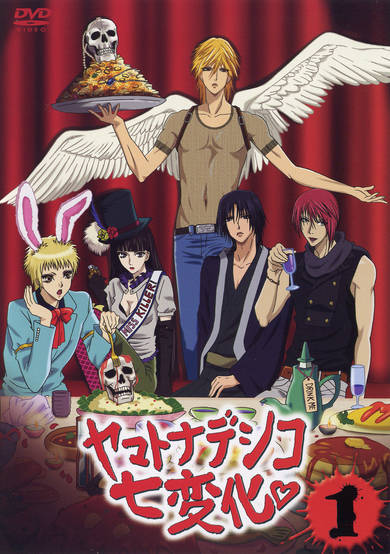 A Ray of Light in the Darkness

Four high-school bishōnen, Kyohei Takano, Takenaga Oda, Yukinojo Toyama, and Ranmaru Morii, have made a deal with their landlady, Mine Nakahara: if they succeeded in transforming her niece into a proper lady they can live in their home rent free, but if they fail the rent will triple. The niece, Sunako Nakahara, is poorly dressed with bad skin and no fashion sense whose bangs cover her eyes. She is also a heartbroken horror-fan who has spent two years as a hikikomori after being told she was ugly when she confessed to her middle-school crush. 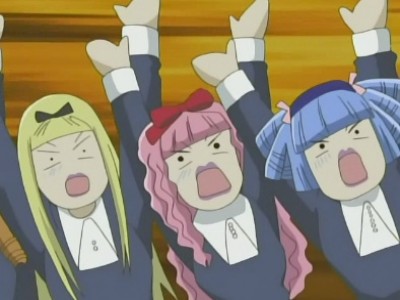 Pull Down the Iron Curtain!

The boys try to cut Sunako's bangs, with no success. After Sunako accidentally walks in on Kyohei bathing, he jumps out of the window in surprise and catches a cold as a result. They do not know this until Sunako has to defend herself against a gang of ganguro females, dressed in kogal fashion, as they try to cut off her bangs by force, due to their jealousy of her familiarity with Kyohei. Eventually, Kyohei saves Sunako, however ends up with a fever. Sunako has to take care of him which she does not approve of, debating whether or not to kill him. As she attempts to, the other three boys walk in, and a black hole forms, pulling them in. Four men of the Japanese host scene try to forcefully recruit Kyohei. Sunako doesn't think she can survive living around a bishōnen like Kyohei, as she plans to kill him. However, she has to save Kyohei from the recruiters who have kidnapped him for dubious purposes. Mine returns to invite everyone to a coming out party for Sunako, by which the boys have to make Sunako a lady as soon as possible. 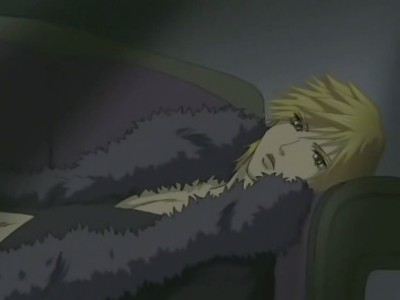 Sunako's class recruits her to make a haunted house for the school festival, only for Kyohei to realize that she was conned by the class president. Kyohei recruits the guys to help make her haunted house win the contest of the school festival so he can get the prize. They ultimately win the contest, however Kyohei is left to claim the prize, since the other three refused to accept it. Unfortunately, Kyohei is forced to pay for the damages caused by the explosion inflicted earlier. 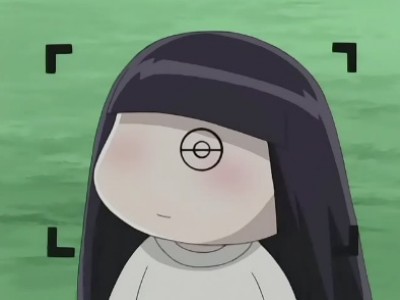 Feast of the Beautiful Creatures

A picture of an angry Sunako from the festival catches the eye of an egotistic photographer who wants her to model for him. Although tricked into going to the shoot, a camera-shy Sunako proves a difficult subject. The four bishōnen are soon dragged into replacing Sunako in the modelling shoot, however they take leave with Sunako after the photographer explains the difficulty shooting Sunako. The five of them later go an exhibition of where a picture was discreetly taken of them, as it turns out that the photographer used that picture as the greatest attraction in the exhibition. 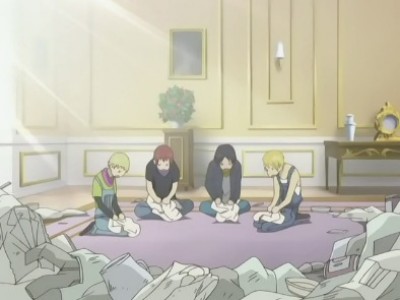 A Halloween Seen in Dreams

When Sunako becomes ill, the four bishōnen is left with a household of chores. They unsuccessfully attempt to clean, by which they figure out, with the help of Noi, that Sunako misses Halloween, being her favorite holiday. They later throw a Halloween party to cheer her up. 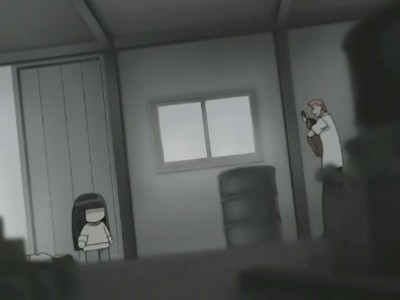 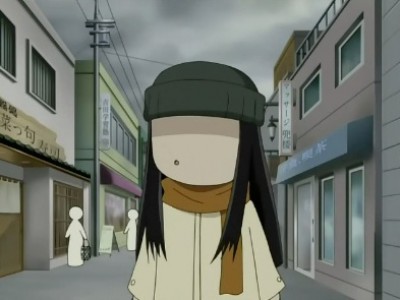 The boys wonder if they're taking advantage of Sunako's cooking, and get a job at a fancy restaurant in order to lessen her burden. Kyohei wishes to eat nabe at a kotatsu, as he has never experienced the winter tradition. Kyohei goes shopping with Sunako, only to have the entire marketplace misunderstand their relationship. To add thing up Kyohei's fangirls appears and play around their grocery. Kyohei later lends a shopkeeper a helping hand, in return for some vegetables. Meanwhile, Sunako goes out to construct a kotatsu. In the end, they end up having an enormous kotatsu feast. 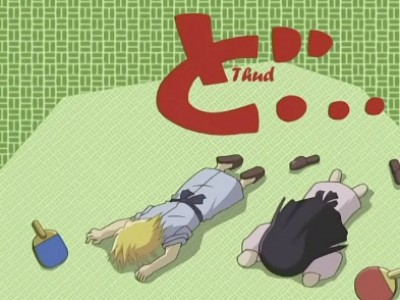 Splashing Blood and Steam, Inside a Shower of Love (Part 1)

The boys take Sunako, along with Noi, on a trip to the hot springs. Sunako tries to do everything she can do so that Takenaga and Noi can be alone, which leads to the fact that Kyohei and Sunako have a very intense ping-pong match. As the match ends, it is shown that Kyohei and Sunako share a kiss by accident. 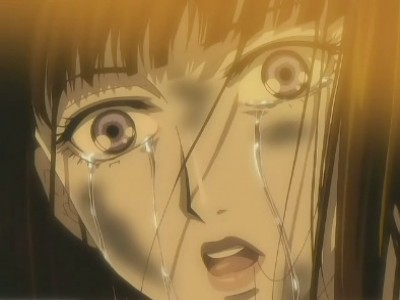 Splashing Blood and Steam at the Onsen (Part 2)

The hot springs manager has been attacked, and Sunako decides that she cannot pass up the opportunity to snoop around a real crime scene. However, the true culprit resents not only Sunako snooping around, but also her being accompanied by the four bishōnen. It turns out that the wife of the manager is responsible, plotting to kill Sunako by burning her alive in the storage room, by which Kyohei is able to rescue her out of. When they confront the wife of the manager, who insults Sunako's appearance, Kyohei states they have kissed.

If you enjoy Ouran HIgh School Host Club. You will definitely enjoy this show!

Yamato Nadeshiko Shichi Henge otherwise know as perfect girl evolution is an anime about a emo girl living with 4 pretty boys who are trying to teach her how to be "normal". The interaction between her and the rest of the world is extremly amusing and in some areas of the anime she turns into a badass MC. This anime is just such a good comedy and i defiantly recommend it.

Start a new discussion for Yamato Nadeshiko Shichihenge♥ anime. Please be fair to others, for the full rules do refer to the Discussion Rules page.