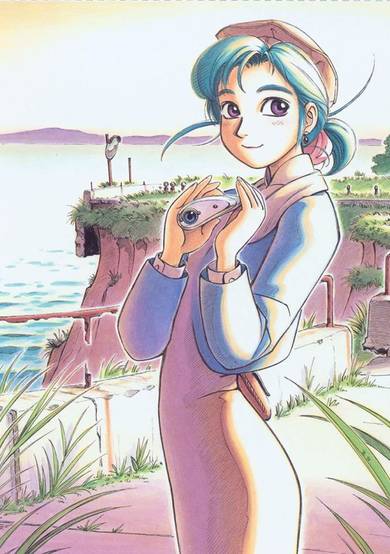 This is not so much a story as it is a slice of life. Or rather, it is a look into portions of the life of a girl named Alpha, together with the people around her. Alpha runs a little cafe on the outskirts of Yokohama. There are almost no customers, but Alpha does not mind at all since she has the occasional company of the old man who runs the gasoline stand down the road, as well as that of his grandson Takahiro. This is a Yokohama of the future, when the sea covers most of the land and roads have disappeared under sand or water. Alpha is in fact a robot, looking after the cafe during her owner's indefinite leave of absence. (Source: AniDB)
User Count3161
Favorites Count19
Start Date21st May 1998
Next ReleaseInvalid date
Popularity Rank2719
Rating Rank2451
Age RatingG
Age Rating GuideAll Ages
SubtypeOVA
Statusfinished

This Yokohama Kaidashi Kikou OVA is based on a 14 volume Slice of Life manga by Mangaka Hitoshi Ashinano, that was being Serialized by "Afternoon" from 1994 til 2006. This OVA adapts some of the chapters from volumes 1 - 3 of the manga. Does this OVA do it's job of bringing the manga to life? In my opinion... No it doesn't. A couple things it does is be (Mostly) faithful adaptations of its chapters that it chooses, and you get to see all of your favorite characters animated. But the atmosphere of the manga is not captured. They also took out small comical section, and even some dialogue. (For informational purposes, the manga does not contain very much dialogue in the first place, so to omit any is questionable to me.) In the manga, you get a slow slice of life story. Therefore, it's not going to have much action in it; But there is a story. This OVA took the Slice of life aspect WAY too far. If I saw this before reading the manga, I wouldn't have been interested. Because in both of the episodes NOTHING HAPPENED! You can read the manga at a fast pace. I can literally read an entire volume of Yokohama Kaidashi Kikou, and then some (With comprehension mind you), in the time it takes me to watch one of these OVAs. It's a seriously quick read. And with that, comes to the main point. This OVA is SLLLOOOOOOOOOOOOOOOOWWWWWWWW!!!! I'm not kidding when I say it is the slowest series I have ever seen. And it's not even adapting every chapter out of the 3 volumes. I think it's 8 out of 23 chapters short chapters. One of them being the OP and ED, os basically 6. Looking through the 3 volumes now, they could have picked much more entertaining chapters than the ones they did choose. There's some sceneic imagery in the manga, but only when it's needed. The OVA is FILLED to the brim with scenic imagery, almost to the point of annoyance. It makes the series unnecessarily slow paced. There's vertually no music. There's the OP (Song), a weird interlude section in the middle of each episode (Another song), and the ED (Instrumental). That's all the music. I think it's only 4 whole pieces. The music you did get to hear was good. The music was composed by the duo Guitar group Gontiti. The seiyuu were a good choice. If you don't like them at first, you'll get used to them after one episode. The animation is that kind of smooth OVA animation you expect in the 90s. \_\_\_\_\_\_\_\_ I conclusion, I would not reocmmend this OVA unless you have read the manga before watching; and even then the novelty of the characters being animated lasts for only about 10 minutes, and the rest is just SSLLLOOOOWWWWW paced. I HIGHLY recommend the manga; not this OVA.

Yokohama Kaidashi Kikou covers a few days in the life of an android named "Alpha". This short, OVA series doesn't really have a story, but covers several minuscule events of Alpha's life. The main focus isn't that, however, but Alpha's mental state the viewers watch to witness how she appreciates her existence and the world around her. This OVA shouldn't be picked out for a viewing if one's intentions isn't to watch something relaxing, as that's clearly the main goal of what's presented in this visual piece from the manga. The visuals for Yokohama Kaidashi Kikou are wonderful and done with a great deal of care, having precision colors and hues throughout the two episodes. There's a good amount of really solid animation and the detail of the art is kept at a consistently high level all the way through. The color scheme varies drastically, having sent out a rainbow of colors by the time it's all over. The sound of this OVA is phenomenal. While there isn't much music in place, the sound effects offer a consistently amazing atmosphere that, added alongside with the wonderful visuals, is what brings out the main goal of this mini-series. The audio and sound creates a calm and soothing environment, and it may even bring out nostalgic feelings from being at vacation beach homes or the like. The opening and ending are also very soothing, but might not be extremely memorable in the long run. In the basic budget category Yokohama Kaidashi Kikou was already doing great, but with the direction in place, the potential of this budget peaks to the maximum. The manga not being relevant to this enclosed review, this OVA series doesn't really display much detail or background information of its characters and setting. It could be that the story takes place in a post-apocalyptic setting, as there are many shots of a grand city submerged underneath water, or there could've just been a natural disaster that took place. Either way, the sensation when looking upon the submerged city always seems to collide with the calmness and peacefulness of the main character's gaze. That isn't a negative, as it just displays the emotional directing taking place that is done extraordinarily well. I would almost recommend Neon Genesis Evangelion to those who like this specific OVA as the direction in both series are very similar, suddenly not being surprising when taking note that the art director of Yokohama Kaidashi Kikou just so happens to be the same person who worked on all of the Evangelion franchise. There's also some similar symbolism to Evangelion, which could likely not be symbolism to be honest. The lens on Alpha's camera along with the emotion of the submerged city just creates the impression of a message attempting to be sent. The characters aren't really developed in their details, but they are all interesting and pleasureful to watch. The main character, in particular, is still not given much of a detailed background, but the moments the OVA places her pondering the world around her makes the audience feel as though they form a connection to what she's like. Alpha, along with the several other characters, all share the trait of being innocent and living in an innocent habitat. The characters ice the cake of the relaxation this series creates as it shows a slice-of-life presentation of these character's lives. While this show seems to clearly have a goal from how it was carried out, and in that goal it marks off the charts, there are still elements lacking to evolve Yokohama Kaidashi Kikou into a fully-fledged experience. I don't doubt that the manga meets some of those aspects that would put it above this animated section of it, but what's being presented and critiqued here is something that doesn't feel whole. That's in no way required to be able to enjoy something and be satisfied, but I don't see having a more detailed experience creating any new negatives. When in the mood to feel relaxed, maybe before going to sleep, Yokohama Kaidashi Kikou shouldn't be an option to pass up. With its superb visual style and sound effects, the OVA series is able to mold a consistently calm and charming atmosphere. The characters also help in that process by living out their roles in utter peace and euphoria. Dialogue is kept to a minimum and the majority of emotion is sent out by dynamic, visual cues from characters and in the show's environment. That wonderful direction, done by the man who worked on all of the Evangelion franchise's art direction, carries the show. That might be enough for many people, but that might also not be enough for many others. Yokohama Kaidashi Kikou is an experience, and a good one, but it's lacking in story elements, world-building, and character information. The show simply focuses on its atmosphere and tuning it to perfection. Yokohama Kaidashi Kikou is not for everyone and for one to truly enjoy it they must know what kind of show this is before diving in.

Start a new discussion for Yokohama Kaidashi Kikou anime. Please be fair to others, for the full rules do refer to the Discussion Rules page.