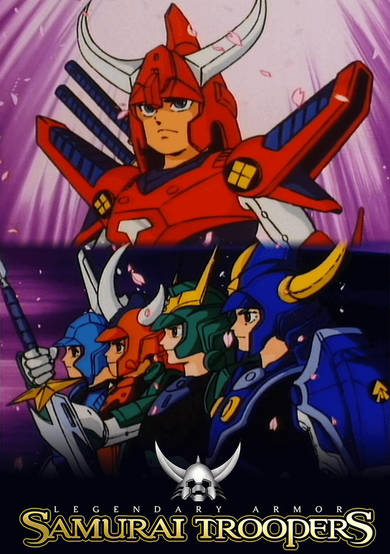 Thousands of years ago, the evil emperor Talpa attempted to conquer the Earth. Defeated, he was banished to the Nether Realm and his armor was divided into 9 separate suits. Now, he has returned to conquer Earth, having reclaimed 4 of the suits. The other 5 are in the possesion of those who are the only hope of stopping him: The Ronin Warriors. (Source: ANN)
User Count1363
Favorites Count13
Start Date30th Apr 1988
Next ReleaseInvalid date
Popularity Rank4206
Rating Rank3380
Age RatingPG
Age Rating GuideTeens 13 or older
SubtypeTV
Statusfinished It seems to be a normal, nice day in Touyama, when a cloud gathers overhead and casts a strangely shaped shadow on the buildings below. Demonic laughter resounds. In a room at a university nearby, Mia Koji is busy with a computer, working for her grandfather, Doctor Koji. Her grandfather is worried. The armor of the Ronin Warriors have disappeared, which could mean that the Demon Lord Tulpa -- whom he has researched for years as a folklorist -- may be ready to manifest once again. (Unfortunately, the symbols which show up on the computer screen are so much garbage, not a real readout even in Japanese...) In Touyama's shopping district, Yuli and his parents are window-shopping when Yuli almost runs into White Blaze -- and gets a wet lick as a greeting from the huge white tiger. Then the tiger's human companion (partner more than master), Ryo, speaks with him. Yuli's parents then pull him away, fearful for his life, as Ryo and White Blaze continue about their business. But someone has The Assault of Shiten, Warlord of Demons

Photographs from a photo-reconnaissance satellite reveal a small circle of nothingness, where the camera refuses to pick up an image, in the area of Shinjuku. Japanese Defense Force helicopters try and move in, reporting the prescence of Talpa's Dark Castle, but their motors shut down when they reach Talpa's area of influence. When one tries to autorotate down, one of Talpa's warriors splits its fuel tank open with a spear, and it explodes. Technology does not work where the Demon Lord's power holds sway, and Talpa seems to actually absorb power from such sources. Inside the castle, the warlords are getting orders from Talpa. It rapidly becomes clear that Anubis is disliked by his fellow warlords, and Talpa's selection of him as the first to go against the Ronin Warriors is greeted with a mixture of rage, irritation and frustration as the others argue that he is too junior for the honor. Talpa shows Anubis where the Ronins, Mia and Yuli are hiding -- in the subway -- and dispatches A 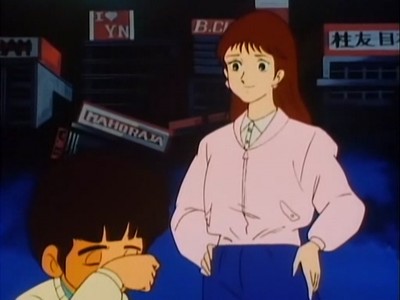 The Secret of the Wildfire Armor

Yulie and Mia climb out of the rubble they have taken refuge in to sleep through the night as the city crumbles around them. Then Jun notices a growing glow not far away -- it is one of Ryo's katana's, the one he lost in his battle with Anubis. Mia grabs it up as White Blaze arrives. In ""tiger talk"" he makes it obvious he wants them to follow him. Deep inside Fuji, Ryo slumbers in the middle of a lava pit -- then slowly begins to wake. In the audience chamber of Talpa's castle, Anubis is looking at the view screen/magic mirror (""Mirror of Youja"") down at the city below. The other Demon Generals arrive and twit him about the fact he didn't really win his first battle -- Talpa did it for him. Talpa interrupts them angrily, as it seems the Troopers are still alive, if dormant. Talpa cannot touch their yoroi and twist them to his own use until the present wearers are dead -- or have been converted to his side. Further, it seems Ryo of Wildfire is beginning to wake. The scene on the mirror The Trap of Naaza, Warlord of Venom

Ryo, Mia, and Yuli decide it best to head back to the University in hopes that Mia's grandfather will have some kind of clue as to the location of the other four Ronin Warriors. Meanwhile, Talpa, still a little miffed at Anubis for failing to destroy Ryo, sends Sekhmet to try his hand at defeating the Ronins. Sekhmet arrives at the university before Ryo and sets a trap, possessing Mia's grandfather with a shadow demon. They make a pit stop at Yuli's house, where he finds his parents still missing, and vows to not only help Ryo defeat Talpa and the Dynasty, but to take care of his mother's garden as well. Ryo, Mia, and Yuli arrive, and Yuli finds a polaroid camera and starts taking pictures. Mia tries to coax some info from her grandfather, but all he keeps talking about is the end of the world and mankind. White Blaze spots Sekhmet on a nearby rooftop and growls, stalking out of the room. Yuli turns to snap a picture of some armor in the room and the armor's eyes light up red. Ryo jump 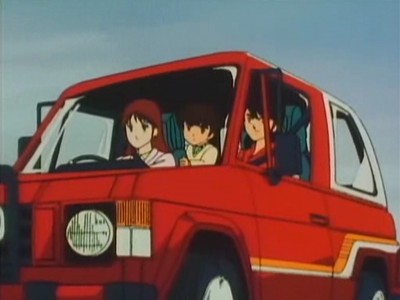 Ryo, Mia, and Yuli, have deciphered the poem to reveal the key phrase in finding Sage of the Halo. ""The Darkest Prison sheds the Light"". This leads Mia to believe that Sage is buried deep within the Pinnacle Cavern System (wouldn't ya know it, she was right too!) Ryo and the gang go to Pinnacle to find Sage, but instead find a rather irritated Sekhmet. Sekhemet reveals that he let Ryo believe that he had killed Sekhmet, so that Ryo would lead him straight to Sage (a trend that follows through the next five or sixe episodes, that conveniently, none of the warriors ever catch onto). Ryo engages the warlord, telling Mia and Yuli to run, he immediately notices a difference in the strength and speed of his armor. He seems to have the upper hand, until Sekhmet threw six katanas, all six dripping with poison, at Ryo. Ryo dodged them all, but one came too close and dripped the poison into Ryo's wide open eyes, blinding him. Sekhemet was about to deal the final blow, when White Blaze rushed in 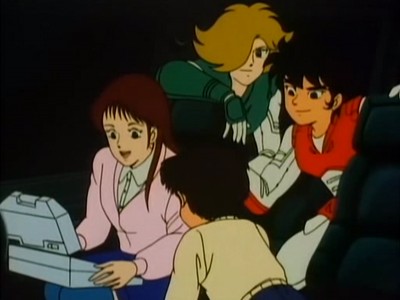 The key phrase ""Churns beneath the Swirling Salt"" leads Ryo, Sage, and the gang to a river where three whirlpools mark Cye of the Torrent's under water resting place. Sage and Mia rush to the north to find Kento, while Ryo, Yuli, and White Blaze stay behind to revive Cye. Ryo boasts that the rescue mission will be ""completely routine"" (a good example of his cockiness in the early episodes) but Sekhmet stands by and watches from a safe distance, plotting to destroy Ryo and Cye with one swoop. Ryo dives into the water, and runs into several of Talpa's spear throwing goons. After a while, he transforms into his armor and quickly dispatches them, before continuing on to Cye's resting place. Meanwhile, Cye senses Ryo's presence, but is unable to wake himself up from the suspended animation. He's surrounded by three whirlpools, several hundred fish, and an orca more commonly known as a killer whale, all seem intent on keeping him safe. Ryo begins to feel sharp pains and his armor begins spou Sage and Mia drive as far up the mountain as they can go, in search of Kento of Hardrock, bu eventually have to walk, Sage tells Mia to go back, but, being the stubborn one that she is, Mia refuses and follows after Sage. Mia meets up with Sage while he's being attacked by a pack of feral wolves. He quickly dispatches of them, but they just keep coming, Sage and Mia run for it, but Cale, Warlord of Corruption, causes an avalanche with the intention of hitting Sage. However, Sage grabs Mia and jumps clear of it's path, letting it take out the wolves instead. They continue up the mountain until they reach ""The Throne of the gods"", an enormous boulder that Mia believes Kento is resting inside of. Cale appears, thanking them for leading him to Kento. Sage panics and attempts to hastily revive Hardrock, but fails, Cale engages him, then stops long enough to stab his sword of darkness into the boulder, which then begins magically crawling deeper into the rock, it's tip searching for Kento's 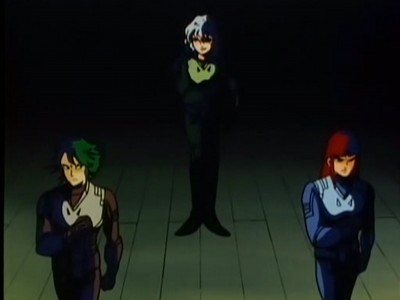 Rajura, the Warlord of Illusion’s Trick

In Talpa's throne room, Dais: Warlord of Illusion, mocks and taunts Anubis and Sekhmet on their failure to kill the Ronin Warriors. Then boasts that he alone has the plan that will be their demise, Talpa seems overjoyed and eagerly sends the sadistic one-eyed man off to stalk his prey. Meanwhile, Mia, Kento, and Sage are driving quickly to meet up with Ryo and Cye so that they can go find Rowen of the Strata, Kento is stuffing his face with burgers in the back seat, while Sage complains about his over confidence from the front passenger seat. Ryo, Cye, Yuli, and White Blaze are at a deserted temple, resting, and contemplating strategies to bring Talpa down, when Yuli steps into a room filled with eerie burning candles. He starts to feel calmed by the cnadles, then one by one they go out, and Dais reveals himself, snatching Yuli and taking him to the roof of the temple. Ryo and Cye counter attack and rescue Yuli, it seems to be evenly matched at first. Until Dais uses his attack ""Web Of Wildfire Rescues Toma of the Heavens

After discovering the location of Rowen, Ryo and Kento leave for the city against the wishes of Mia and the other two Ronins. Talpa, in an attempt to destroy Rowen of the Strata, summons forth his Nether Spirits in order to summon a ball of energy that can be fired up into space. Ryo and Kento realize what Talps intends to do, and hurry to the abandoned building where the energy balls are being created and fired from. Once there, Ryo and Kento are confronted by Anubis, whom has been charged with dark energies by the Nether Spirits. Ryo with the aid of Kento, are able to subdue Anubis. Ryo then jumps into the energy ball, in a last attempt to save Rowen. Mia, Yuli, Sage and Cye arrive in the city in time to see the energy ball fly into space, with Kento walking to great them. Ryo is stuck inside of the Energy Ball, as it drains the power from his armor. Fighting the energy inside the ball, Ryo is able to pull off his Flare Up Now attack, which effectively destroys the ball but sends him floating off into space. Ryo's armor seemingly awakens Rowen, who uses an arror to pull Ryo over to him. Rowen then sends Ryo and himself back down to Earth. Meanwhile, the other three Ronin Warriors are fighting Talpa's forces in the city. Talpa uses the destruction of the energy ball as a way to taunt the Ronins, trying to convince them to give up by saying that their friends have died. Anubis, having been affected by Ryo in their last battle begins to awaken to the virtue of ""Loyalty"" which concerns Talpa. Anubis goes out on his own to fight Ryo in fair terms. However, he discovers that Ryo is not in fighting shape and as such, cannot bring himself to kill Ryo. Rowen attacks using his ""Arrow Shockwave"" cracking Anubis's helmet in two. Talpa, obviously angry at

Start a new discussion for Yoroiden Samurai Troopers anime. Please be fair to others, for the full rules do refer to the Discussion Rules page.