One fateful day, Yuusuke Urameshi, a 14-year-old delinquent with a dim future, gets a miraculous chance to turn it all around when he throws himself in front of a moving car to save a young boy. His ultimate sacrifice is so out of character that the authorities of the spirit realm are not yet prepared to let him pass on. Koenma, heir to the throne of the spirit realm, offers Yuusuke an opportunity to regain his life through completion of a series of tasks. With the guidance of the death god Botan, he is to thwart evil presences on Earth as a Spirit Detective. To help him on his venture, Yuusuke enlists ex-rival Kazuma Kuwabara, and two demons, Hiei and Kurama, who have criminal pasts. Together, they train and battle against enemies who would threaten humanity's very existence. (Source: MAL Rewrite) 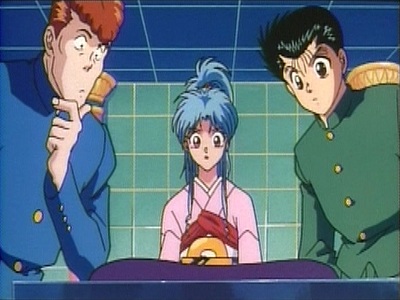 Surprised to be Dead

The spirit world is flooded out because of the supposedly banished King of the Netherworld, Yakumo, has found a way to return and is going to take vengance on the Spirit World. Botan barely escapes with her life. Yuske, Kuwabara and the gang are joined by a new spirit guide named Hinageshi on their quest to save the Spirit World and protect Botan from dying. 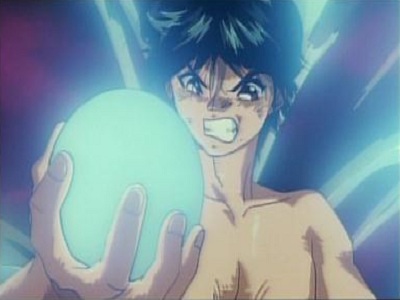 Koenma of the Spirit Realm! A trial Towards Resurrection.

This is part 1 of the Poltergeist Report movie. The story begins in the Spirit World, where the River Styx is overflowing, due to a tsunami. But as Koenma looks out his window he can tell this is no ordinary storm. The floodwaters continue to rise, and just before they become too much for Koenma he gives a mysterious item to Botan, and tells her to give it to Yusuke Urameshi. But Botan gets hurt badly and barely makes it to Yusuke. Botan is too weak to give Yusuke the item. Throughout most of the movie she’s unconscious and is unable to do anything, while a great evil is surfacing. The storm was apparently caused by the forces of the Netherworld, which was banished into cold space ages ago. All this happens pretty quickly, and so does the fighting. We get to see Yusuke and the others do their signature attacks, against some of their toughest opponents yet. To restore balance in the now flooded Spirit world, Yusuke and the others must track down five spots on Earth that contain a large amount of spiritual energy. But their simple plans get turned upside down when the ruler of the Netherworld, Yakumo, and his three henchmen decide to use the same energy for evil. So, the race begins to save the Spirit World, and now the Human World as well. 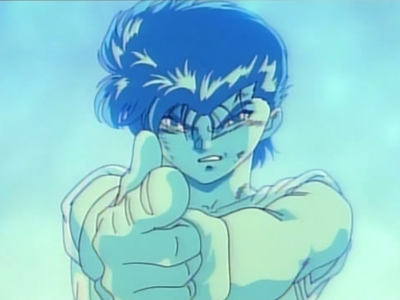 Kuwabara in a Corner! A Man's Oath.

This is part 2 of the Poltergeist Report movie. 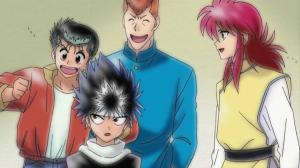 Koto attempts to interview Team Urameshi (who are all silent and ready for battle) but is frightened by their answers. When Kurama starts exuding the aura of his Yoko form, she runs away, and is pelted by trash thrown by the audience for her failure. 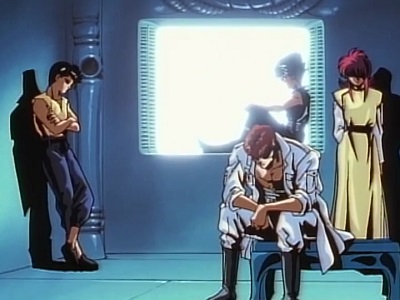 Yusuke has several strange dream sequences, including ones in which he is married to Botan, and another in which he accidentally gropes a woman who resembles Genkai. 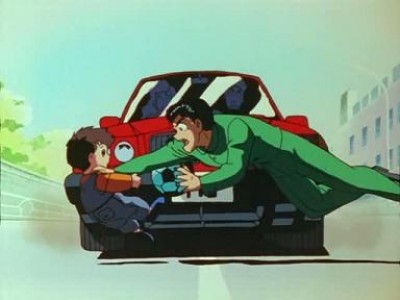 Yusuke Urameshi is having a typical day. He's cutting class, arguing with teachers and getting into fights with his rival Kuwabara. But then Yusuke does something that betrays his killer rep. He dives in front of a speeding car to push a little boy out of harm's way! Yusuke has sacrificed his life for the sake of another, but is this really the end of this brash young man? 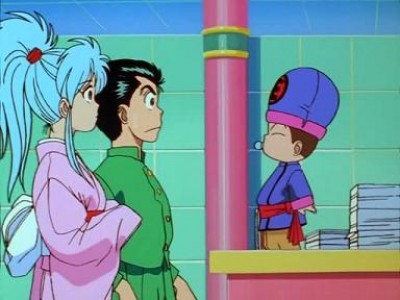 Pulled by the sprightly, pink-robed Botan, Yusuke enters a realm that is not quite normal -- the Spirit World. There, Yusuke meets Koenma, a 700 year-old ruler with the body of a toddler, pacifier and all! But there's no rom for laughs as Koenma gives Yusuke an ordeal to restore his life. Hatching a Spirit Beast! 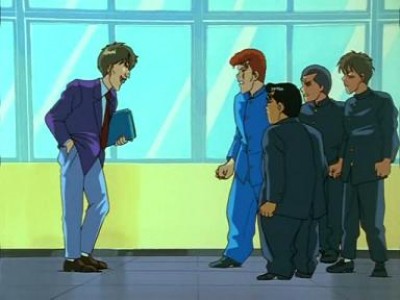 The Three Eyes of Hiei

Kuwabara was tormented by his rival's death. The loser in all 156 of his brawls against Yusuke , he's now lost any chance he ever had of evening the score! But with Yusuke out of the way, Kuwabara is the new kid to beat... which means he's making plenty of enemies. Yusuke isn't fond of this classmate, but if he wants to win back his life, he will need to give him a ghostly hand. 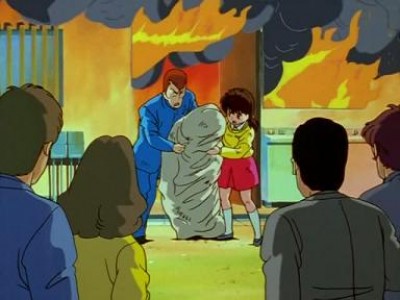 The Spirit World forgot an important question -- does anyone want Yusuke back? Koenma sends an Investigator to find out, and Yusuke's friends answer quickly when a fire threatens to char his earthly body. But will Yusuke give up the Spirit Beast, his one chance for revival, to rescue his friends? 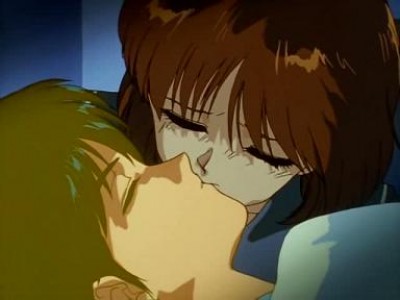 Yusuke has reclaimed his life, but has only one day to be revived by someone's kiss -â€” And that someone might be Kuwabara! Back in the flesh, Yusuke finds he can see supernatural creatures hiding in the living world, and quickly hunts down a demon criminal. With this move, he learns his adventure is only beginning. Yusuke is a Spirit Detective.

Also known as the legendary **Ghost Fighter** in Philippine shores, this is probably the only shounen show that rivals Dragonball Z in terms of massive popularity (in this country at least). This is prime example of how to make a PROPER shounen show; simple, action packed, and with a small ragtag crew of boys with special powers. No matter how you look at it and no matter how much it evolve, it is still an acceptable formula. This the reason why Hatekyo: Hitman Reborn became popular in the first place. Having said all of this let us go into details. First and foremost this is a shounen show, so screw anything that involves logic and common sense. The world is in dire need of a hero to protect the humans from the demons coming from the demon realm, and they hired a dead 14 year old boy to do their dirty work. Gazillions of episodes later, we found out that that boy is a prime candidate for the demon lord because he is son of the former one to begin with. So yeah, crazy storytelling, but this is how shounen shows are made anyway. Tried and tested, but it works, and it cannot always be a bad thing even by today's standard. But if you ask me if this formula is something to admire, not really. But my point is, every main protagonist in shows like these must always have the certain "plot armor" to keep the story at least a bit interesting for non dedicated fans. Things will get dragging, true, but this is still shounen and this is how things work since the genre began. Character wise, we have a cast of cookie cutter tropes, a main protagonist who has tougher than diamond willpower, "that" loyal friend who is annoying but turns out to be powerful ally, that silent guy who is overpowered, hostile, and unadmirable at first but turns out to be soft on the inside, and that cool bishie that fangirls will swoon over. Might take time to appreciate them but since this show has plenty of episodes, we are given a so many chance to get to them each of them better. Want something to truly admire? The music, of course. 90s animes like these are never short of memorable soundtrack, and the added fact that that they did not change the opening theme the entire time made that song an instant classic. Cannot nitpick on the animation nor the voice acting for the standards back then are truly different from today's standard, so let's just leave it at that regardless of how low quality you thought they might be. Overall, a pretty solid show despite being overly generic even by 90s standard. What's important is that it remains constantly enjoyable all throughout.

Probably my favorite anime ever. I went on a journey in my junior year of high school for the whole show on DVD and got the whole thing and have rewatched it twice since. Yusuke was my hero as a kid and this show just means a lot to me. It has great characters and character development for a pure action show like this and I personally think the filler is entertaining enough that it isn't annoying. Great, great show.  GREATEST ENGLISH OPENING SONG EVER.

I have to watch it once a year or I feel like I cannot function since I have grown up with it. It is a very addicting anime and it basically helped shape me into the person that I am today.

one of the best fighting animes of all time.if u like dbz,man u gona love it..fights are so damn kool and brutal.

This was my first anime when i was growing up in the 90's and i love it, all of the feels and its always in my top 3

Start a new discussion for Yuu☆Yuu☆Hakusho anime. Please be fair to others, for the full rules do refer to the Discussion Rules page.